When it comes to new MP3 players and PMPs, personality now matters. The days when you could stick out a basic, black box with a drab interface and a serial number for a name are gone. People want a little glamour. They want a little style. This is something Apple understands with its instantly recognisable names and form factors (nano, shuffle, touch) and that rivals like Samsung, Creative, Sandisk and Sony have also got to grips with. Even smaller manufacturers like Cowon and iRiver are going out of their way to give their players some charm school education, as the likes of the Clip, View, S9 and P7 demonstrate.


Philips has been late getting with the program, but if the new line of GoGear players isn’t a huge move on stylistically from last year’s crop, at least the old SA6045/02 style names are being sidelined in favour of some more catchy nomenclature. Just as the shuffle-sized SA2840 has been updated to the cooler-sounding GoGear Spark, so the SA5285 has been replaced with the spanking new GoGear Opus. It’s a name with a nice, classical weight to it, even if its musical connotations aren’t totally positive (if you saw the eighties first-hand, check out Opus, the band, and shudder). 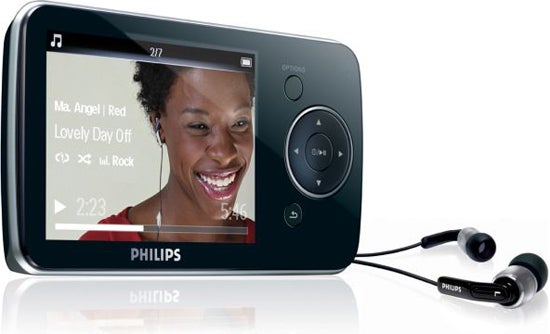 Of course, we would be even happier had Philips take a second look at the physical design as well. I haven’t got an SA5825 here to make direct comparisons with, but the Opus seems, if not virtually identical, then at least very similar. The front has a glossy, piano black finish with the 2.8in, 320 x 240 pixel screen on the left and a four way D-Pad plus two function buttons on the right. The rear is plastic, but styled to look like brushed aluminium, and there’s a nice silver trim around the edge. In other words, check the old review and start playing spot the difference.


The Opus isn’t a bad looking beast in its own understated way, but there’s something conservative about the whole look. If it were a car, the old SA5825 would have been a Vauxhall Vectra, and it wouldn’t have hurt Philips to think outside of the box and give us something more like the Insignia this time around. As it is, the Opus is solid, well-built and far from ugly, but – well – it doesn’t exactly set the geek heart racing, does it?

Philips also seems to have played it safe with the user-interface, again sticking close to the SA5825’s GUI. After recent efforts from Apple, Samsung and iRiver, the Opus’ primarily text-based interface feels staid, but at least it’s easy to understand and reliable, with videos, albums, tracks and the various options selectable from a series of nested lists, with the current option highlighted and those further up and down the list getting dimmer as you move away from them. Press the button lightly, and you flick down one item. Press it harder, and the list scrolls at a higher speed.


Otherwise, there’s not much in the way of flashy stuff. It’s possible, for instance, to pick an album from a grid of cover art, but nobody is going to suggest this has the wow factor of Apple’s CoverFlow. In fact, the most interesting feature is a facility to, while browsing albums and playlists, get instant control of playback through a pop-up window. It’s a nice idea, but I’d be more impressed if playback didn’t stutter and pause as you were browsing through your tracklists. In fact, for a UI with few graphical bells and whistles, the interface can be surprisingly slow at times, most notably when the device is starting up or when it updates after you add new music or video. What’s more, I’ve had it freeze on me on one or two occasions. I’m hoping these issues are confined to this particular, pre-release review sample, and will be fixed by a firmware update before launch. 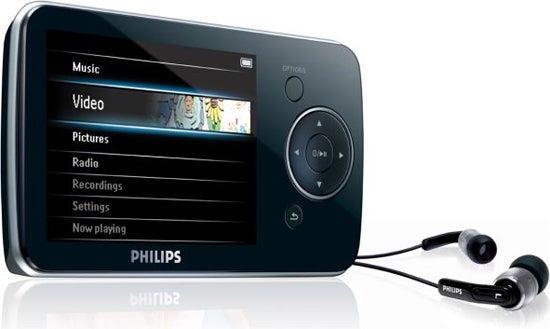 The Opus is also running short on additional functions and features. We get an FM radio with recording capabilities, a voice recorder and a picture viewing app, but that’s really all. Still, what really matters with a PMP isn’t the gimmicks and extras as much as the performance.


Here there’s no really bad news, but the verdict isn’t totally, two thumbs up positive. Let’s start with video. On the plus side, playback is nice and smooth, with clear sound and the reasonable size of the 2.8in screen standing in the Opus’s favour. Better still, the Opus has embraced iPlayer, and will play any mobile programmes you download without any issues.


On the downside, the LCD screen isn’t incredibly bright or incredibly clear. Seen on its own, it’s perfectly adequate, but pitch it up against the smaller screen on the Samsung YP-Q1 or the larger touchscreens on Samsung’s YP-P3 or Cowon’s S9, and the Opus would not be the stand-out player. What’s more, format support remains an issue. Only MP4 AVIs and WMV9 files are supported, and even these have to be at a 320 x 240 or lower resolution to play back. A Philips branded version of Arcsoft Media Converter is provided, which will convert most file types without much difficulty to the preset output settings, but the Opus could do with being a little more flexible in this respect.

Luckily, the Opus does better in the audio department. For one thing, in a world where nearly every PMP comes with rotten, substandard earbuds (with the exception of a few models from Sony), the Opus ships with a pair of half-decent canalphones. The signature is a little bright for my tastes, but get the fit right – three sets of silicon tips are provided – and you get a solid, clean sound with just enough low-end depth for most kinds of music.


Running through tracks from Massive Attack, Pearl Jam, Mastodon, One Republic, Ladyhawke and Miles Davis, I found the noise emanating from the earphones perfectly listenable, and while I was itching to put a pair of Grados on my ears, at least I wasn’t tearing the Philips headphones away in disgust.

Hook up something more substantial, and the Opus reveals hidden depths. With its last generation players, Philips added in an enhancement mode, FullSound, aimed at restoring detail lost to compression and creating – you guessed it – a fuller, more Hi-Fi like sound. With the Opus playing through a pair of Sennheiser HD595s, it seems to work, adding depth to the bass, a distinct sparkle to the high end and a degree of presence across the board.


The Opus can cope with the complex, hard rock dynamics of Mastodon’s Crack the Skye, separating out the layers of bass and guitar and not allowing the drums and cymbals to grow too dominant or too sibilant. Throw it something more subtle, like the rich, atmospheric tango of Gidon Kremer’s Homage to Astor Piazolla, and it still shines, delivering mournful violin, sweet clarinet and plucked double-bass with real finesse.


Justin Timberlake’s pop comes through with punch and energy, while Notion, from Kings of Leon’s Only By The Night, is every bit as majestic a stadium rock anthem as it should be, the guitars, bass, drums and vocals powerful and clear.

The Opus escapes one criticism of the old SA5825 in that it’s easily loud enough to drive a pair of full-sized headphones, and while I wouldn’t put it up there with such star performers as the Sony NWZ-S639F or Cowon S9 for punch or musicality, it’s certainly above, say, the iPod touch in terms of audio quality. The only criticism I would have is that the sound isn’t particularly customisable. We get a series of preset EQs, but switching these on means switching FullSound off, so you may have to experiment with different material to see whether a little extra bass or a scooped rock sound is worth losing the benefits of the audio enhancement for.


The Opus also fares better than the average player for audio format support. Beyond MP3 and WMA we also get AAC and FLAC, though Philips still has its work cut out with the latter. Several files I tried suffering from distortion, weird artefacts or simply playing at entirely the wrong speed, though again a firmware update could easily fix this in the future. Battery life for music playback is average at 30 hours, but video is limited to a paltry four.

Overall, we should hope that Philips doesn’t see this player as its magnum opus – merely a stage along the way. Its audio output is really very good, but the UI feels old-fashioned, video playback is average and the whole look and feel hasn’t changed significantly since last year. When you think that the SA5825 was hardly cutting-edge, even then, you can’t help thinking that it was time Philips moved things along.


The biggest problem the manufacturer faces is that the market is now even more competitive than it was then, particularly at around £100. For £109 you could have a Samsung YP-P3, while Sony’s superb NWZ-S639F can be had for under £85 – offering double the capacity, no less. Given that the Opus has few, if any, real advantages over these players, it’s hard to give it any serious consideration. It’s a decent enough player, but do you want decent, or do you want style, glamour and all-round excellence? I know which way I’d go.


The Opus delivers excellent audio, but on all other counts it’s slightly lacking. Most of all, it’s low on excitement, and Philips really needs to address this if it’s serious about staying in the PMP game.