The Fidelio Soundcurve is sort of an iPod dock without the dock. Instead it has built-in Wi-Fi and supports Apple’s Airplay technology, allowing you to beam your tracks to it over Wi-Fi either from a computer running iTunes or from iOS devices running version 4.3 and later of the OS.

The Soundcurve is one of the better looking wireless speakers that we’ve come across. It’s not quite up there with the B&W Zeppelin, but it’s still a bit of a stunner and lives up to the curve in its name by having a quite a rounded design. The front surface sweeps back at the sides and top, while the centre of the unit has a letter box cut out that extends all the way to the rear morphing into an aluminium section that doubles up as the stand. The speakers at the front are covered in black cloth that’s soft to the touch, while the rear of the unit has a glossy piano black finish. 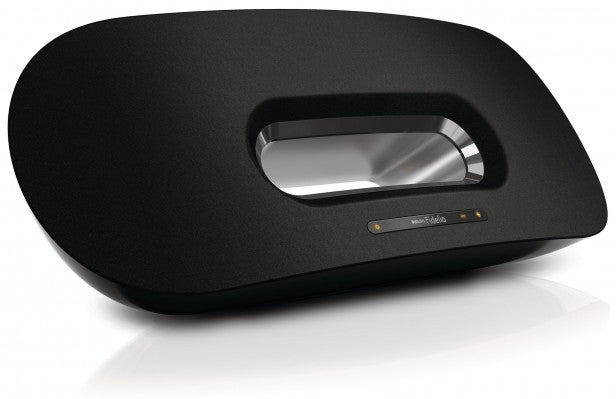 There’s a strip at the front embossed with the Philips logo that houses the power button on one side and the two volume buttons on the other. The unit lacks a display, but instead the power button can flash different colours to give you an indication of what it’s up to.

Turn the Soundcurve around and you’ll find a mini jack plug on the right hand side that lets you hook up non-Airplay compatible kit and feed their sound through the speakers. Next to this lies the power socket. Unfortunately, it uses an external, rather than built-in power supply, which is a tad inelegant. The left hand side of the rear panel is home to a full sized USB socket. This can only be for charging USB devices like your iPhone or iPad – you can’t connect a computer to it and use it as an external device, like you can on some other docks we’ve seen. Finally on the rear you’ll find the Wi-Fi button that’s used to get the Soundcurve onto your home network. There are two ways to do this: you can either set it up using WPS if your router supports it, or you can configure it manually via a web browser.

Using WPS is the most straightforward approach, but unfortunately only more recent routers have this feature (and the standard has recently been shown to have major security flaws, though that’s a topic for another day). If your router does support WPS then all you have to do is turn on the Soundcurve and wait 35 seconds until the green light on the front switches to a slower blinking mode. You then press the WPS button on your router, flip the Soundcurve around and tap the Wi-Fi button on the rear. If everything goes well, the light on front of the Soundcurve should stop flashing and it’ll emit a confirmation tone to signify that it’s now logged on to your network. 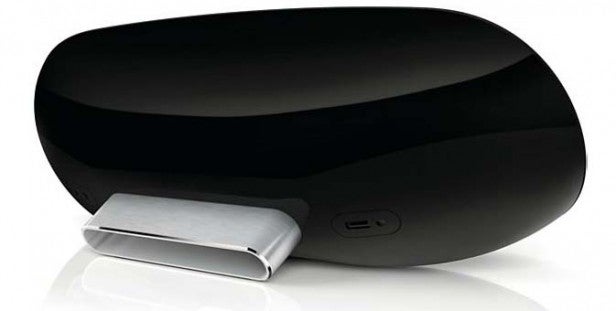 If your router doesn’t support WPS, you’ll have to set up the Soundcurve manually, which is a bit more longwinded. With this method you start by turning on the Soundcurve and then wait 35 seconds for the green light on the front to switch into the slower blinking pattern. Once this happens you press and hold the Wi-Fi button on the back of the Soundcurve for five seconds. This causes the unit to go into a special mode where it sets up its own Wi-Fi network. Then, on your iOS device, you go to the Wi-Fi settings and do a scan for available Wi-Fi networks. Philips Fidelio Airplay should appear in the list. You select this and then start your device’s browser and enter ‘192.168.1.1’ as the web address. This logs you into the Soundcurve’s internal server. Here you can select your home Wi-Fi network from a list and then enter your network’s password. Once you press the Apply button the unit will log onto your home network. It’s not exactly a user friendly way of doing things, but in fairness, it takes longer to describe the process than it does to actually carry it out.

Once the Fidelio SoundCurve DS8800W is on your network it can be found automatically by iTunes and your various iOS devices. Sending music to the speaker is very straight forward. In iTunes you’ll see an extra icon appear on the bottom bar. Clicking on this lets you switch between outputting audio via your computer’s speaker or sending the audio over your Wi-Fi network to the Soundcurve. Alternatively you can choose to have both output at the same time locked in sync.

Similarly, on your iOS device, you’ll notice an additional icon on the bottom bar in the Now Playing screen of the iPod app. Tapping on this lets you switch the music between the device itself and the Soundcurve.

There is a pause of around five seconds between selecting the Soundcurve as your output device and music actually coming out of the speakers, but this is something that affects all Airplay devices, so we can’t moan too much about it.

There’s also a free Philips Fidelio app that you can download from the app store to use with the dock. As well as allowing you to stream your own tunes to the speaker it also supports the Tunein internet radio service that lets you choose from thousands of internet radio stations. The app is handy because it also has a built in graphic equaliser as well as an alarm clock feature. 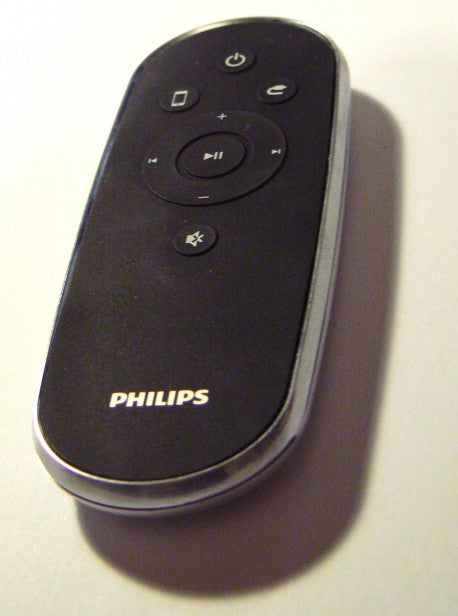 Once you do start your music streaming through the dock, the Soundcurve turns out to be a bit of a revelation. Despite its relatively small size it really does kick out surprisingly deep and fulsome bass. Reggae tunes, such as Thin Man Skank by The Lions, show up its deep bass response nicely, as it does a wonderful job of reproducing the dubby bass lines. Higher frequency sounds also have a crispness and clarity that you don’t always get at this price point. For example, the Reconfigured remix of the Tron Legacy soundtrack had hi-hats and cymbals cutting through the mix so sharply that we feared they’d slice our ears off! 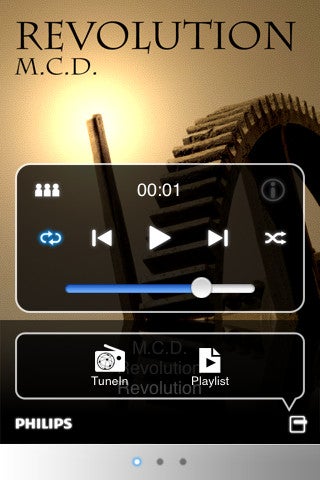 If we have a complaint it’s that the mid-range doesn’t quite have the same weight of the higher and lower frequencies – something that you can notice on the Spanish guitar licks of Rodrigo y Gabriela’s Tamacun. However, it’s certainly not bad in this area, just not quite as forceful as some other, admittedly more expensive, docks we’ve used.

Verdict
The Soundcurve DS8800W isn’t the cheapest Airplay compatible speaker around, but we think its accomplished performance with a range of different music styles, as well as its stylish design, means that it more than justifies its price. If you’re thinking of going the Airplay route you could do a lot worse than opting for this model.