What is the Philips Fidelio SkyQuake?

You’ve got to hand it to Philips: the SkyQuake is probably the best name for a Dolby Atmos soundbar ever. It highlights how the soundbar’s two upwards firing drivers can make sound rain down on you from above, creating a more convincing soundstage. With the addition of 7.1 sound, plus HDMI, Bluetooth and S/PDIF inputs, this would seem to be a soundbar that can do everything.

However, slightly lacklustre audio and unconvincing surround sound let the side down.

Philips has done a great job with the Fidelio SkyQuake. The main soundbar is relatively long (1,058 x 52 x 120mm), although it’s well suited to a 50-inch or larger TV. The one downside is that there’s no IR passthrough, so the soundbar can easily block your remote’s signal to the TV.

Alternatively, the soundbar can be wall mounted, which may make more sense. Since the Dolby Atmos speakers need to fire upwards to bounce sound off of your ceiling, you shouldn’t put the soundbar in an enclosed space, or you won’t get the full effect.

The chunky metal-effect subwoofer is wireless, so you can place it wherever you want. It’s taller than it is wide (240 x 510 x 302mm), making it easy to position out of the way. 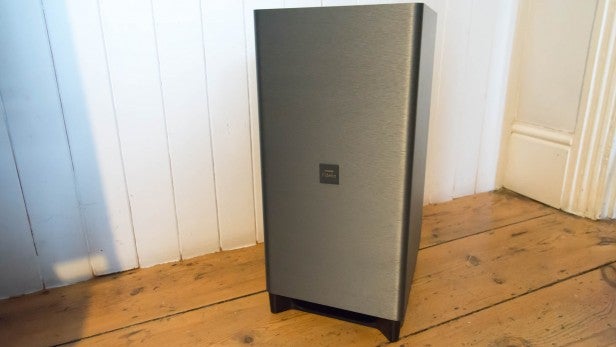 HDMI inputs are a must on a high-end soundbar, required to deliver DTS-HD MA and Dolby TrueHD soundtracks from Blu-ray and UHD Blu-ray discs. Philips has 4K passthrough ports (30fps), but the soundbar doesn’t support HDR. Plus the HDMI output is only HDMI 1.4, which is a little disappointing.

I’d expect a modern soundbar to have full HDMI 2.0a ports. Of course, the HDMI output is ARC-enabled, so that the TV can send sound in the other direction – from its built-in Netflix app, for example. It’s a shame that there are only two HDMI inputs: using Sky Q and a Blu-ray player, for example, means that there’s no room for a games console. 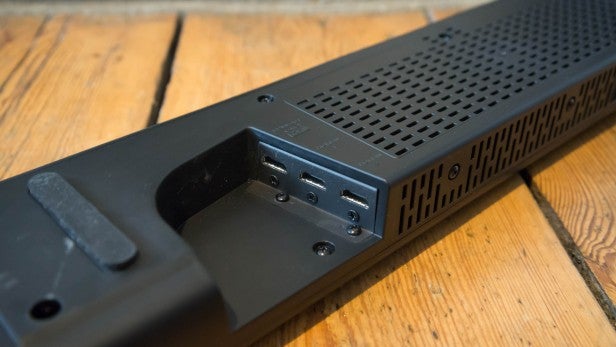 Philips has tucked the HDMI ports into a recess in the soundbar. This makes them fiddly to access compared to those units that put the ports directly on the rear. But there is good reason for Philips’ decision, as wall mounting the soundbar (brackets provided) means that the back of the unit sits flush against the wall. The optical and coaxial S/PDIF inputs are similarly located in a recess for the same reason, although the smaller connector size makes them easier to plug in. 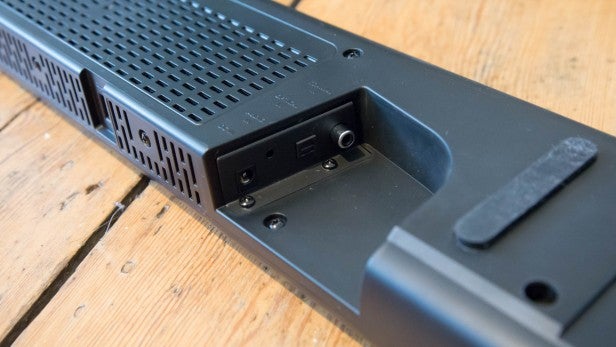 Only the USB port, for playing music directly, sticks straight out of the back to leave enough room for a full-size USB stick. Philips thoughtfully provides a right-angle USB connector, so that when the SkyQuake is mounted on a wall, the USB drives hang straight down. 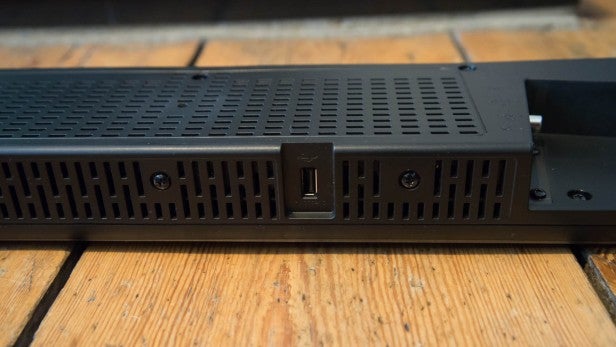 There’s no network connection from this soundbar, which means that you can’t stream music directly to it. A simple remote control is provided in the box, which has all of the features you’d expect, plus shortcut buttons for all of the inputs.

The SkyQuake has 18 drivers for a total of 180W power output, plus a 220W subwoofer for a total output of 440W. It’s a promising combination, and the subwoofer delivers the thump and excitement of explosions and gunshots with ease.

On a first listen, the SkyQuake certainly has the audio capability to handle practically any content. However, the more I listened to it, the more I found it wanting.

Philips’ Ambisound is designed to bring virtual surround sound to your living room, but its audio placement is unconvincing. In comparison, the excellent Yamaha MusicCast YSP-2700, which uses a setup mic to tune its audio for your room, convincingly placed audio all around me. 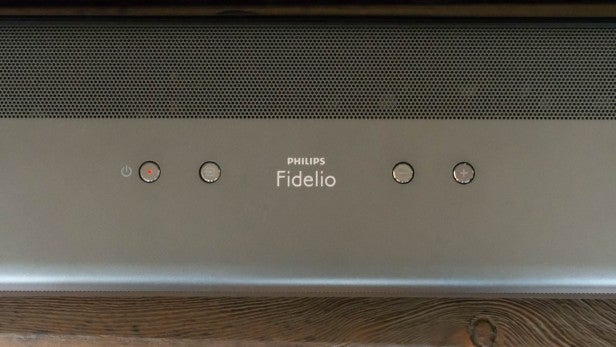 Audio also lacks a little of the polish and impact that I’d expect. Watching the opening of Star Wars: The Force Awakens, which doesn’t have an Atmos soundtrack, the initial battle’s blaster shots lack some of the fizz and sparkle that I’d expect from a soundbar at this price.

Towards the top end, the SkyQuake can get a little harsh, while the mid-range can be a little muddled, making dialogue in some scenes more difficult to hear. Turning on the height speakers using the remote improves the fidelity, but the magic isn’t quite there. That’s not to say that audio isn’t good; just that at this price I don’t expect to hear such flaws. 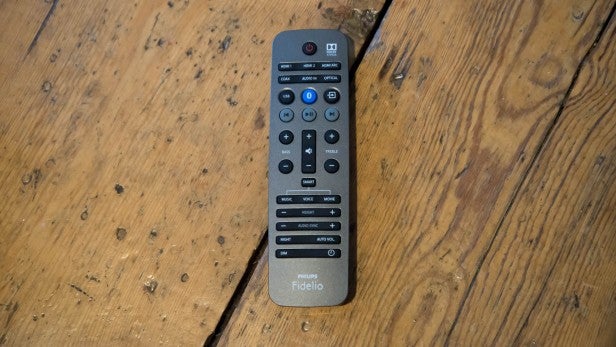 Switching to Game of Thrones and its Dolby Atmos Soundtrack, I watched the “Hard Home” episode. Here, Atmos kicks in, giving a deeper sense of immersion. But, again, positioning is a problem. The height speakers just make it feel as though the sound is all around you, rather than adding any direction. Samsung’s rival HW-K850 delivers a much more impressive and immersive Atmos experience.

Listening to music, via Bluetooth or one of the dedicated audio inputs, is fun and engaging. From the jazz tones of Louis Armstrong’s Mack the Knife, through to Foo Fighters’ Enough Space, I was happily impressed.

The soundbar’s subwoofer adds that thump and excitement, while the 18 drivers layer in detail. Again, the slightly harsh top-end and lack of finesse in the middle can be heard; these aren’t critical faults, but this is an expensive soundbar, and I expect better.

Should I buy the Philips Fidelio SkyQuake?

In isolation, the Philips Fidelio SkyQuake is a fun and engaging soundbar that adds detail and oomph to movie soundtracks. But, the soundbar competition is tough and any flaws, no matter how minor, really stick out at this price.

The lack of positional audio and slightly harsh top-end detract, especially when the Samsung HW-K850 sounds better and costs the same. Spend more and you can get the superior Samsung HW-K950, which has dedicated rear speakers for a properly immersive experience.

If Dolby Atmos isn’t that important to you, then you can get the excellent Yamaha MusicCast YSP-2700 for even less. Its smart soundbeam technology accurately fakes having extra speakers, giving a much more immersive sound field, and it has the excellent MusicCast multi-room audio built-in, too.

A neat soundbar that delivers better audio than your TV, but the sound is a little lacking at this price and the absence of HDMI 2.0 ports is disappointing.