The Philips Fidelio DS7700 is here to bridge the gap between electronics and the outside world. It won’t be too happy if it starts raining, but this high-quality iPod/iPhone speaker dock is just dying to provide you with tunes during days out in the park and barbecues in the garden. Let’s see if it has the sound quality to back up its £179.99 price tag.

Philips’s Fidelio range is home to more than a dozen models, but the DS7700 is perhaps the most feature-packed of them all. It functions perfectly well as a standard “at-home” dock but also offers Bluetooth wireless audio streaming and a built-in battery that’ll provide up to 10 hours of playback away from the power plug.

Although bigger and more expensive than the vast majority of travel speakers, the Philips DS770 is prepared for a life away from the house.

Conscious that a coated metal speaker grille won’t fare too well with too many knocks and scrapes, the DS770 has a metal-covered plastic plate that fits over its front when the unit’s not in use. This is held in place with magnets, leaving no clips or clasps to break off. 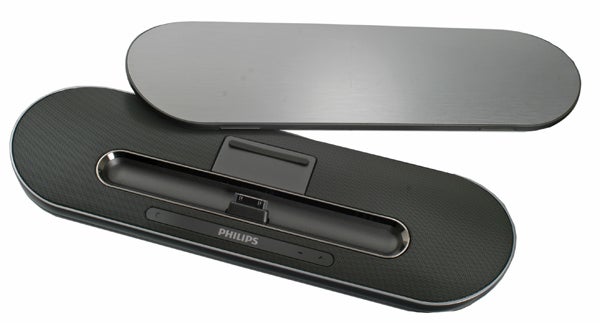 Like the curved back of the dock, this front panel has a shiny brushed metal-style finish. It looks swish, but makes us wish that Philips had included a travel bag here. A days rummaging around in a rucksack and it’s sure to pick up a few scratches that will spoil the look. When many other portable speakers include a cloth case, this feels like an oversight. Also, while making the front cover fully detachable enables the DS7700 to look the part as a kitchen or lounge sound system, it also means it’s all-too easy to lose the front plate, particularly as the magnetic clasps aren’t all that strong.

These issues aside, the dock is well suited to its task as a home and away iPhone dock. A pull-out flap on the back acts as a stand, and also causes the iOS device backrest to pop out on the front. Like all the current Fidelio docks, the DS7700 uses a raised dock socket, eradicating the need for any inserts for specific models – a major plus if you own several iOS devices. It’ll handle iPads too.

The only controls on the dock are the volume and Bluetooth pairing buttons on its front and the power switch up top. This dock is designed for iPhones, iPod Touches and iPads primarily, but will pair with other Bluetooth-enabled devices too – including Android phones – with no problems. There’s also a 3.5mm jack on the back to connect other music sources. 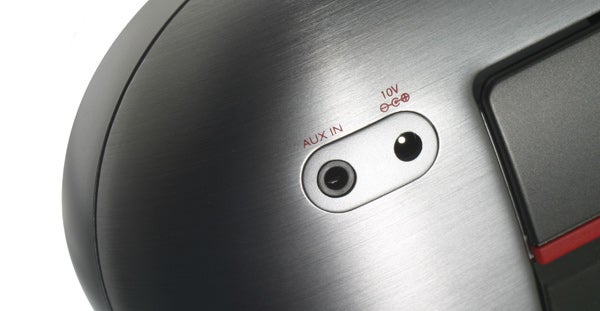 Connectivity-wise it’s pretty flexible, but the rechargeable battery is not removable. There are no visible screws either, so the ambitious among you will have to smash the DS7700 to bits to get to its internals – not something we’d recommend.

When the Philips DS7700 is paired with an iPod Touch or iPhone over Bluetooth, the free Fidelio iOS app can be used to control the dock remotely. Within this app, you can see the battery charge level and choose from between five equalisation settings – Flat, Pop, Rock, Jazz and Classic. You also have control over the DBB (Dynamic Bass Boost), and naturally any sound from your device, including games, is transferred over to the dock’s speakers.

Under the speaker grille is a set of neodymium drivers, powered by a 14W RMS amplifier. This is slightly more power than the cheaper DS7600 or DS7550, but sound quality is in a similar league.

Still, that’s not bad going. At low and medium volume, the Philips Fidelio excels, providing a rich and detailed sound that beats rivals like the Sony RDP-M15iP in terms of clarity, musicality and dynamism. The dynamic bass boost works its wonders well, providing the dock with a full sound even at low volume.

Unlike its bigger Fidelio brothers, the DS9 and DS9000, it will struggle to fill large rooms, and shows signs of struggle at high volume. That’s pretty loud, mind. For civilized gatherings outside or inside, the DS7700 is a godsend. 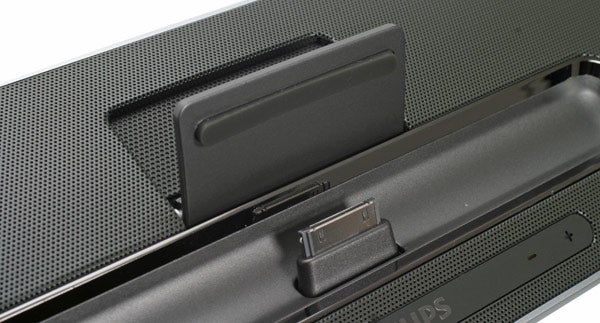 It’s something of an aberration in the Fidelio series though, which succeeds in our minds through executing its docks simply, with style and great sound quality across the board. While the design is good-looking here, the addition of the Bluetooth feature and rechargeable battery has hiked the price up into tricky territory. £180 is a lot to pay for an occasional-use dock and the D7700 doesn’t quite have the scale of sound to use as your main living room music source.

We’re not convinced that the dock really needs Bluetooth either, given that it has a 3.5mm aux input and shouldn’t be bought by any non iOS device users. If Philips had slashed £40 off the price and yanked the Bluetooth, we’d be a lot happier. 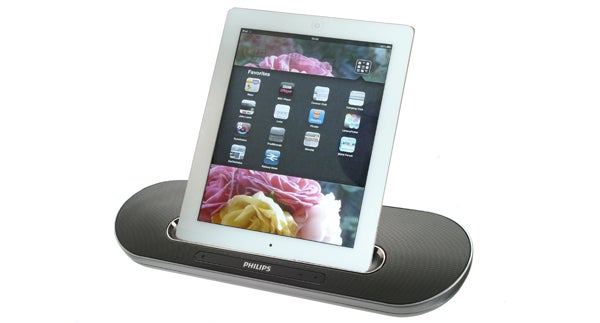 As it stands, the DS7700 is 70 per cent more expensive than the DS7510 and – more crucially – Logitech’s lauded 715i, available for £99.99, which offers an 8hr battery life and great sound quality. The Philips does have its advantages, including a more attractive design and increased portability, but for once the Fidelio range isn’t quite looking like the best-value option around.

Once again, the Fidelio range has come up with a great-sounding, good-looking iPhone dock. With Bluetooth and a rechargeable battery on-board, this is also one of the most flexible products in the whole range. However, retailing for £180 and compromised sonically by its size, there are better-value options out there.