You may recall that we rather liked Philips’ DS9000 speaker dock. Our interest was piqued, therefore, when we heard that a smaller, cheaper derivative was on the way. It’s called the DS3000, and at less than £55 it is, indeed, much cheaper than the DS9000; in fact, it’s arguably the better buy.


Not that we’re suggesting the DS9000 isn’t worthy of its £400-odd asking price, but for many people that’s simply too much to countenance. The DS3000, conversely, is priced at a much more attractive level, but without much sign of compromise. 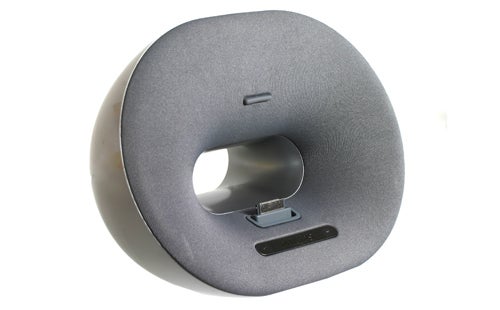 Take the outer design, for example, which we thing is fairly attractive. The warped-toroid shape is similar to the DS9000, albeit in more compact dimensions – 210mm x 150mm x 135mm to be precise. From the dock to the top of the speaker is about the height of an iPod touch (one of these will just peak over the top), so the DS3000 isn’t particularly imposing. The device is available in silver or black, and the we’d pick the latter as the so-called silver is more of a muted grey to out eyes, which while not unattractive isn’t the prettiest shade going.

An interesting design feature, which we didn’t expect to see, is the presence of a battery compartment on the bottom of the DS3000. This will hold four AA batteries, which should provide in the region of eight hours of playback. It’s a smart edition, as the compact size of the DS3000 makes it suited to be ported about – the hole in the centre even makes a half-facsimile of a decent carrying handle.


We like the volume controls on the front of the DS3000. Whether that’s because of their TR-livery orange backlighting or the reassuringly mechanical click they exhibit on use we’ll leave you to debate. With so many other manufacturers resorting to touch-sensitive controls, which invariably fail to work properly, we think it’s good that Philips still seems to understand the benefits of ‘real’ switches and toggles. 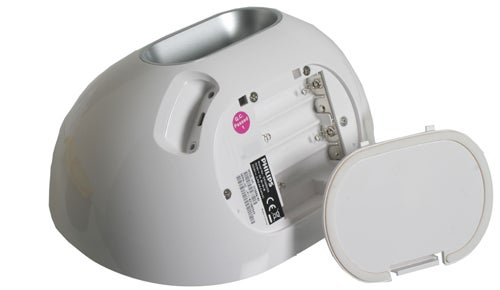 Aside from batteries, the DS3000 can also be powered with a traditional AC adaptor. Next to the power port is an aux-in for use with a non-iPod source device. We were disappointed to learn that the USB port on the DS3000 doesn’t let it work as a USB speaker when connected to a computer. However, it does let the DS3000 function as an iPod dock, so you can sync new music using the DS3000. We tried out a range of iPhones and iPods and all of them worked flawlessly.

The dock connector on the DS3000 is worthy of praise, too. The spring mechanism means that there are no rubbish interchangeable dock inserts to mess about with; instead you just slot your iPod on top of the dock and it will hold it securely in place. We had a little trouble getting a current-generation iPod touch to slot in, but that seemed to be a by product of the design of the dock connector on the iPod rather than the DS3000.


The most annoying thing about the DS3000 is that it will prompt you to install the Philips Fidelio+ iPhone app every time you connect one (or an iPod touch). Although this application is free, it doesn’t really offer anything worth the effort of installing it – which you will, if only to avoid the nagging. This offers an alarm with either a few sound effects or selected music from your library and pretty much nothing else. 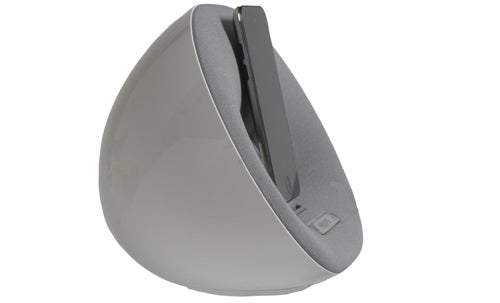 The 8W power rating of the DS3000 proves deceptive, as even at low volumes (we’re talking under a quarter on an iPod touch scale) the output has a good deal of punch and vigour to it. Turned up all the way, the output gets pretty distorted, as the small drivers can’t really cope with such loudness, but the DS3000 maintains its poise even at volume levels that might have your neighbours demanding you turn down the racket.


Importantly, the output is able to be this loud at the expense of quality. Unsurprisingly we’re not talking Bowers & Wilkins Zeppelin, or even DS9000, levels of fidelity here, but for £52 it’s better than we expected. The punchiness of the output definitely works best with certain genres of music. 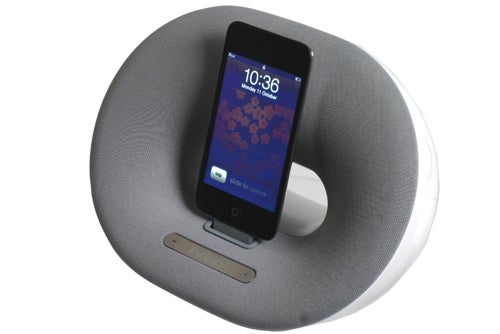 Music from the likes of The Veronicas work well, with a real sense of energy. There’s enough detail to reproduce the more technical works of Biffy Clyro well, too, with background tones merging well with vocals and lead instrumentation to develop a wider and more involving soundstage than we expected of such a small speaker dock.


It’s not a flawless bill of health, though. Put on something a little less heavy, say the Shins or the Beta Band and you aren’t going to be blown away by the detail, clarity or poise on display – because there isn’t as much as we want. But then, we’re talking relative to speaker systems costing several times the money the DS3000 does, so it’s not so much a criticism as an observation. 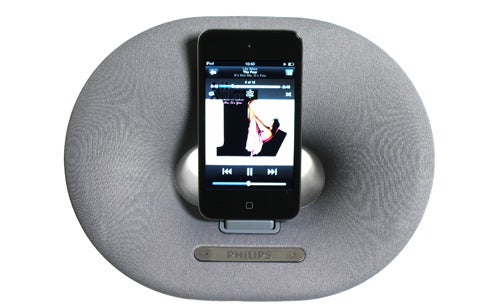 As a fairer benchmark, we can safely say that the DS3000 sounds tangibly better than the almost four times more expensive Sony RDP-X80iP. For the money, the DS3000 really is an excellent sounding iPod speaker dock.


It might not have the size or distinctive looks of the larger, more expensive DS9000, but what the DS3000 lacks in presence it makes up for in value. It offers excellent sound quality for its asking price, has a neat docking mechanism and can even be battery-powered, and we can’t ask for more than that.