Last year, the Philips Fidelio range came out with some real corkers. The Fidelio DS9000 and DS9 were two of our favourite docks, and the more recent Fidelio L1 headphones are a must-audition if you have two hundred or so quid to spend. However, a whole new line has now been unveiled – the Fidelio AW speakers are wireless boxes designed for use with primarily iPhones and Android devices. And right up top sits the Philips Fidelio AW9000, a pair of large bookshelf-sized speakers that will sell for £500.

These are wireless speakers, but they do not use the popular AirPlay standard. This is so that devices other than Apple’s can get in on the action. The Philips Fidelio AW9000 speakers use the DLNA streaming standard, which works in a pretty similar fashion, all told.

Design
But first, the hardware. These speakers are roughly the height of Hi-Fi bookshelf units, but with significantly less depth to the cabinets. They’re not exactly square, either – more diamond-shaped, and a single flat side is not meant to end up facing the listener. This is because of the particular arrangement of the d’appolito speaker array. 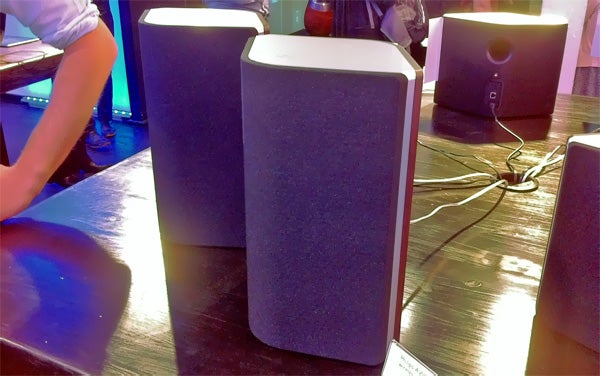 A d’appolito arrangement is where a tweeter is hemmed-in above and below by larger mid-range drivers. In the Philips Fidelio AW9000, each of the mid-range drivers sits on one of the angled sides, while the tweeter sits in the middle, firing straight forward. However, there’s a non-removable grill on the front that stops this arrangement from being too obvious, visually.

The driver arrangement makes more sense in the smaller AW-series speakers, which have just a single housing – firing off at an angle increases sound dispersion, mitigating for a one-box design – but it has its benefits here too. It lets the Fidelio AW9000 sit happily in corners and makes the sound less directional, and hence less picky about placement. 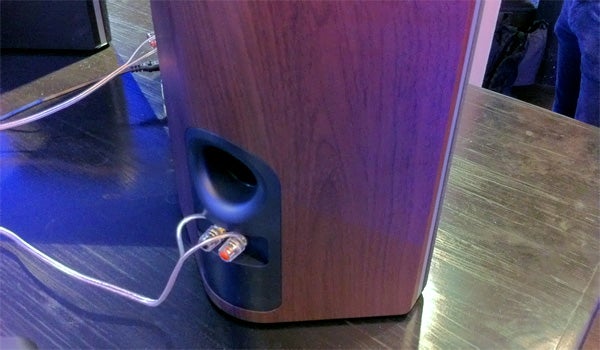 Shoved against a wall, you’ll mostly just see the off-black grills and a hint of the slightly-sloped brushed metal-finish top. The backsides are pretty attractive too, though, topped with wood veneer. It should be noted that with a rear ported design, jamming them fully into a corner may make the sound boomy. 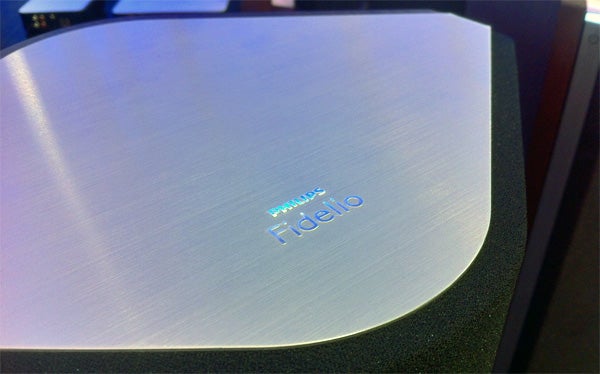 Connectivity
Although sold primarily as wireless speakers, the Philips Fidelio AW9000 also offer a good spread of wired connections. The speaker terminals are of the standard screw – rather than springclip – type and the back panel to one of the speakers houses the quartet of wired inputs. These connections sit on just the one speaker because one box is the master, containing the class-D digital amplifier, and the other a slave – hence the need for speaker connections. 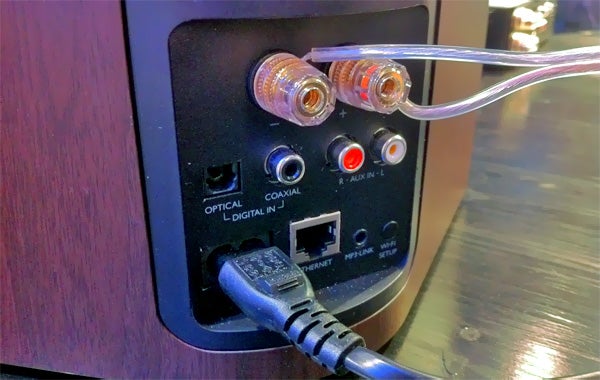 There are coaxial and optical digital sockets, a stereo phono pair and a 3.5mm auxiliary jack input. If you’re wireless internet is unreliable, an Ethernet port is ready and waiting too.

In use
Unlike many wireless speakers, the Philips Fidelio AW9000 feature an array of buttons discreetly lined-up down one side. They switch between sources and control volume.

However, if you’re using these speakers as-intended, you’ll spend most time controlling them using the Airstudio app. Made by Philips, it lets you control several boxes from the AW series at once, as well as choosing what tunes you want to play.

Using the DLNA standard makes them surprisingly versatile. In the connections part of the app, music sources show up at the bottom of the screen, and connected speakers up top. Just a line from one to the other to get music piped-over to the right place. In this respect, the AW9000 is a pretty direct rival to the Play:3 and Play:5 streaming speakers from Sonos. 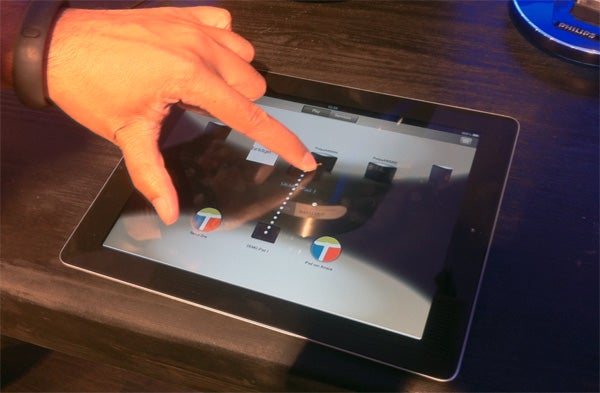 Although app is a huge improvement over the shonky Fidelio app we’ve used reviews other products in the series, it did demonstrate a few teething problems. And as thanks to the way these speakers work, we doubt whether you’ll be able to use them outside of this bespoke app. We’ll check this out in the full review.

Sound quality
The noisy environs of Philips’s demo were not a great place to check out sound quality, but the Philips Fidelio AW9000 clearly provide sound that’s not compromised by form in the way many compact iPod docks are. Sounding beefy and with enough volume to fill most lounges, they seem a solid alternative to docks like the B&W Zeppelin Air – especially if you’re out for something to melt into the room rather than become its centre point.

However, we’ll be back with our full verdict on sound quality in our review, coming soon.