iPhone users wanting accessories are spoilt for choice. There are
thousands of the things, from speaker docks to miniature arcade
cabinets. Android users aren’t so lucky, in spite of the tens of
millions of Android owners, many with wallets brimming full of notes
willing to be spent on such stuff. Part of the problem is how different
all the phones are, but the Philip Fidelio AS851 speaker dock attempts
to get around this. It’s a dock designed for Android phones, with a
flexible charge stand that can cope wherever your microUSB may be.

Android
phones have charging slots in all sorts of places, but they are at
least almost all microUSB. It’s this that makes the Fidelio AS851 a
viable product, rather than a solution to a problem that doesn’t exist.
However, its approach is rather different to most of the Fidelio range’s
iOS docks, such as the excellent DS9. 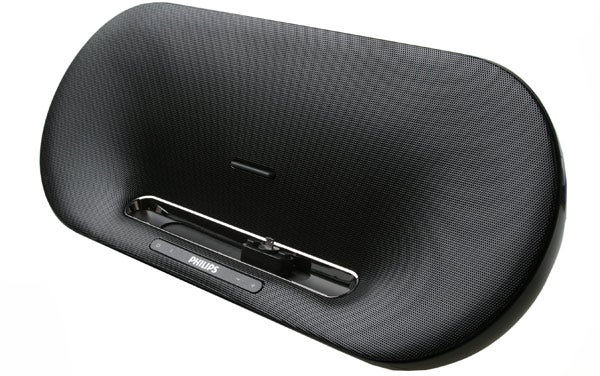 Sound
isn’t transmitted from your Android phone through the microUSB slot –
the socket on the AS851 is used just for charging. Music is instead
transmitted wirelessly over Bluetooth, as it is in the series sibling DS7700
– which is primarily intended for use with iOS devices. There have been
plenty of Bluetooth speakers in the past, including cracking ones like
the Creative D200, but the importance of this new Fidelio model is that its hardware is fully tailored for Android.

But
how do you cater for a microUSB slot that might be on a phone’s bottom,
its side, or just about anywhere? While the socket of the AS851 appears
to be arranged much like the 30-pin connector of an iPhone dock, it can
be moved. It sits on a thick rubber band – a conveyor belt of sorts –
that can be pulled to the left or right. And the microUSB connector can
be turned around by 180 degrees, to avoid you having to leave the phone
resting to one side or, much worse, with the screen facing the speaker
grill.

It’s a decent stab at Android docking, but it’s a pity there’s no
way to lock it in place once you’ve found your optimum position. There’s
a little bit of give to the mechanism thanks to the use of rubber,
making the AS851 slightly less well-built than the closest iOS
alternative from Philips, the DS8550, but ultimately given the need for
flexibility it’s easy to forgive. Crucially, it works and every Android
phone we tested was accommodated with ease. Philips doesn’t recommend
shoving an Android tablet on there, but as long as the socket is
centrally placed on one of the sides, it shouldn’t create any problems.

Top
models in the Fidelio range are constructed using top-quality
materials, like real wood and brushed metal. Resting somewhat lower down
the scale, the AS851 isn’t quite so lucky. The front is dominated by a
stylishly-curved grill made of coated metal. It doesn’t flex and feels
very strong, winning the dock back some build quality points. However,
the back of the dock is rounded glossy black plastic – nothing too fancy
and unlikely to impress many onlookers, but in most setups this part of
the dock won’t be fully visible.

Also
hidden from view, the Philips AS851 has a USB port and an auxiliary
3.5mm input, on its back in-between the dual bass ports. The USB socket
doesn’t let you plug in a memory stick to play back your MP3s, but it
will supply power for another device – perhaps something not served by
the front microUSB. Unlike some smaller members of the Fidelio family,
there’s no battery compartment or built-in lithium power supply. You’re
tied to the AC adaptor here. It’s no surprise given how the dock sounds,
though – more on that later.

As with any wireless streaming solution, there is some degree of setup involved with the Philips Fidelio AS851. However, it’s all made fairly simple by the Fidelio Android app.

This has been available for a while, but has now been updated to support easy Bluetooth synchronisation with devices like the dock. From within the app’s main menu, you simply select the dock within the “Speaker Connection” submenu, and the two will hook up. The app is very aggressive about trying to maintain a connection, and will try to resync whenever possible. This will dig into your Android smartphone’s battery a bit, but is a bonus in terms of making the link between phone and dock appear seamless. 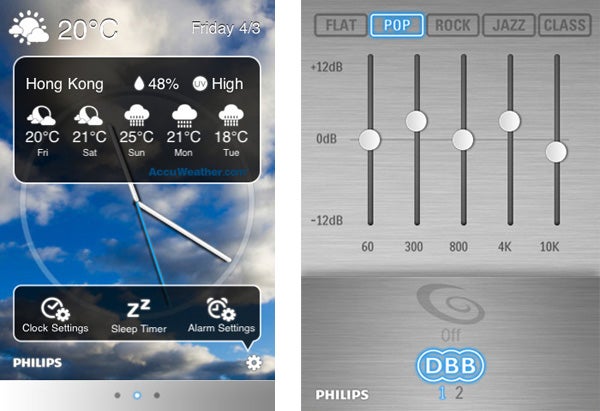 The app isn’t simply a means to connect, though. It’s also a full music interface. It hooks into the TuneinRadio and Songbird apps to give you access to your music library and thousands of internet radio stations. There’s a clock, and weather report, too.

As neat an idea as a fully-featured hub may be, the app interface needs work. It isn’t as smooth or slick as the TuneinRadio and Songbird apps proper, and we quickly turned to using the Fidelio app as little more than a way to perform the Bluetooth sync, ditching it afterwards. There’s no big downside to playing this way, as all audio output from the phone is sent over to the AS851 over AD2P – so you can use it to output sound from games and videos as well as music apps.

If you dislike the way the Fidelio app keeps on draining your Android phone’s resources, you can dump it altogether and sync up manually through the handset’s Settings menu. There’s nothing intrinsically Android-biased about the AD2P Bluetooth streaming working at AS851’s core, and you can stream sound from a great many Bluetooth-enabled devices here, including an Apple iPad. It once again highlights that the “made for Android” tag of the dock is all about the charge dock rather than something deeper-rooted in the way it produces sound.

Other than neat styling, best demonstrated by the DS9000 and DS9, we appreciate the Fidelio range primarily for its approach to sound. It’s an approach clearly audible in the AS851.

What Fidelio docks tend to do better than almost any others is to offer a sound signature that balances the demand for bass, power and scale with detail and texture. The AS851 sounds eminently tasteful, but exciting at the same time. 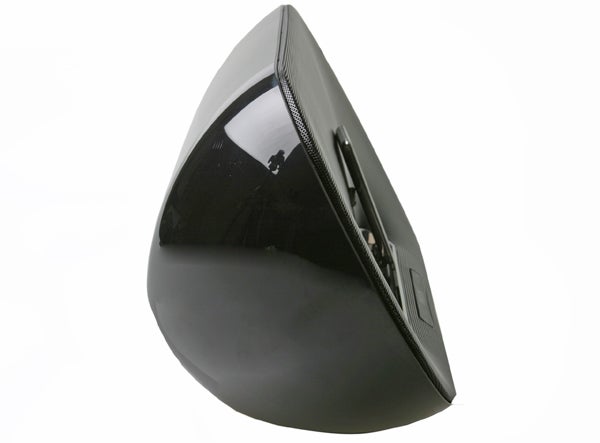 Audio products at this level will often be cast as something that’s “good for bass” or “good for Classical music” – also a kinder way to say it’s not good for bass. Taking its diminutive size into account, we found the Philips Fidelio AS851 a versatile audio buddy. It has the low-end clout to make rock and dance music sound good without letting it steal the show in music that demands more finesse. As is common to smaller docks like this, the mid-range is a weak point, but among its portable peers the AS851 is a strong contender.

There is a drawback in the way it receives music, though. It uses A2DP Bluetooth, a “lossy” transmission standard for mono and stereo audio, where others use near-lossless apt-X or other less problematic Bluetooth types. However, we didn’t notice any distinct loss of quality in normal listening – when you’re dealing with small drivers in docks like these, careful tuning will make a greater difference. And we’re impressed with the Philips Fidelio AS851’s audio signature.

However, it has a price problem. Selling for just under £200, it’s creeping up close to the top dog docks – the Fidelio DS9 is available for under £250 and offers much better build and sound quality comparable with the top-end DS9010 model. Perhaps a more prescient comparison is the Creative ZiiSound D5 Bluetooth dock, which now costs as little as £20 more.

It looks better, sounds bigger, offers the superior apt-X Bluetooth codec and comes with a neat dongle to stream from an iOS device. It doesn’t have the Android optimisation of the Philips Fidelio AS851, but the comparison has convinced us that it’s not “all that” anyway – all the really important stuff is in no way specific to this dock. Talking to Philips, we were told that there’s a chance this new Android range could make use of MHL to pull the audio stream directly from an Android phone’s microUSB socket – MHL is a new standard that lets a phone output HD video and surround sound very simply. Perhaps this could shunt the potential of Android docking up a level, but as is we’re not quite convinced this is the Android missing accessory link.

Verdict
It’s about time Android got some of the accessory love iPhone owners have enjoyed for years. This Fidelio dock for Android owners will charge your smartphone while playing its audio output over Bluetooth. Thanks to its flexible dock, it’ll take phones of all designs too. However, it’s not quite the best Bluetooth dock you can get for around £200 and it doesn’t offer the desirable design of the Fidelio range’s bigger, pricier models.