Whatever else you might think about Philips, you certainly can’t deny that the brand is a genuine innovator. This has always been true to some extent, but the Philips R&D department seems to have been in absolute overdrive this year, hitting us over recent months with such goodies as new, extremely powerful image processing, a debut LED backlit TV, and most recently a much-refined version of its Aurea Light Frame technology.


But you know, for all the cleverness, quality and sheer flamboyance of some of these earlier TVs, for me the new ‘Essence’ 42PES0001 is the brand’s most successful innovation to date. Why? Because it combines elegance with cold but brilliant practicality so effortlessly that it has to be seen to be believed.


The key to what I love about this TV is that every single inch of it has been designed to make it the ultimate ‘hang on the wall’ TV. This might seem rather odd when I tell you that the TV actually ships fastened to a neat desktop stand, but believe me: the Essence takes the basic ‘hang it high’ concept and, in increasingly typical Philips fashion, ‘turns it up to 11′. 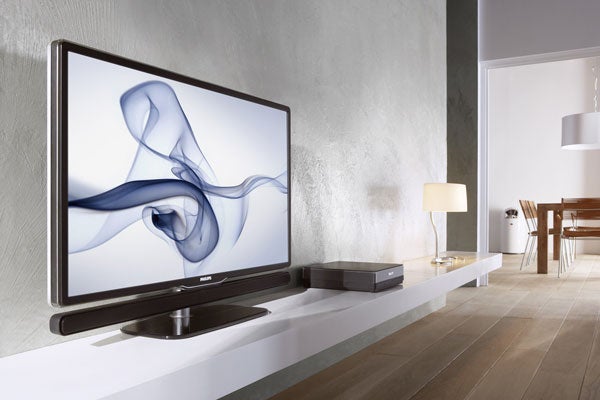 The ‘price’ for this is the fact that the screen doesn’t actually have any tuners built into it. Instead, the usual digital and analogue tuners are housed in an external media receiver box, supplied with the screen, along with all of the TV’s connections.


However, far from being a disadvantage of the 42PES0001, I’d argue that this external receiver box is actually a good thing. For starters, if you’re serious enough about wall-hanging your TV to have splashed out the best part of two grand on an Essence, then the last thing you’ll want is to have to put up with reams of cables sticking out of it. It’s much tidier to have an external connections box, with just a single cable running between it and the screen.


In fact, in this respect the Essence actually outdoes Pioneer’s KRP-500A plasma TV, since while the Pioneer system required separate power cables for its screen and media box, this Philips puts power, video and audio through from the media receiver to the screen using just one ‘umbilical cord’.

It does no harm to the external media receiver’s case, either, that it’s very nicely designed, featuring a glossy dark finish that looks almost as futuristic as the screen. Naturally the glossy finish of the receiver also matches the rich black finish of the extraordinary thin screen bezel – a bezel which extends barely half an inch in width around the entire screen; a space-saving design flourish reminiscent of Toshiba’s Picture Frame LCD models.


So thin is the TV’s bezel, in fact, that there’s only just room for a tiny Philips logo along the bottom edge, and a ‘pin-hole’ power light. 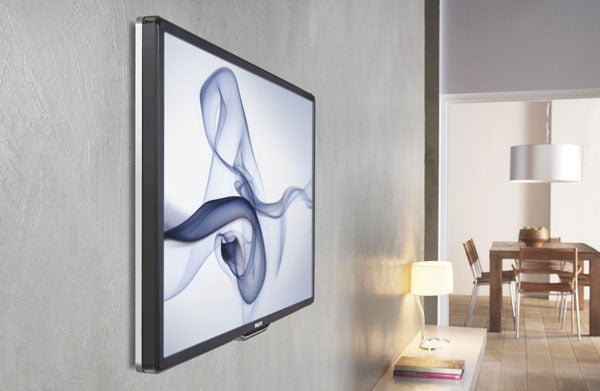 Speakers are always a thorny issue with extremely thin TVs, especially if you’ve got an eye on wall mounting. Yet here again Philips has come up with a remarkably elegant solution in the form of a really smartly designed speaker bar that can – but only if you wish to use it rather than a separate audio system – be attached to the TV’s bottom edge using a simple two-screw mount. What’s more, this speaker bar ‘connects’ to the audio output of the TV via a little row of touch-sensitive pins built into the mounting bracket, meaning there’s no need to mess about with anything so last year as audio cabling. Nifty.


The Essence has already gone further than the vast majority of flat TVs to make wall hanging it an absolute doddle. But we’ve still not got to what’s arguably its most inspired touch: its wall bracket. What makes this so special – aside from the fact that it’s included with the package rather than an optional extra! – is the fact that it’s curved, and allows the TV to move around that curve until you want to lock it into place. This makes it infinitely easier to get the TV sitting level on your wall, since if you don’t quite drill the mounting holes completely level, you can just slide the TV around the bracket curve until you’ve compensated for your drilling error. As a man who is to DIY what Barry White was to marathon running, there really is no overstating just how brilliant I find this wall bracket to be. 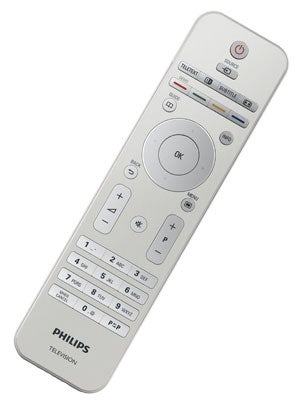 At which point I guess I’d probably introduce a bit of bad news, just in case you think my excitement is beginning to get the better of me. For gorgeous, slim and practical though the Essence undoubtedly is, it also resolutely fails to ‘light up’ in the way practically all other mid to high-end Philips TVs do these days. This is because the slenderness of the TV frame has made it impossible for Philips to squeeze in its eye-catching Ambilight technology, where relaxing, immersive pools of coloured light spill out of the TV’s rear and sides.


This really is a pity, for Ambilight generally works best in a wall-hung environment. Plus the extreme slenderness of the Essence’s frame would have meant there was less of a physical ‘barrier’ between the picture and the Ambilight ‘pools’. But when push comes to shove, if losing Ambilight is the price that has to be paid for the Essence’s stunning wall-hanging practicality, so be it.

Returning to the Media receiver, it occurs to me that I haven’t actually gone into its connections yet. So here goes: it includes three HDMIs, a USB port, a DLNA-certified Ethernet port for PC networking, component and VGA PC inputs, and a digital audio output – as well as the usual SCARTs and so on.


In an ideal world a fourth HDMI might have been nice, but then it’s hard to be churlish about this when the box manages to provide such an unusual degree of multimedia flexibility. Its USB and Ethernet ports can, after all, handle MP3, .alb (slideshow), MPEG1 and MPEG2 files as well as the usual JPEGs, while the Ethernet port supports a huge list of media server applications, including Windows Media Player 11, PacketVideo Twonky Media 4.4.2, and Nero 8. 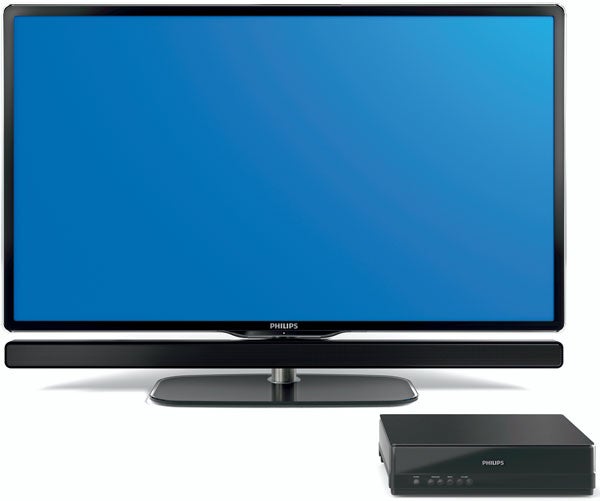 The Essence’s media receiver has some pretty important stuff going on ‘under the hood’, too. For tucked away in there is the chipset of Philips’ latest Perfect Pixel HD Engine video processor. We won’t go into this in great detail here, as we’ve already covered it extensively in other recent Philips reviews. But essentially it’s designed to improve colour, contrast, detail levels, motion reproduction and video noise levels. The same can be said, of course, of countless other video processing engines from rival manufacturers. But we’ve consistently found the Philips engine to be considerably more aggressive and powerful than any of its rivals.


Finally dragging myself away from merely admiring the Essence’s outstandingly practical but also beautiful design, really the only thing I need to say about the pictures produced by its screen is that they’re not negatively affected by the screen’s super-slim status in the slightest. Which means that the Essence’s pictures are among the very finest anywhere in the flat TV world.


I refer you to recent reviews of the Philips Aurea II and, especially, the 42PFL9703 for a full description of just how the Essence’s pictures break down. But in summary, if you love extraordinarily dynamic but authentic colours, incredibly acute fine detailing and sharpness, and some of the best black levels in the LCD world (outside of the LED-backlit fraternity, at any rate), the Essence will do nicely.

Obviously the usual Philips rider applies here. Namely that if you want to get the very best out of the Essence, you’ll have to spend way more time tinkering with the multitude of settings it provides than you’d have to with a ‘normal’ TV. Failure to do this – and to gain at least a basic understanding of what all the picture options actually do – can lead to problems such as overt glitching over fast motion, overstressed edges, and even a few overcooked colours.


Particularly controversial is the HD Natural Motion processing, which reproduces motion with a mesmerising fluidity, but also tends to throw up some pretty aggressive glitches, even on its minimum setting. Some people can’t tolerate this feature at all, though I personally think that it’s fine with normal TV shows, only becoming problematic with sport, HD movies and console games.


But in any case, the key point about this feature – and one that many other reviewers seem to forget – is that you can deactivate it entirely if you don’t like it. And even if you do, the increase in judder that results only marginally taints what are still absolutely stellar LCD pictures. 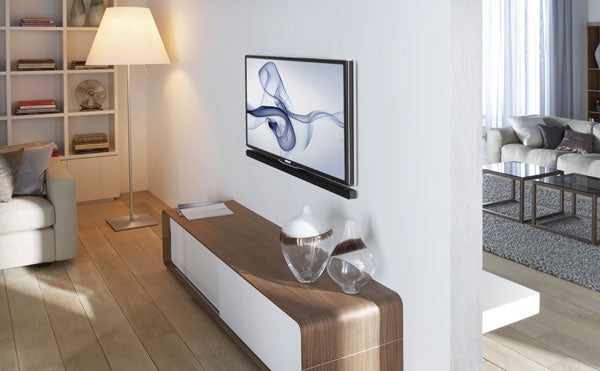 We guess you might argue that it’s not great to pay for a high-spec feature like HD Natural Motion that you don’t ultimately use. But while the Essence is certainly very expensive for a 42in LCD TV, for me the unique nature of its proposition and the extent of its innovation just about justifies the cost, with or without HD Natural Motion.


Turning finally to the speaker bar supplied with the 42PES0001, it’s good without quite being brilliant. On the upside, it’s capable of good volume levels, and the soundstage remains startlingly open and detailed even when pushed really loud. On the downside, there’s not quite enough bass around to provide a truly satisfying counterpoint to the treble enthusiasm. But let’s be fair here; in the context of the audio produced by many normal flat TVs, never mind one just 40mm or so thick, the Essence’s efforts are actually pretty good.


On paper, I guess that the Essence’s claim to fame as the easiest TV to hang on the wall ever probably sounds a bit dull compared with stuff like LED backlighting and the Aurea Light Frame. But in reality, the extremes to which Philips has taken its wall-hanging goals with the Essence while also keeping a firm grip on aesthetic beauty AND performance standards has resulted in a product which, dare I say it, seems at least a little touched by genius.