These days it’s not enough for digital recorders to simply record TV. The latest hard-disk equipped models can perform all sorts of tricks, including digital networking, multimedia playback and hi-def upscaling, making them behave more like PCs than VCRs. In fact, this new DVD/HDD combi recorder from Philips (the first from its 2008 range) is being billed as an ‘AV centre in disguise’ due to its ability to store music, movies and photos on its 250GB hard-disk drive.


But despite this bonus functionality, let’s not forget that the DVDR5570’s primary function is to record TV programmes, and on that score it’s exceptionally well equipped. There’s are built-in Freeview tuner (alongside an analogue one), which lets you record digital TV programmes directly onto the hard-disk, while the built-in Guide Plus EPG lets you browse the schedules and set timer recordings up to eight days in advance. It’s not Freeview Playback compliant though, which means no Series Recording.

When it comes to timeshifting tricks, nobody does it better than Philips. The reason is the Time Shift Buffer, an area of the hard-disk used to continually record whatever you’ve been watching. It holds up to six hours of TV programmes, and an easy to use on screen display enables you to skip back through the memory and retrospectively record a programme. It won’t automatically detect the start and stop points of a programme though so you have to set them manually. The TSB also lets you pause and rewind live TV, plus you can play something back and record simultaneously.


As well as hard-disk recording, the DVDR5570H can also record onto DVD, and accepts a list of formats that comprises DVD-RW/-R, DVD+RW/+R and dual-layer DVD-R and DVD+R discs. You can’t record directly onto DVD (you have to record onto the HDD first and copy to DVD) but at least you get the chance to tidy up your recordings before archiving them.


When recording onto the hard-disk, there are seven recording modes to choose from, which alter the picture quality to increase the amount of recording time available. They range from the best-quality HQ mode, which lets you fit up to 40 hours on the hard disk or one hour on a single layer DVD, to the lowest quality SEP mode (300 hours HDD, eight hours DVD).


Editing is fairly basic despite the presence of a hard-disk. Using an on screen video bar, you can play back a recording and add/delete chapter points, hide the scenes you don’t want to be played back, or divide a recording into two parts. A similar range of functions is also available for recordable DVDs. While these will be sufficient for most users, the lack of non-linear ‘playlist’ editing is a shame and the video editing process using the remote’s coloured keys is cumbersome.

DivX, MP3, WMA and JPEG files can be transferred onto the hard-disk from DVD, CD or USB, and the hard-disk can hold up to 270 DivX files, 10,000 photos or 7,000 music files on top of the regular MPEG-2 TV recordings. The same file types can also be copied from the hard-disk to DVD or USB device (or directly from USB to DVD), but MPEG-2 hard-disk recordings can’t be copied to USB.


On the outside, the unit is sturdily built and extremely attractive, boasting a sleek black finish with an attention-grabbing silver disc tray and controls. The info panel is easy to read, displaying the full channel name and other essential details, while a flap on the right hides FireWire, composite, S-video and stereo audio inputs plus a USB 2.0 port.

The back panel is equally busy, featuring HDMI, component, S-video and composite outputs, plus two SCART sockets – one RGB output for connection to a TV and one RGB input for recording from external sources. One of the more intriguing sockets is the coaxial digital audio input, which enables you to record 5.1-channel Dolby Digital or DTS soundtracks from external receivers and from the Freeview tuner (should terrestrial broadcasters ever start offering 5.1 broadcasts).


Another impressive feature is 1080p, 1080i or 720p upscaling for DVDs and hard-disk recordings, which should boost picture quality on a hi-def TV. Elsewhere, the Skip Commercial Block feature will be a godsend to those who get annoyed by the increasing amount of adverts on our screens. The unit automatically detects the beginning and end of commercial breaks, allowing you to jump past them by pressing the chapter skip button. Our test revealed that this works fairly well, accurately chopping out the adverts from a Channel 4 broadcast. The chapter points are set when the unit is in standby, and takes 30 minutes to process one hour of recording time, but the end result is worth waiting for. 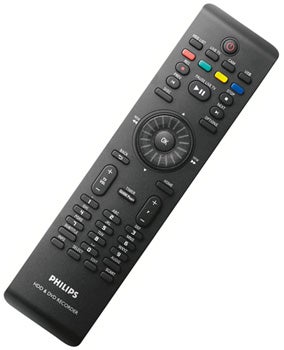 The G-Link feature enables you to control an external cable or satellite box through the Guide Plus system. In the box is a transmitter that you plug into the DVDR5570H and place next to your receiver. When a timer recording starts, it automatically sends infra-red signals to the receiver and changes it to the correct channel. The setup procedure can be quite convoluted but for owners of non-HDD digital TV receivers it’s worth persevering.


Elsewhere the DVDR5570H is surprisingly easy to use, despite its vast array of features. The Time Shift Buffer and video editing take some getting used to, but it doesn’t take long before they become second nature. The key to the recorder’s ease of use is a revamped remote that features a superb control wheel not found on the previous generation. It works very well, enabling you to scroll smoothly through the unit’s menus, and it comes into its own when searching through the Time Shift Buffer or finding a specific place in a recording. The rest of the buttons are thoughtfully arranged, although the lack of a dedicated button to change the recording mode is a real nuisance – you have to enter the setup menu, and by doing so you end up wiping the TSB.

The pastel blue onscreen menus are cleverly arranged, using a sequence of submenus that scroll into each other, though they’re a tad sluggish to respond at times. One other complaint is the selection of Guide Plus over a dedicated Freeview EPG, as it’s more cumbersome and requires more configuration, but the interface has been updated to make it clearer than it was on previous Philips recorders.


In performance terms, the DVDR5570H is a competent machine, but before singing its praises let’s get a slight niggle out of the way. Unlike most other digital recorders, when watching live TV the picture is shown in whatever recording mode is currently selected, which is fine if it’s HQ or SP but anything lower has a negative impact on picture quality due to the increased amount of block noise. If you regularly chop and change recording modes, you may find this an inconvenience, given that it can only be changed via the setup menu.

However, recording quality is superb in the top quality HQ mode, looking identical to the live feed. Colour reproduction is astonishingly rich and powerful, particularly the bright reds and blues of the ”Deal or No Deal” studio. Movement is smooth with low MPEG block noise, and there’s plenty of detail in the picture. There is a slight ghosting effect around some edges but nothing to get worked up about.


Picture quality remains strong until you hit EP, which looks too fuzzy and juddery to use for archiving, but it’s fine for everyday recordings. SLP and SEP on the other hand are borderline unwatchable, given that the blurred, noisy picture makes you feel like you’ve had a few too many pints. But mode for mode, the recording quality is every bit as good as other big-name machines on the market.


If you’re planning on using this unit as your main DVD player then you’ll have few complaints. The 1080p upscaling, potent colour saturation and well rendered detail ensure that movies look every bit as good as a decent standalone DVD player. Audio playback is similarly enjoyable, with CD material sounding clean and lively. Finding and playing music, photo and video files stored on the hard-disk is a simple task thanks to the helpfully arranged menus, plus our files played back with no problems.


In terms of features, looks and connections, the DVDR5570H is up there with the best models on the market. Time Shift Buffer is the killer feature, offering a level of playback versatility usually reserved for PVRs, while the Jukebox, Freeview tuner and 1080p upscaling make it feel suitably cutting-edge. What’s more, Philips has improved the ease-of-use factor considerably with an impressive new remote. Our only reservations stem from the sluggish menu system, inconvenient recording mode settings, the lack of series recording and the use of Guide Plus over a Philips-designed Freeview EPG, but aside from that the DVDR5570H is a terrific recorder.