This DVD/HDD recorder finds itself thrust onto a market currently being dominated by the likes of Sony and Panasonic, whose Freeview-equipped machines are earning plaudits left right and centre.


So with such strong competition, it seems bizarre that Philips has chosen not to put a digital tuner inside the DVDR3577H. With digital switchover already underway, it could be argued that every new recorder should feature a digital tuner, but a quick flick through Philips’ website reveals none of the listed DVD/HDD combis have one, which is even more puzzling.


It means, of course, that you’ll miss out on all the good stuff like direct timer recording from the 7-day Freeview EPG (the only assistance here is Video Plus) and series recording, as well as over 40 digital channels with crisp picture quality, digital text and interactive support.

But what’s most frustrating about this bewildering blip is that the deck boasts an otherwise cracking feature list. The hard-disk capacity is a sizeable 160GB, which offers up to 180 hours of recording time, and because Philips no longer limits its recorders to DVD+RW and +R, you can also use DVD-RW and DVD-R, as well as DVD+R Double Layer.


By far the most useful feature is Time Shift Buffer, which automatically stores whatever you’re watching in a cache memory (for up to six hours), allowing you to go back and watch parts again and even select sections to keep. You can also pause live TV and watch a programme from the hard disk while it’s still being recorded.


The hard disk can also be used to store and playback DivX, MP3, WMA and JPEG files transferred from DVD, CD or via the USB port located on the unit’s front panel. This jukebox functionality is becoming increasingly common among hard-disk recorders and makes this unit feel more like a complete entertainment hub than a straightforward time-shifting device.


There’s a decent range of connections on board, including an HDMI socket (v1.1) which outputs video in the 720p, 1080i and 1080p formats. Oddly there’s no component video output, but there are two RGB-capable SCART sockets (one input, one output) alongside less important sockets like S-video and composite out. The front panel features DV input for camcorders and composite/stereo audio inputs.

Prior to recording you can select from seven modes offering varying levels of picture quality – HQ uses the highest bitrate but only lets you record one hour on a DVD (or two hours on a DVD+R DL disc), whereas the lowest-quality SEP mode offers eight hours on DVD but with poor picture quality.


After making a recording, a limited but useful array of editing features are available. You can split or merge chapters, divide titles and set chapter markers to hide sections that you don’t want. These basic edits should suffice for casual users, but if you require more flexible non-linear functions (like RAM-style playlist editing, for example) then look elsewhere. 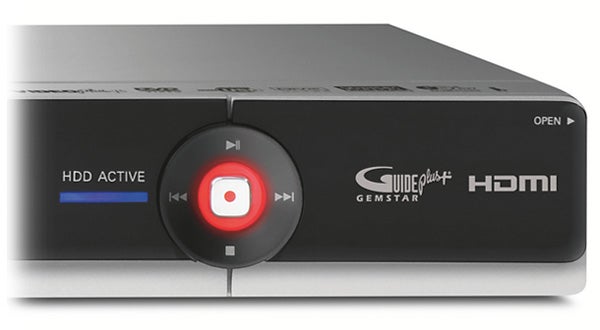 In the past, operating Philips’ digital recorders has been like wading through Marmite due to their sluggish response times and illogical menus. Thankfully Philips has put that right this time round with a much zippier operating system and a terrific menu system that resembles the one found on the company’s flat-panel TVs. Other onscreen displays, like Time Shift Buffer and the recorded programmes list are also well presented.


The only ease-of-use issue we encountered is the lack of a dedicated button for changing the recording mode, which means you have to do it via the setup menu (which annoyingly clears the Time Shift Buffer).


Before moving onto performance, a word about the deck’s design – it’s one of the slimmest and most attractive DVD/HDD recorders we’ve ever encountered, sporting a lovely mirrored fascia and a red ring that illuminates when recording. 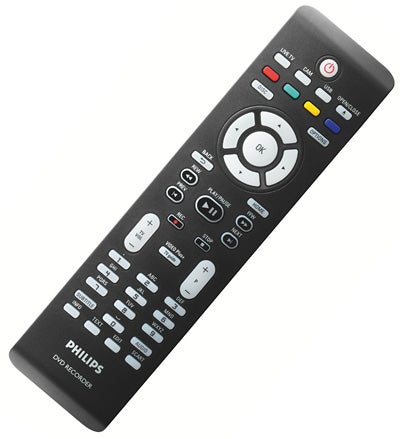 With only an analogue tuner on board, the unit struggles to match the sort of live picture quality you get from a decent Freeview-equipped recorder. Edge definition is softer and colours lack the noise-free intensity that DVB-T broadcasting affords. Pictures are actually pretty decent as analogue TV goes but when compared with what you could be watching, pretty decent just isn’t good enough.


Another let-down is that the unit displays live TV in the currently selected recording mode, which is fine when you leave it in HQ but a problem when set to anything lower than LP.


However, the quality of the unit’s MPEG encoding is impressive, with recorded pictures looking exactly the same as the live broadcast in the top-quality HQ mode. This is great news if you’re feeding in an RGB signal from an external digital terrestrial, satellite or cable receiver as the resulting recordings are superb, characterised by vibrant colours and sharp detail reproduction.

Recording quality continues in this vein in the SP and SPP modes, both of which exhibit only a slight drop in quality from HQ, but in LP the bitrate reduction really starts to take its toll on picture quality. You can spot the first signs of dotty pixel noise and a smudgy ‘haze’ surrounding moving objects, neither of which makes the picture unwatchable but you certainly wouldn’t use this mode to archive your wedding video.


Motion starts to look even more juddery in SLP and SEP modes and there are noticeable dollops of block noise, but considering how much recording time they offer it’s a sacrifice worth making – just try and avoid fast-moving or particularly detail-packed programmes.

Thanks to the inclusion of HDMI output and video upscaling, commercial DVD playback looks great. Set to 1080p and viewed on a Full HD LCD, ”King Kong” is packed with detail, devoid of noise and bursting with strong sumptuous colours that give pictures plenty of oomph. The RGB output produces similarly arresting images, with only a slight increase in noise revealing the signal’s analogue origins.


Audio quality is exactly what you’d expect from a jack of all trades like this – clean, audible Dolby Digital-encoded stereo sound with TV recordings; terrific 5.1-channel movie sound through an amp; and enjoyable CD playback.


Despite being an attractive, feature-packed and modestly priced combi, we can’t help but wonder how much better the DVDR3577H could have been with a digital tuner on board. As it stands, the analogue tuner will no doubt make many people overlook this otherwise superb recorder in the run up to digital switchover.


We could understand it if the DVDR3577H was the token analogue model in an otherwise digital-ready range, but this isn’t the case – none of Philips’ latest HDD recorders comes with built-in Freeview, which only serves to highlight the superiority of recorders from the likes of Sony and Panasonic.


This is a real shame as there’s plenty to admire about the DVDR3577H, particularly the brilliant Time Shift Buffer feature and 1080p upscaling.