The Philips Fidelio range is one of the best iPhone docks series you’ll find, home to such classics as the DS9000 – one of our all-time favourites. If you don’t want to spend almost £400 on a dock though, the DS3020 may be more up your street. It’s a tiny little throne for your iPhone or iPod, and can be found for less than £50 if you shop around, and proves that a small stature and small price doesn’t necessarily entail a small, weak sound. 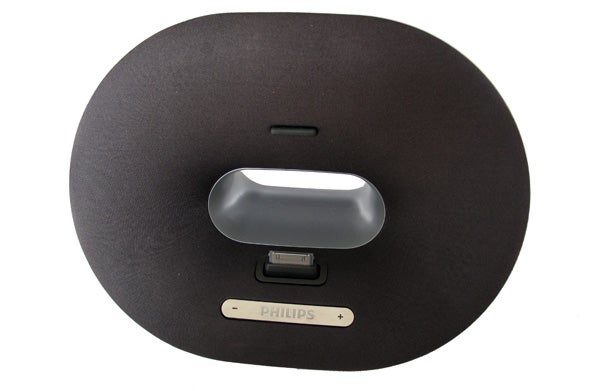 In keeping with the design of the rest of the Fidelio range’s wares, the Philips DS3020 is an exceedingly curvaceous little number. Its back could be a cutaway from a shiny, glossy white sphere of plastic, while the front blossoms out like the end of a brass instrument. Part sumptuous, part simple, Philips has aced a balance between cuteness, minimalist design and all-round “lifestyle-leaning” good taste.

The front is covered in grey fabric that’s only interrupted for the lollipop of brushed metal near the bottom, home to the Philips logo and volume controls, the dock connector and a small rubber buffer to rest against your device’s back. The dock socket moves forward and back slightly on a hinge, enabling the DS3020 to take on iPads as well as iPhones, iPod Touches and iPod Classic players. 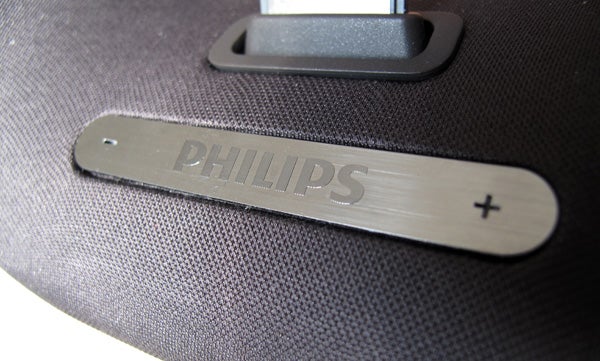 A large power button sits on the top of the dock, amid the shiny white plastic of its back half, but it’s not visible from front-on and so doesn’t spoil the styling of the otherwise unadulterated design. We think it’s damn cute. Like a little designer chair for your iPhone. 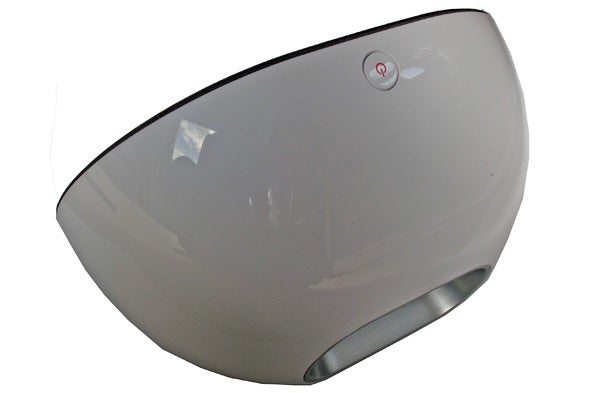 The small footprint ensures that while the design takes its own looks seriously, it’s nevertheless very practical – small enough to fit on bedside tables, or even between the microwave and toaster in the kitchen. Take off the plastic plate on its bottom and the practicality of the DS3020 gets another boost. It covers the battery compartment. Although it’s primarily to be used as an at-home dock, this little wonder can also be powered by four AA batteries (offering up to 8hrs of playback).

Thanks to the rip-able fabric front and the slightly bulbous design, this isn’t a hugely portable dock. It even offers a miniUSB slot to connect the dock to a PC in order to enable on-dock sync’ing. But for occasional social gatherings in the garden, or perhaps camping trips, the battery feature could come in very handy. 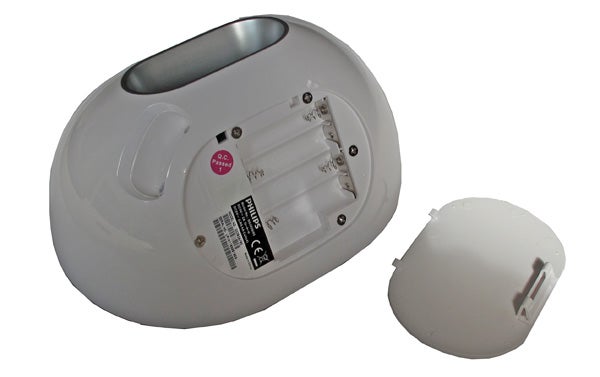 One final notch on its features bedpost is the auxiliary 3.5mm input, letting you plug in other devices easily, such as smartphones or (shock horror) non-Apple MP3 players.  None of these additional features intrude on the design of the Philips DS3020, and yet functionality-wise they’re absolutely those we’d pick for a device like this. A video output is something we’d likely never use on a dock this size and an iPhone or iPod Touch can take care of alarm clock functionality itself. Philips even offers this functionality with its free Fidelio app, available from iTunes.

The Philips DS3020 dock’s Fidelio iOS app doesn’t add any features to the dock directly, but does do so through your iPhone or iPod Touch. It offers a clock, alarms, weather and Internet radio. You’ll need to download TuneIn Radio to use the latter though, as it helps to power the Fidelio app.

It doesn’t do much that you could get from any number of non-Philips apps, and is unremarkable in the things it does do, but it does offer one very neat addition. You can choose whether to make the dock charge the iOS device or not – in a mains-only unit that’s a somewhat pointless question (unless you’re obsessed with maintaining the lifespan of your battery), but it’s more useful in a potentially battery-powered unit. 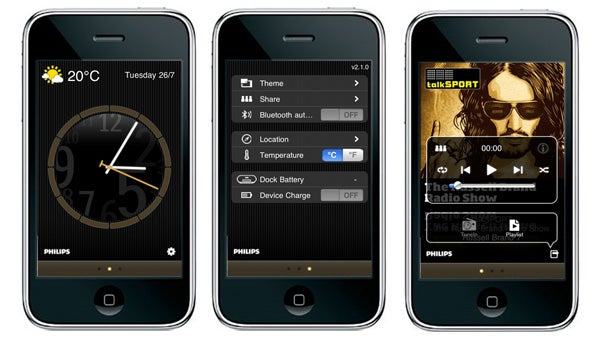 The Philips DS3020 is small and in some ways very clever. But does it sound any good?

It absolutely does. This tiddly, pretty cheap dock offers much better sound quality than we expected, making it a near-perfect bedroom or secondary dock. 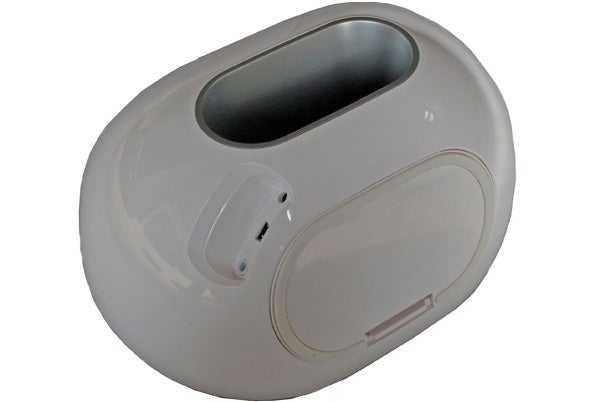 It uses a pair of Neodynium speakers, as seen in the older DS3000, but boasts slightly more power – 10w RMS against 8W. Although still tiny, it produces sound of impressive power and detail. The low-end is surprisingly powerful – with bass that, while not particularly deep or resonant, packs a meaty punch.

To provide you with some tunes while cooking, working or doing a spot of DIY (outside or in), the Philips DS3020 is wonderful. If you want it to replace a hi-fi, you’re asking a bit too much, but would anyone seriously expect that from a dock with a base not much bigger than the footprint of a couple of Coke cans? 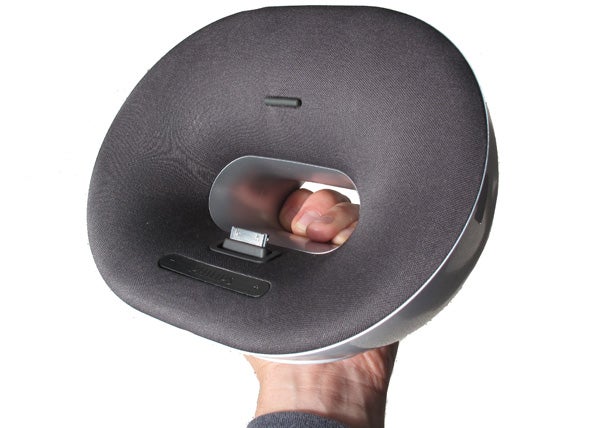 Remarkably, it holds onto its sonic dignity even as its little speakers are pushed hard, only sounding strained when pushed close to its limits. Naturally, it can’t compete with larger, more expensive units like the Fidelio DS9 on volume, scale or sound quality, but it can nevertheless produce enough volume to fill small or medium-sized rooms.

High-end detail impresses too, offering fairly natural-sounding full-throated vocal reproduction for £50. The Philips DS3020 performs out of its size and price league across the board. And it hasn’t even sacrificed looks to get there. 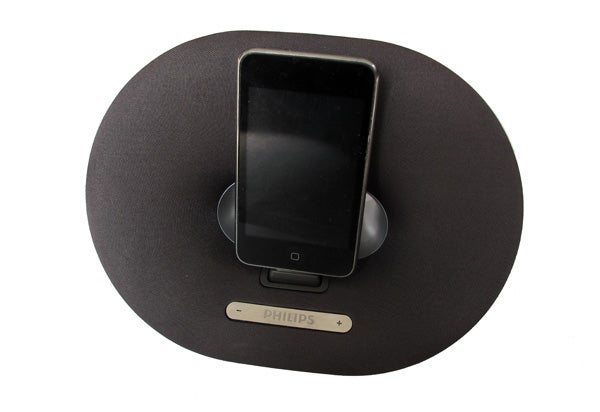 Head to the high street and you’ll find plenty of docks selling around £50, from names like Gear4 and Kitsound. However, we’re yet to come across one that offers as attractive a mixture of design and sound quality as the Fidelio DS3020 has. It’s a steal.

It looks good. It sounds good. It won’t leave a gaping hole in your bank balance. If there’s something to dislike about the Philips DS3020, we’re yet to find it. Bigger, more expensive docks in the Fidelio range will naturally offer better sound quality but if you want something small this is a brilliant device.