Have you ever thought to yourself, ”I know what’s missing from all those normal portable DVD players; an iPod dock!”


No, nor have I, but that’s exactly what Philips has brought us with its new DCP951 and I must admit, it’s a brilliant idea. No longer are you restricted to the same three children’s DVDs for your entire holiday; now you can access an iPod full of video clips and movies, as well as your extensive music collection and even a healthy selection of audio books – your children will never be bored again!


The actual device looks a little different to your average portable DVD player. Rather than a clamshell design, the DCP951 takes on a tablet form with its 9in screen filling the majority of one side and the door for the DVD drive taking up the back. While this leaves the screen open to the elements and potential scratches, Philips has included a soft carry-pouch to keep everything protected. 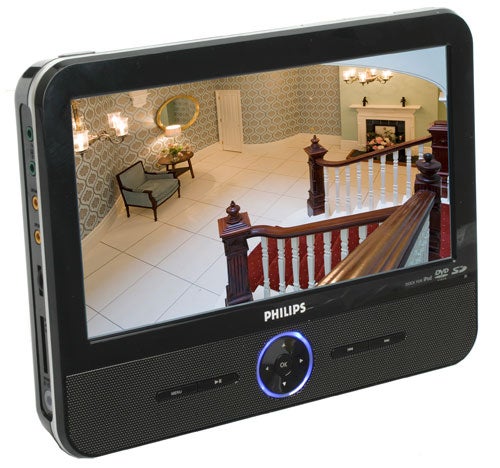 Glossy black is the order of the day when it comes to styling, with the whole front, back and sides finished in the same shiny plastic. Sadly, though, it’s the type of plastic we can’t see staying scratch-free for long. There are a few silver trimmings here and there to try and spruce things up but essentially this is a device built to fit its lowly £200 budget, and it shows. 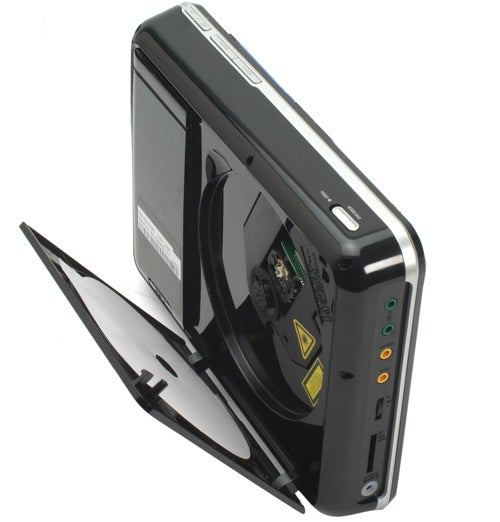 The screen itself measures nine inches diagonally, which is plenty large enough to comfortably watch a film with the player held up to a metre or two away. Not so, the screen’s resolution, though. At just 640×220 pixels, it can’t even show the full detail of a DVD and is in fact less than the video capabilities of an iPod.


Now this is fairly typical for portable DVD players so you shouldn’t consider this one to be much worse than the competition but it doesn’t change the fact the screen is obviously poor quality. When you consider netbooks that cost £250 have considerably better screens and manage to pack in all the other features of a notebook (except obviously an optical disc drive) it seems unlikely Philips and the rest can’t source some higher quality panels.

Under the screen are the main controls. From these you can control the basics of playback – play/pause, forward chapter, back chapter – and access and navigate the menu. It’s all pretty basic but they do the job. To handle more sophisticated functions, though, you’ll need the remote, which for a relatively budget device is well made.


Rather than the usual popper-buttons, it has individual rubber ones that, although a little mushy in operation, are tactile and easy to use. Best of all, though, if you’re not using the iPod dock, you can store the remote inside the player. However, one particularly odd thing is the remote’s lack of volume control. Instead, the volume can only be adjusted manually using an archaic wheel found on the device – rather than a digital volume control. We find this baffling as this is surely one of the most frequently used functions for a remote? I suppose the close proximity with which you’ll be using the player means it’s deemed unnecessary, but then why have a remote at all?!

A pair of speakers are also nestled behind the grille and although they are at least stereo there’s little else good to be said about them. They sound tinny and their ability to mask the dialogue under just about every other sound was particularly annoying.


Along the left edge are the various inputs and outputs. Most notable among these are the twin headphones sockets, which make shared viewing a convenient option. However, the level of background noise from these sockets was quite outrageous. Watch a movie with a half decent pair of headphones plugged in and, though you may not permanently damage your hearing, you’re ears will be ringing for hours afterwards.

We do, however, like the inclusion of an SD/MMC card slot, which can be used to view photos (jpeg/jpg), listen to music (mp3), and watch videos (DivX). Also present is the aforementioned volume wheel, the power socket, and AV inputs and outputs that enable you to stream composite video and stereo audio into or out of the player.


On the top is the DVD door eject button along with the on/off, source selection, and monitor buttons. The monitor button is used to switch between using the player’s screen or piping the signal out to an attached TV/monitor (using the AV out connection) – a potentially useful feature if your hotel has a large TV.

Press the iPod Eject button on the right edge and the iPod dock tray pops open, ready to be slid out. It’s compatible with all conventional iPods including the iPod Touch. However it doesn’t support the iPhone, something that’s made abundantly obvious by the fact you can’t even close the tray with the iPhone installed. 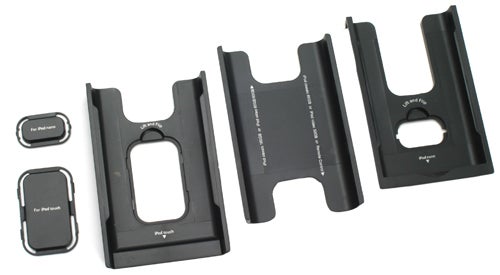 A variety of inserts are used to securely hold the different shaped iPods in place when the player is in use. However, there’s no guarantee these inserts will remain compatible with future iPods and we feel a more universal approach to holding the iPod would’ve been more sensible. 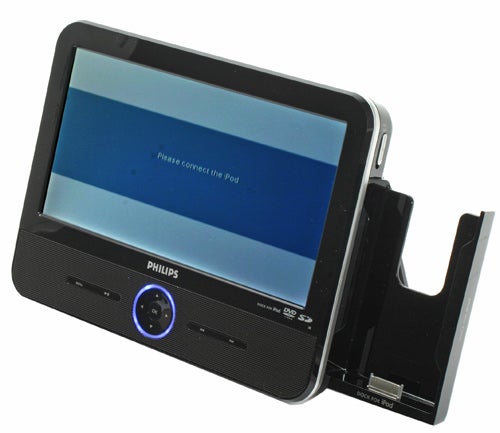 Once the iPod is inserted you can control its various functions using the player’s menus so potentially you won’t need to remove your iPod for an entire holiday. The menus are a little clunky, mainly due to the appallingly low resolution of the screen but at least they’re neatly laid out and intuitive to use.


Image quality was unsurprisingly fairly poor in terms of clarity and detail but it was also below par in other aspects. Colours looked washed out, brightness was quite poor and though the image remained visible and the colours reasonably accurate when viewed from an angle, the drop off in brightness made watching dark moody films like ”The Bourne Identity” a real chore for more than one person.


The idea of augmenting DVD playback by integrating the iPod is a good one and, on the whole, Philips’ DCP951 achieves this in a reasonably priced package with plenty of features that will no doubt appeal to many. However, in performance terms, if you consider yourself discerning when it comes to image and sound quality you’ll be disappointed.