I’ve looked at a number of Philips products recently and all have exhibited something of a trend; they were priced and performed just above the budget brands but did little to distinguish themselves, which is a shame considering Philips is a company we’d normally expect better things from. So it is with the product I’m looking at today, the DC910. This is an iPod speaker dock with built-in FM radio and it just about epitomises this trend I’ve witnessed, though it does have a few tricks up its sleeve that could prove attractive to you.

Starting with its styling and we can see it’s rather attractive with a sleek single black speaker grill on the front and slim silver surround to set it off. It’s simple but classy and it’s a look that works just as well in the flesh as it does in the glamour shots. The fit and finish is also good quality with none of the usual tell tale signs of cheap products – things like the little marks that can be left behind by the moulds that are used to shape the plastic.

One of the DC910’s two standout features is its iPod dock. Quite simply, it can rotate so, when using an iPod Touch (it’s not officially compatible with iPhones and they do struggle to fit in the adapters that are used to hold the iPod in place), you can watch video in landscape mode. Now that may sound like a bit of a gimmick and for the most part I’d probably agree – certainly I wouldn’t see it as enough of a feature to recommend this device over any other. However, it’s a nice extra to have for those half dozen occasions when you might want to use it. 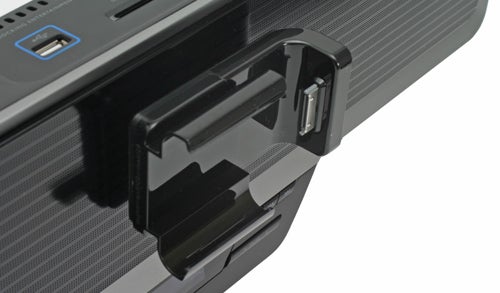 Another thing that’s likely to be only of occasional use is the DC910’s inclusion of a USB socket and SD card slot. These can be used to play music stored on USB drives and SD cards, which can be formatted in either FAT12, FAT16, or FAT32. File format support is not brilliant, with DRM tracks not supported for a start, but the basics of mp3 and WMA are there. 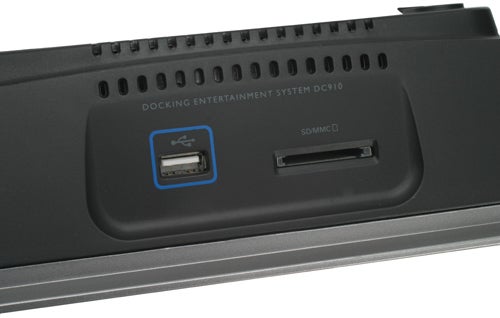 There is a structure to the way the DC910 reads the music stored on USB and SD devices, though it’s not as comprehensive as you may hope. Essentially it will follow an alphabetical file and folder structure, up to a depth of eight folders, and cycle through the whole lot in order. Unfortunately, while you may know what order your music may be played in, there’s no way to browse by folder, you just have to cycle through one track after the next until you get to where you want to be.

Filenames are displayed on the small LCD screen that sits between the main controls on the front. This is also used to display clock functions, tuning settings, and the source you’re currently listening to. It is a bit small and awkward to read – especially as it’s often obscured by the iPod dock – but considering a large proportion of the time you’ll be navigating using the screen on your iPod, it’s forgiveable.

The front panel controls are all logically laid out and seem simple enough. We did have a couple of little issues though. First was the slightly odd fact that the Dynamic Bass Boost (DBB) and Digital Sound Control (DSC) buttons only work when listening to music from the radio or USB/SD device but not with the iPod. Also, we gave up on working out how to set the time and alarm and eventually had to refer to the manual, which is a rare occurrence on such a simple device. 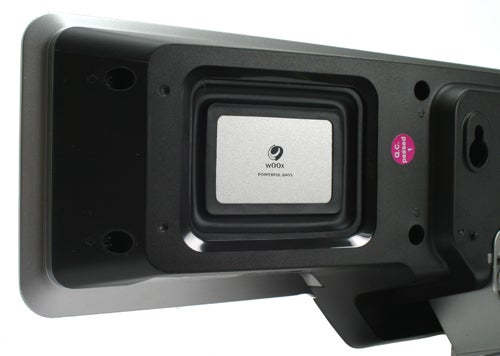 Round the back the most prominent features are actually the unusually exposed wOOx subwoofers. I’m sure there’s some pseudo-logical mumbo jumbo about how these drivers need to be left exposed to enhance some kind of audio effect but frankly it just smacks of gimmickry. It’s also likely to result in you accidentally sticking a finger through the driver when you go to pick the DC910 up. Incidentally, there are four more speakers hidden behind the front grill to make up a seemingly impressive total of six drivers in this small unit. We’ll come to why it’s only ‘seemingly impressive’ later.


The power brick, which is surprisingly large for a relatively small device, plugs into the back alongside the two auxiliary 3.5mm line-in jacks and the incredibly thin, hard-wired aerial. Despite its piddling proportions the aerial did actually do a good job and we were seldom left wanting for our favourite stations. 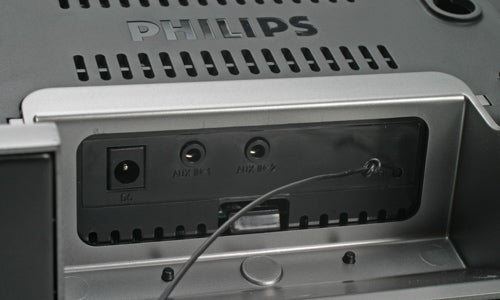 Surrounding these various sockets is the mount for the silver stand section, which can actually be removed so you can hang the DC910 on a wall. Considering its relatively lightweight construction, hanging the DC910 on a wall seems like quite a sensible and easy option. However, considering you’ll need to hang the aerial somewhere and the power cable will be trailing down below, we’re not sure there is any aesthetic merit to doing this. It’s an option if you’re short of flat surfaces, though.

A remote is included and we’re pleased to see that all the dc910’s functions can be controlled using it, which is always convenient. The only thing it can’t do is fully control the iPod. Here it’s limited to just skipping tracks in your current playlist, playing and pausing music, and controlling volume.

For sound quality testing, I listened to my usual eclectic mix of music – much to the chagrin of my colleagues – that includes everything from classic solo piano to the biggest house beats you can imagine, with a healthy does of classic and heavy metal thrown in for good measure. Unfortunately, whatever genre I choose the DC910 seldom excelled. 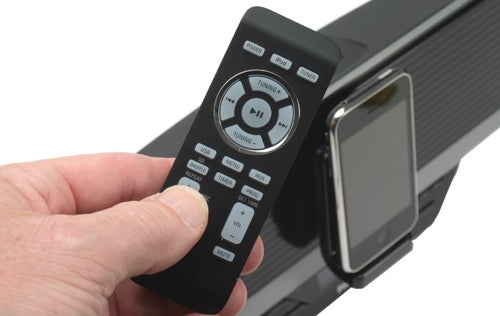 About the most succinct way of describing the overall effect is that it manages to sound both muffled and tinny at the same time. More specifically, there’s a harsh edge to the treble and a very unnatural bass that, as is typical with devices that use multiple drivers, seems to only kick in at certain frequencies meaning that bass lines in particular ebb and flow in an undesirable manner.


To its credit, the DC910 manages to create a surprisingly wide soundstage that belies its diminutive size and close speaker placement. Moreover, for casual listening, especially to pop and less sophisticated rock music, it is perfectly adequate. Unfortunately it costs £130 and for just £20 or £30 more there are much better sounding devices to be had. Namely, the Boston Acoustics Duo-i.


The Philips DC910 is the epitome of a generic ipod dock and radio. It looks nice, is reasonably well made, is easy to use, and sounds ok. The trouble is, it costs a not inconsiderable £130 and at that price it’s too close to much more accomplished models. If you can find it for closer to £100, though, it could be worth a punt.