When you buy an LCD monitor, one of the most important considerations after resolution and size is panel type. TN is found in the vast majority of affordable displays, and due to its poor viewing angles is probably the least desirable panel tech – though its quick response does make it the best choice for pro-level gamers.

However, arguably the best balance between speed and quality is found with IPS (and Samsung’s PLS equivalent). From once only being found in high-end professional monitors costing hundreds of pounds, IPS has moved down to very affordable price points, especially in 23in and 24in displays. The Philips Blade 2 is one such: a nicely designed, slim 23in IPS monitor offering multiple digital inputs and a 1080p resolution for around £170. 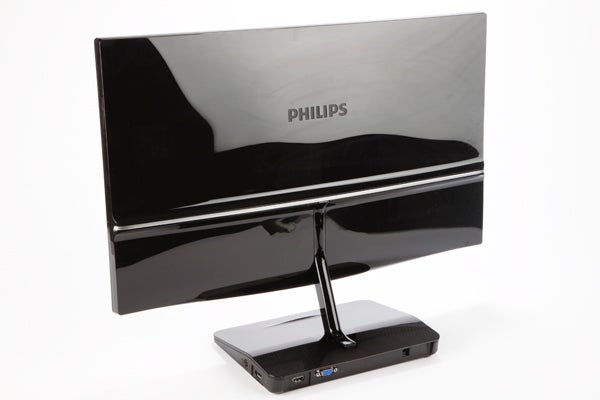 Design
Straight off we have one niggle to get out of the way: Philips still overcomplicates its model numbers. Despite being called the Blade 2 – a nice, simple name – the monitor has Brilliance 239Cqh on its bezel and Brilliance 239C4Q on its label sticker. This shouldn’t be confused with glowing-bezel models like the Philips Brilliance 220X1, however, as the Brilliance 239Cqh/239C4Q is just an ‘ordinary’ monitor without extra LED ‘magic’.

That out of the way, it’s worth mentioning that Philips’s packaging is secure and easy, and the company provides all the cables and manuals you would want. All that’s missing is a lint-free cloth to keep the Blade 2’s shiny plastic looking its best. 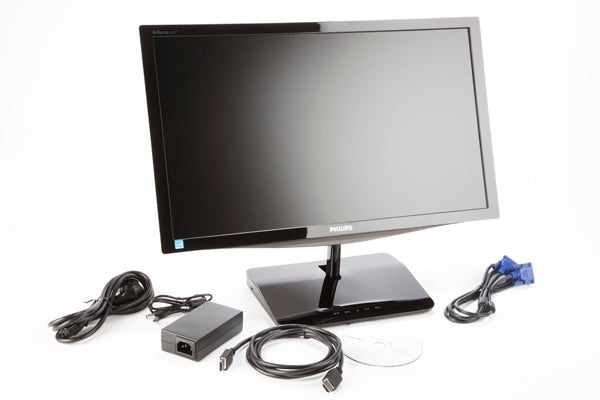 Getting to the monitor itself, it comes fully assembled with a base that folds away for a slim storage profile, therefore setting it up is as easy as tilting the stand to an upright position. Unfortunately, this ease comes at a price: the Blade 2 doesn’t offer any adjustability aside from some very generous tilt. While this is the case for most sub-£200 IPS monitors, it doesn’t get less disappointing, and screens like Dell’s £175 IPS UltraSharp U2312HM offers full height adjustment and pivot. 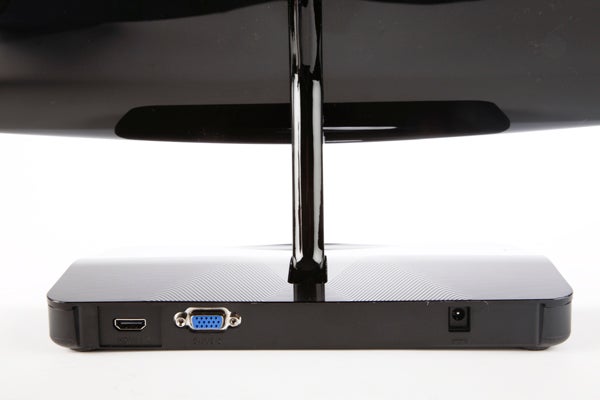 At least the limited adjustability on the Blade 2 lets its super-slim glossy black design take centre stage. The screen is surrounded by an even bezel that looks like it’s the same width all-round, only interrupted by a subtle brushed-silver curve at its base. The slim stand transitions smoothly to an unusual wedge-shaped base which cleverly incorporates the screen’s touch controls and connectivity. We really love this feature as it makes the controls incredibly easy to access and reduces visible cable clutter. 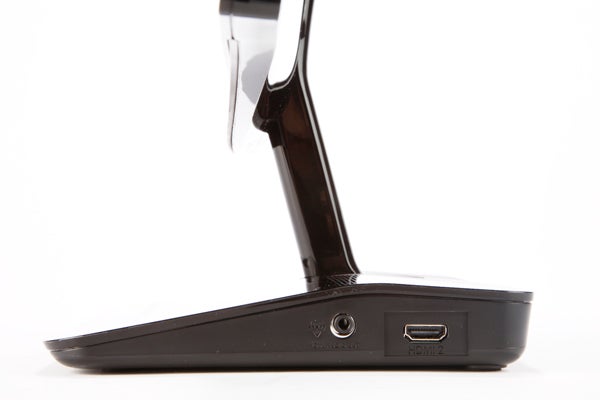 Connectivity
On the back you get VGA plus the first HDMI port, while the right houses a headphone jack for outputting audio from HDMI and the second HDMI port. There’s no DVI, but most modern laptops and video cards offer the HDMI digital standard, and adapters are cheap and plentiful so it’s hardly an issue.

The Philips Blade 2 controls and OSD are a bit of a mixed bag. Its touch controls are well-spaced and responsive, but not particularly intuitive in their layout and therefore in the way you navigate through the menus. Some of the ‘button’ shortcuts are also not very logical, with response time overdrive adjustment getting its own dedicated one. Fingerprints will also remain to mutely accuse users on the glossy black plastic of the touch area. 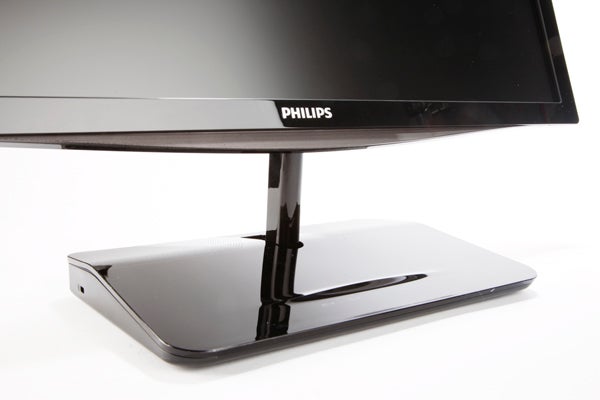 On the other hand, the menus are some of the clearest and easiest we’ve ever seen. Headings are logically divided with everything exactly where you would want it to be, and labels are mostly no-nonsense. Every setting you would want to access is available, including the aforementioned response time overdrive regulation, detailed colour settings, and a generous range of presets. There’s even in-monitor volume control. 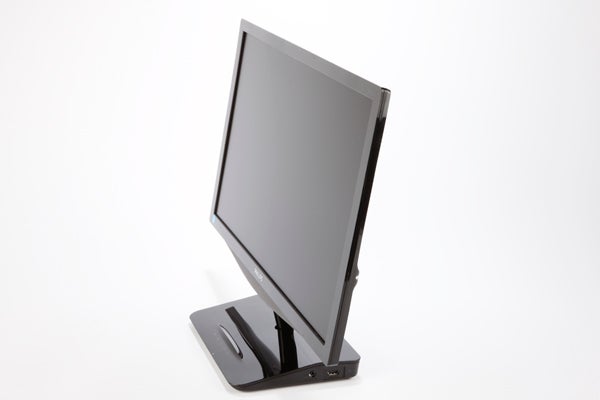 Image quality
So what’s image quality like on this LED-backlit, 23in IPS monitor? The Blade 2 sports a sharp Full HD (1,920 x 1,080) resolution that gives you plenty of virtual real estate, and a semi-matt finish that ensures minimal reflections. Despite the lack of a glossy layer, colours are bright and punchy, and blacks reasonably deep. Dark detailing is also excellent, with even the subtlest gradations easily visible, and response time should be adequate for all but the most trigger-happy gamers.

Custom settings out of the box were decent too, though as usual brightness was annoyingly set at 100 percent. From the sides and bottom, the superior viewing angles IPS offers over TN are also in evidence. 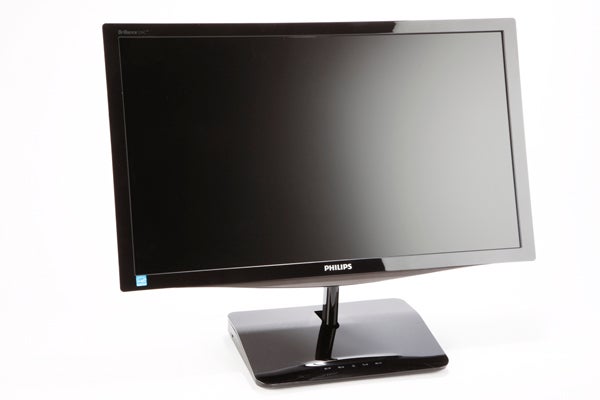 Unfortunately it’s not all good news. From the top, there’s strong contrast shift, more so than on most IPS-based displays we’ve tested. While backlighting looks even in daylight, in a darkened environment subtle inconsistencies become apparent and the purple tint that plagues blacks on many IPS screens to lesser extents is annoyingly obvious here. 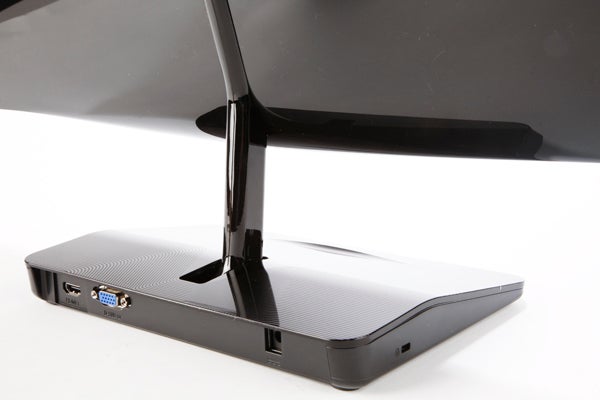 Value
Despite its viewing angle and black tingeing issues, the Philips Blade 2 is a sleek, well-connected 23in monitor with decent image quality that’s very affordable. However, the very similar IPS 23in AOC i2353Fh is currently available for around £144 and its brushed metal finish is arguably more attractive. Also, Dell’s aforementioned UltraSharp U2312HM, yet another 23in IPS monitor, offers a similar feature set but with a fully adjustable stand and built-in USB hub.

The Philips Blade 2, also known as the Brilliance 239Cqh, is a nicely designed 23in IPS monitor with good connectivity and decent image quality. However, it’s not without a few flaws – and if you’re not particularly enamoured of its design there are cheaper alternatives, while the same money will get you a fully adjustable rival. Though it’s still worth considering, this keeps the Blade 2 from a Recommended Award until its price drops.