Philips doesn’t make a song and dance about it, but its Blu-ray players have been among the best on the market in recent years, mixing attractive spec sheets with dashing designs and high-quality hi-def movie playback. None has impressed us more than the BDP7500, the second version of which added 3D support to its already extensive range of talents.

That player has been superseded this year by the equally great-looking BDP7600, which offers 3D playback from the box alongside loads of other goodies that’ll have high-profile rivals like Panasonic, Sony and Samsung looking over their shoulders. It’s one of a handful of new Philips players introduced this year, sitting above the entry-level 3000 series and step-up 5000 series.

In terms of design, let’s not beat about the bush – the BDP7600 is a stunner. It’s really refreshing to see Philips stepping away from the black box design favoured by rivals with instantly striking silver bodywork, embellished with all manner of elegant curves and ridges. Most of the fascia is taken up by a mirrored panel, embedded into which is an LED display panel and disc tray. The lip protruding from the bottom features a row of touch-sensitive buttons that light up when the deck is activated, giving it a wonderfully futuristic feel. It’s not just lovely to look at – pick it up and its superb build quality is instantly apparent, thanks to the sturdy aluminium casing designed to keep unwanted vibration at bay. 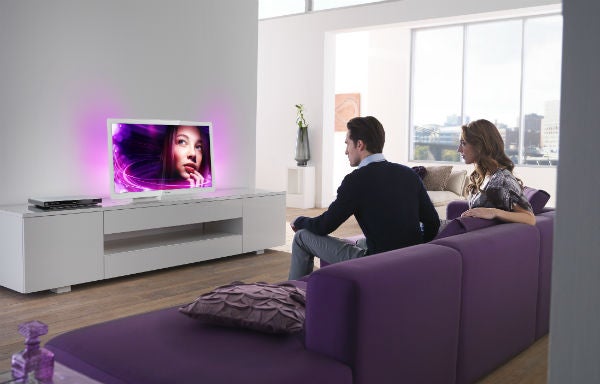 Do a 180 and you’ll encounter an unusually generous range of connections. Most unexpected are 7.1-channel analogue outputs, which will come in handy if your ancient AV receiver lacks HDMI inputs but you want to enjoy HD audio soundtracks. It’s also good to see a choice of both coaxial and optical digital audio outputs, plus this might be the first time we’ve seen an SD card on the back panel of a Blu-ray player. This can be used to provide the memory needed to download BD Live content or video on demand found on the deck’s Net TV feature, but it can’t be used for media playback – that’s left to the USB port on the front. The socket line-up is completed by HDMI v1.4, composite, analogue stereo/surround back outputs and an Ethernet port.

Like most of its rivals, the BDP7600 boasts a built-in 802.11n Wi-Fi adapter, which means there’s no need to muck about with pricey USB dongles or cumbersome Ethernet cables if you want to access BD Live, enjoy Philips’ internet portal or stream music, videos and photos from PCs on your home network using the DLNA Network Link feature. With so many homes using wireless routers, built-in Wi-Fi is now essential and we’d expect nothing less from a £200 player.

The BDP7600 will play a wide range of file formats, including DivX HD, MKV, AVI, MP4, AVCHD, MPEG-1, XviD, WMV, MP3, WMA, WAV and JPEG. These can be streamed or played locally from a USB storage device. The USB port will also support external HDDs using the FAT16 or FAT32 file system.

As mentioned, the BDP7600 also features Net TV, which brings a bunch of Philips’ partner websites to your TV. The modest list of sites listed on the main menu currently includes YouTube, Twitter, Picasa, Cartoon Network, Box Office 365, France 24, Tune In Radio, Funspot, Screen Dreams, iConcerts and MeteoConsult, but you can add others from the App Gallery.

But the thing that sets Net TV apart from other web portals is that you can browse the internet at large on your TV, putting virtually any online entertainment source at your disposal – provided the deck’s browser can handle it. We navigated our way to the BBC iPlayer and tried to watch a video, but the lack of Flash Player scuppered our chances and attempts to download it resulted in the browser freezing. 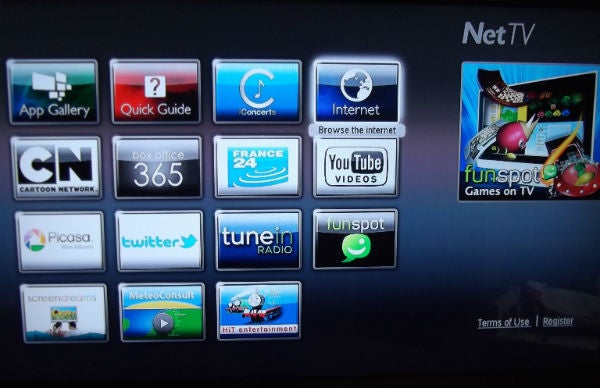 On a positive note, this new version of Net TV is so much easier to use than before. The layout of the main menu is gorgeous, using large onscreen ‘buttons’ for each app, all presented in detailed, colourful HD graphics. It’s also much faster to react, plus entering text or selecting links seems to take less time. It’s still not the ideal way to browse the web but better than expected. And if the remote seems too cumbersome to tolerate, then you can connect a keyboard to the front-mounted USB port.

Two other interesting features pop up on the spec sheet. Philips has developed a Smartphone app that allows you to control the BDP7600 with an iPhone or Android. And for movie playback, Philips’ CinemaPerfect HD engine works to eliminate noise resulting from the MPEG compression process, sharpening up the image and boosting colours along the way.

3D is all the rage right now and sure enough this player is fully equipped to send 3D pictures to a compatible TV. However, there’s none of the image adjustments or 2D to 3D conversion found on Panasonic or Sony’s latest players – all you can do is turn 3D to Auto or Off in the setup menu.

We’ve praised past Philips decks for their ease of use, and it’s great to see the BDP7600 adhering to the same user-friendly ethos. 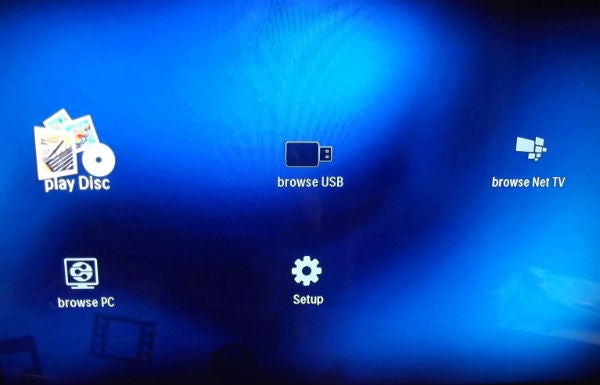 The all-important Home menu is your jump-off point for any function, basically six icons floating in front of a blue screen. Each one has a simple white icon and a plain-English description (‘browse USB’, ‘browse PC’ etc). It’s responsive and hassle-free. Select Setup and you get a more conventional list, but what we like are the explanations that appear at the bottom of the screen when you linger on them. Also cool are the large white icons that flash up onscreen when you press any playback button.

Browsing through USB drives or PC folders is easy enough. The menu box shows various types of content listed down the left. Highlight one, and your files are listed on the right with no annoying hesitation or unnecessary submenus. During disc playback, you can call up a menu at the touch of a button that contains all the frequently used settings and trickplay features. Overall operation isn’t as slick as Panasonic’s latest players but it’s not far behind. 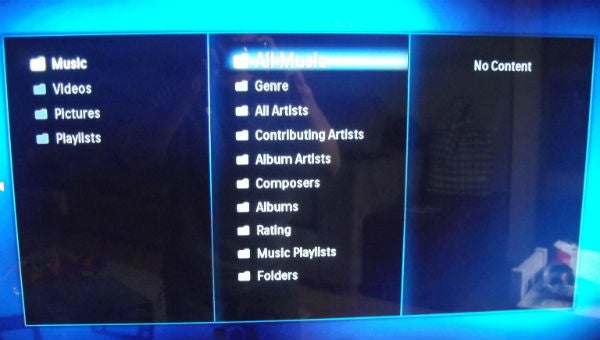 We also love the remote, which looks unlike any handset we’ve seen before. It’s oval shaped, with a curved, gloss-black back panel (which can be removed to fit batteries). It’s a real coffee table talking point, but thankfully it doesn’t put panache over practicality – the button arrangement is uncluttered, logical and considerate.

The BDP7600 loads Terminator Salvation in 40 seconds flat, which is pretty much the standard these days but fast nonetheless. Inception loaded in around half the time, and once the film gets underway you get an immediate sense of how good the Philips’ picture quality is.

The opening scenes inside the Japanese palace look as rich and opulent as the building itself, with luscious colours and pin-sharp detail covering every inch of the screen. The image is deep, cinematic and generally free from artefacts, although during the Paris scenes we did spot shimmering amid the vertical lines of the shop windows behind Ariadne.

During dark scenes, like the chemist’s basement in Mombasa, the BDP7600 never loses track of the objects and detail lurking in the shadows. The deck also keeps skin tones and pale colours looking natural, and blends colours without any banding. Motion is smooth and edges are rendered without any stepping or ghosting. This is an admirable 2D performance, which should keep hi-def movie lovers very happy indeed – particularly with a range of useful image adjustments on hand to enhance the pictures even further. 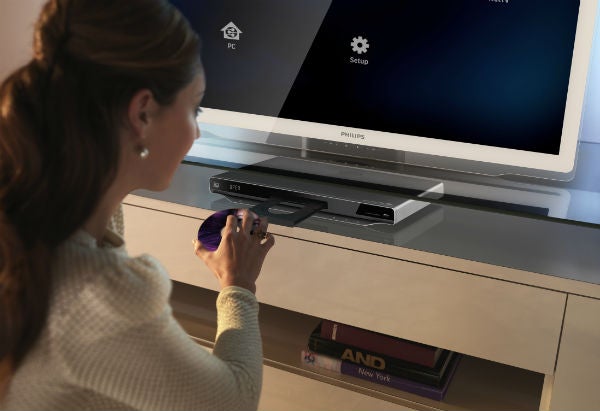 They’re found inside the setup menu or in the ‘quick’ menu during playback, which means you can tweak them as the film plays. They include a range of picture presets – Normal, Vivid, Enhanced, Dynamic and User. The User setting lets you adjust brightness, contrast saturation, artefact reduction, ACE (which we presume stands for Automatic Contrast Enhancement) and Detail Enhancement. These settings, particularly the last three, are very useful for fine-tuning the picture to taste. Detail Enhancement gets the image looking even sharper than usual and judicious use can be really beneficial, but set it too high and pictures start to look unnatural.

As for 3D we really can’t fault the quality of the BDP7600’s pictures. The depth and separation of the various layers and objects is spot on, ensuring a clean, sharp and absorbing picture. The 3D Blu-ray versions of Avatar, Monsters Vs Aliens and the Legends of the Guardians: The Owls of Ga’Hoole all looked spectacular through the BDP7600 and our LG test TV and you can’t ask for much more than that.

Finally we checked the deck’s performance with the Silicon Optix disc and it aced most of the tests. The edges of the jaggies test’s moving bars look as clean as a whistle and the Video Resolution Loss test is stable as they come. Only the Film Resolution Loss test presented a problem – the quick strobing inside the vertically striped boxes reveals a minor flaw in its motion processing.

The BDP7600 deserves a place on your shortlist for several reasons – its
elegant design, satisfying build quality, dazzling 2D and 3D pictures,
busy feature list and simple operating system. Feature highlights
include built-in Wi-Fi, Net TV, the longevity of which is boosted by
full internet browsing, and media streaming from PCs, while the wide
format support, detailed picture tweaks and smartphone control are also
welcome. Overall we’d probably still choose the DMP-BDT310 or BDT210 by
virtue of their slightly better picture quality, extra 3D features and
slicker menu system, but anyone who goes for the cheaper Philips won’t
be disappointed.