When we reviewed the original version of the BDP7500 back in January of this year, there was one vital ingredient missing from its already generous feature list – 3D compatibility. But now that the technology has started to take off, Philips has wisely revamped the BDP7500 for the 3D generation, and crucially it hasn’t bumped up the price to reflect its new-found talents.

If you can remember this deck when we reviewed it the first time round, you’ll know how smitten we were by its exquisite exterior design – thankfully, Philips has left this intact on the revamp. What we love most is that it looks unlike any other deck on the market, our silver sample providing a refreshing antidote to the black finish so prevalent in the Blu-ray market. But if silver’s not your bag then a black version is also available.


The fascia is close to a work of art, combining mirrored and brushed aluminium panels with a shiny silver trim, while a raised lip along the bottom – illuminated by a gentle blue light – is a lovely touch. What’s more, its build quality is similarly stunning. The sturdy metal casing gives it rigidity all too rare among sub-£200 machines, plus little things like the touch-sensitive controls and the sliding cover for the front-mounted USB port show great attention to detail and make it feel like real effort has gone into this deck’s construction.

Around the back is a generous array of AV connections, including all the sockets found on the original BDP7500 and a newly-added USB port for Philips’ Wi-Fi adapter (WUB1110, sold separately, supports 802.11b/g/n). We criticised the original version for its lack of wireless capabilities, and although it’s disappointing that Philips didn’t go the whole hog with built-in Wi-Fi, this is the next best thing. We also like the fact that Philips put this port on the back, so the adapter is hidden out of sight when connected.


Another major difference is that the HDMI chipset has been swapped from v1.3 to v1.4 in order to support those Full HD 3D images. Aside from that, you get component, composite, analogue stereo, optical and coaxial digital audio outputs, as well as an Ethernet port that lets you connect to the Internet the old fashioned way. Rounding up the selection is a set of 7.1-channel analogue audio outputs, which could prove very handy if your AV receiver doesn’t sport 3D-ready HDMI v1.4 inputs but you want to enjoy HD audio alongside your 3D pictures.

The range of features is excellent. Like the other big names in Blu-ray – Sony, Panasonic, LG and Samsung – Philips throws in a bunch of DLNA networking and web-enabled features that expand the player’s remit beyond Blu-ray discs, and the inclusion of a wireless connection makes them wonderfully easy to access. First up, you can stream music, videos and photos from networked PCs, a function it performs with admirable slickness. On top of that you can stream or download BD Live content, and the 1GB of built-in memory means you don’t need to plug in USB storage to do so.


Finally, there’s Philips’ Net TV service, which like Sony’s Bravia Internet Video or LG’s NetCast zaps a range of Internet applications directly to your TV. The main page uses a simple but eye-catching layout, with small thumbnails for each application and a list of options on the right of the screen.

The range of available services on Net TV is plentiful and there are some familiar names on there like YouTube, Dailymotion, and Picasa. You’ll also find Cartoon Network and HiT Entertainment, both of which require a subscription, while Box Office 365 offers TV shows and movies on demand from £2.99 a month.


Elsewhere it’s padded out with less appealing links like Volkswagen, France 24 and MeteoConsult, but what sets Net TV apart from rival services is that you can browse any site on the Internet. This is a frustrating experience, as entering web addresses and other text is a cumbersome process using the remote and the player doesn’t support Flash, which means you won’t be chucking out your laptop any time soon. It does, however, load pages quickly and the cursor moves from link to link with pleasing speed.


The USB port on the front panel allows you to connect flash drives, USB card readers or external HDDs (FAT only) and playback DivX Plus HD, MKV, AVCHD, MP3, WMA, AAC and JPEG files – a superb selection. When browsing for files to play, it can get frustrating not being able to search by keyword or scroll down the list of tracks more quickly, particularly if you have hundreds of songs stored on your hard drive. 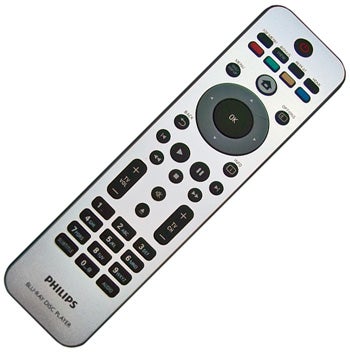 That aside, the deck’s onscreen menus are terrific. There’s a clean, stylised simplicity to their design that’ll play well with anyone coming to Blu-ray for the first time. The Home menu labels its options by activity (‘play disc’, ‘browse USB’ and so on), each one denoted by a large, instantly recognisable icon.


The Setup menu is clearly laid out, using chunky text and a logical submenu arrangement. It even displays descriptions of each option when you hover on it for a few seconds. Here you can choose the aspect ratio, which includes a 21:9 setting for Philips’ Cinema 21:9 TVs; pick from a bunch of picture presets (Vivid, Cool, Action, Animation) and select Neo:6 processing to turn stereo sound into virtual surround. All of the network settings and setup wizards are easy to find and to follow, while 3D settings amount to a selection of ‘Auto’ or ‘Off’. The deck will also output at 1080/24p and output HD audio formats in PCM or as a raw bitstream.


Controlling these menus with the remote is easy. This comfortably-sized zapper features a logical arrangement of rubbery buttons, which benefit from clear labelling, while the silver finish makes it attractive as well as practical.


The BDP7500 takes just a few seconds to boot up and disc loading is fast. ”Terminator Salvation” loaded up in around 45 seconds, while some other discs took closer to 35. Excellent work.

We were highly impressed by the original BDP7500’s 2D picture quality, so it follows that the Mk II version delivers similarly eye-catching images. As before, there’s bucket-loads of detail in the picture, sumptuous blacks and gorgeous colour reproduction, boosted by the on-board CinemaPerfect HD engine.


What we weren’t prepared for, however, is how good its 3D pictures would be. After hooking the deck up to a Sony 60in LED set, we watched a range of trailers on a Philips 3D demo disc and the BDP7500 displays them with absorbing depth and sizzling sharpness.


With the trailer for ”Alice In Wonderland”, the Philips reproduces the wacky characters, layered objects and densely detailed backgrounds with effortless clarity and tracks movement without judder or motion blur. This crisply focused picture helps your eyes digest the 3D effect and draws you deeper into the picture.

Impressively, there’s very little crosstalk or other artefacts to speak of, a finding backed up by its reproduction of the Golden Gate Bridge scene in ”Monsters Vs Aliens”. Where some 3D systems have reproduced the bridge’s cables and uprights with a clear ghosting effect to the side of the object’s edge, here the lines are cleaner and better defined. There is a faint ghosting effect but it doesn’t disrupt your enjoyment, and probably has more to do with the TV’s 3D processing anyway.


And throughout ”Monsters Vs Aliens”, the picture boasts stunningly crisp detail, smooth movement and the sort of depth and richness that makes 3D so appealing. It loses the wow factor occasionally when there’s too much going on in the foreground – the scientist batting a ball, or the characters thrusting swords towards the camera in the ”Alice In Wonderland” trailer are difficult to process – but on the whole the deck’s 3D performance is excellent. If pushed, we’d say that Panasonic’s DMP-BDT100 edges it on picture quality, but the differences are marginal and largely dependent on what TV you’re using.


Next we ran through the tests on the Silicon Optix HQV Blu-ray disc, and in terms of video processing the BDP7500 clearly knows its onions. There isn’t a trace of stepping on the Jaggies test, the Film and Video Resolution test cards look clean as a whistle (with only a momentary flicker on the former) while the pan across Raymond James Stadium is smooth and devoid of artefacts.


Movies on DVD look decent enough when upscaled to 1080p, and sonically the Philips doesn’t put a foot wrong through its multichannel analogue outputs. Dolby TrueHD and DTS HD Master Audio soundtracks are as clear, crisp and expansive as they are when piped to a receiver as a bitstream, while stereo music playback is fuller bodied and more refined than some similarly priced players we’ve auditioned.


The BDP7500 Mk II takes a winning formula and makes it even better by throwing 3D compatibility into the mix. Both its 3D and 2D pictures are excellent, and with the addition of Wi-Fi support plus an impressive range of other features, the BDP7500 is now one of the best Blu-ray players on the market. And that’s before we’ve even mentioned its slick operating system and its external design, which is simply beautiful.


The only things preventing us from holding it in quite the same regard as the LG BD570, Sony BDP-S570 and Samsung BD-C6900 is the lack of built-in Wi-Fi, which means you need to fork out for a costly USB dongle, plus Net TV’s range of services can’t quite match the quality of Sony’s Bravia Internet Video.