Blu-ray players have come on in leaps and bounds over the past year, introducing us to the wonders of Full HD 3D, wireless media streaming and web widgets. But Philips has always been a few steps behind the Japanese and Koreans in terms of innovation, and as such hasn’t yet dipped its toe in cutting-edge waters. Instead it focuses on producing stylish, no-nonsense decks for people who simply want high-quality Blu-ray playback, not a bevy of beguiling features.

The BDP3100 continues in the same vein, but then that’s hardly surprising given its amazingly low price tag and entry-level positioning. And although the spec sheet is modest compared with the Samsung BD-C6900 or Panasonic DMP-BDT300, it does tick all the boxes on the Blu-ray essentials checklist.


It’s also a very attractive and beautifully built player, which you simply wouldn’t expect for this sort of money. The instant you pluck it from the packaging you can feel the quality – for starters it’s fairly heavy for a budget deck and the casing is made from a lightly textured aluminium. What’s more, the curved edges and glinting black fascia give it a suave modernity that only Samsung’s players can match.

On the back, the range of connections is par for the course, but should suffice for straightforward setups. The HDMI output is central to its hi-def talents, outputting video in 1080/24p for the purest Blu-ray playback as well as 1080p, 1080i and 720p for upscaling DVDs to pseudo HD. You can, however, select the Auto or Native options in the setup menu and let the player select the appropriate output for your TV.


The BDP3100 is a Profile 2.0 player and an Ethernet port is provided for BD Live access, but that’s the only way you can connect to the Internet. There’s no Wi-Fi, either built-in or via USB adapter, and there’s no network streaming either. 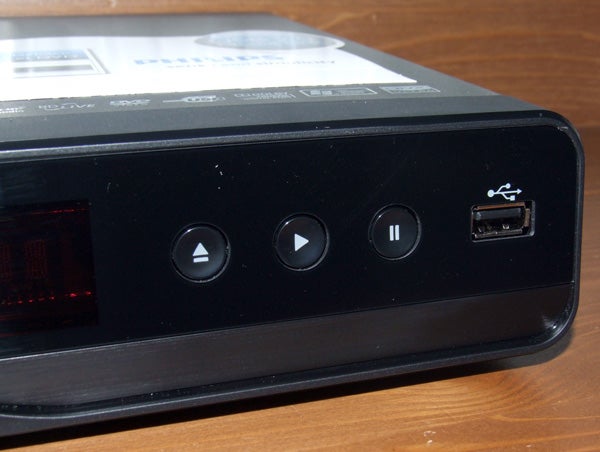 You also won’t find any built-in memory for BD Live downloads, but this can be added by plugging a USB device into the back of the player. A second USB port is generously provided on the front for media playback. Completing the socket line-up are component, composite, coaxial digital and analogue stereo outputs.


The BDP3100’s digital media support is impressive. It’ll play DivX Ultra, MP3, WMA, XviD, JPEG, AVCHD and WMV from USB sticks, card readers and discs, although with the latter it’s a little fussy about which version you use – it played a WMV HD file with pictures but no sound, for instance, then refused to play another of our files completely. The lack of DivX HD and MKV support is a pity but not a deal-breaker at this price.

Controlling the deck is a doddle thanks to the excellent remote, which has been stripped right down to the bare essentials. Key to its success are the menu controls – a grey rubber ring with a big ‘OK’ button in the centre – which are satisfying to press and receive an instant response from the menu cursor.


To complement the foolproof remote, Philips has made the onscreen displays as simple as possible. The Home menu, for example, sports just three options – Play Disc, Browse USB and Setup – illustrated by chunky white icons that dominate the screen. Granted, the lack of complex features is an advantage when trying to keep menus nice and streamlined, but as operating systems go this is one of the easiest to use. 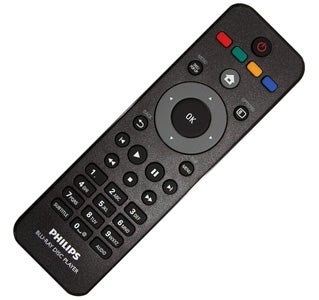 This continues into the setup menu, which fills the screen and lists the options in a clear fashion (scrolling left to right). It even provides a brief explanation of each one if you hover on it for long enough. During playback, the Options menu puts all of the commonly-used features in a small box, which stops you having to enter the setup menu and potentially losing your place in the movie.


The Philips’ start-up time is fairly quick, taking around 20 seconds to get from standby to the Home menu, and disc loading time is better than expected – it reached ”Terminator Salvation’s” Sony Pictures logo in 40 seconds, which is actually quicker than the Samsung BD-C6900.

As well as being a speedy operator, the BDP3100 is also a terrific picture performer. Of course, if you’re feeding pictures to a Full HD TV over HDMI at 1080/24p, it’ll transfer whatever’s on the disc directly to your display. Therefore its reproduction of ”I Am Legend” is incredibly sharp, stable and vibrant, with no noise or degradation. The opening shots of New York are richly detailed with edges that look clean as a whistle, while the expansive contrast range produces devilishly deep blacks and Ariel advert whites.


It also handles the Silicon Optix HQV Blu-ray with assuredness. There are no jaggies on the rotating bars and the tricky film and video cadences are handled without artefacts.


However, the DVD version of ”Avatar” looks quite disappointing when upscaled to 1080p, beset by smeary mosquito noise, soft edges and jaggies on diagonal lines that reduce the impact of Pandora’s lavish colour and detail. Perhaps it’s just because we’ve got used to the crisp Blu-ray version, but we’ve seen this disc look better. The Silicon Optix HQV DVD also backs this up, with some jaggies on diagonal lines and softness in the Detail tests.


Sonically the BDP3100 assumes the role of CD player very well, injecting music with enough detail, warmth and rhythm to satisfy the demands of modest sound systems, while its handling of movie soundtracks via HDMI is faultless.


The BDP3100 might be light on cutting-edge features, but at around £120 it’s the ideal deck for those on a tight budget looking to take their first tentative steps into the world of Blu-ray. Hi-def picture quality is top-notch, it’s easy to use and loads discs quickly, plus Philips’ eye for design will go down well with style-conscious buyers.