What is the Philips BDM4037UW?

The Philips BDM4037UW is a massive 40-inch monitor with a whopping 3840 x 2160 (4K) resolution. Its LCD panel is also curved and mounted on a slender metal base, while its impressive 4000:1 contrast ratio should make it fantastic for watching video.

All told, it should be ideal for those seeking a stylish looking monitor that can provide a massive desktop workspace without having to resort to multiple screens, and also performs double duty as a respectable TV as well.

Philips has some history when it comes to great looking monitors – I was also impressed by the BDM3490UC. The BDM4037UW continues this tradition: this enormous 40-inch panel is surprisingly slim and sits on an astonishingly slender metal stand.

The aluminium finish of the stand is continued round the impressively slim and low-profile bezel of the screen, while the rear has a nicely contrasting glossy white finish. Add in the gentle curve of the display and, altogether, it puts this display on an equal footing with many designer TVs, and far surpasses the majority of more mundane looking monitors. 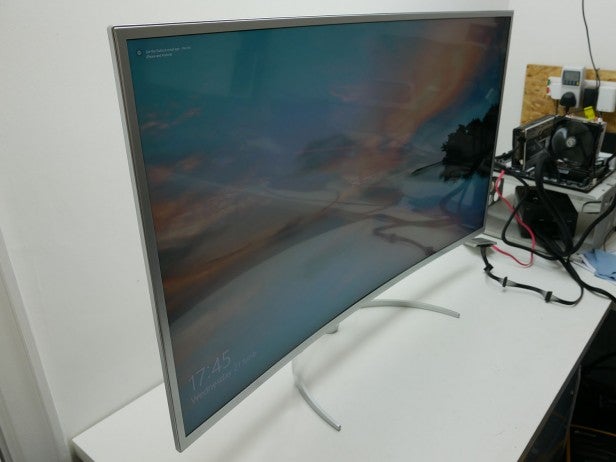 The downside is you do miss out on some of the more practical extras that some monitors provide. In particular, you can’t adjust the position of the display in any way other than a bit of back-and-forth tilt.

Normally this is a key consideration as having height adjustment is of particular importance for minimising neck strain – you should raise the top of your monitor so that it’s level with your eyes. However, this display is so large already that its top edge will likely sit higher than most people’s eyes as it is.

Nonetheless, the lack of rotation and pivot in the display makes it a little less convenient to move around and plug cables in.

Otherwise this display wants for little. It boasts two DisplayPorts, an HDMI 1.4 and an HDMI 2.0, plus there’s a four-port USB 3.0 hub. All the connections are round the back and stick straight out. This means cable tidying is a trickier, but does make the sockets easier to see. 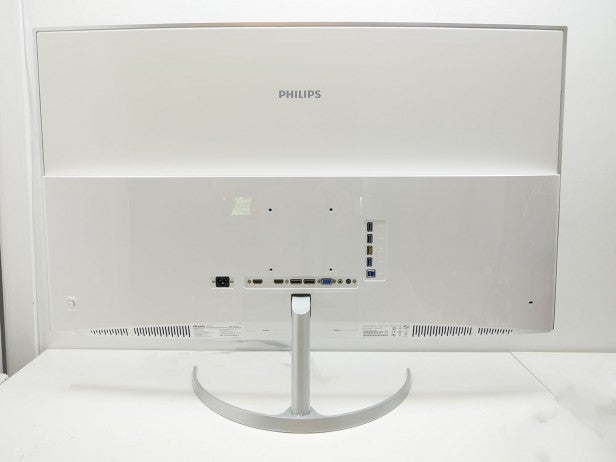 When it comes to the panel on this display, it offers an interesting selection of features. The VA LCD technology it uses is crucial in allowing it to offer a contrast ratio of 4000:1 – that’s four times what a typical IPS or TN panel offers. This makes the display potentially ideal for watching video, as having deep-looking blacks and other dark colours is ideal for the moody lighting used in many films.

On the flipside, you only get a maximum brightness of 300nits, which makes this display less suited to use in bright environments. Plus, even though Philips claims a fairly snappy 4ms response time, VA panels tend to be the slowest of all LCD panel types so twitchy PC gaming won’t be this display’s strong suit. Especially as the display lacks Freesync for silky smooth gameplay.

As befits its near-TV status, you do get built-in speakers on this monitor, but they’re rubbish. Tinny and with a low maximum volume, they might be better than those on the very cheapest TVs but you’ll want external speakers for satisfying sound.

The BDM4037UW arrives in two pieces, with the base detached from the monitor. It affixes via a single bolt that, somewhat concerningly, isn’t tethered so it could get lost quite easily. Otherwise, physical setup is a breeze. Just be careful you don’t let the base get near the edge of your desk; its slim profile means it will over balance even if only a tiny portion of the stand isn’t sat firmly on the desk.

As for setting up the screen’s picture, things weren’t helped by the little joystick on the back of the display that’s used to control the onscreen display (OSD) being damaged. This made navigating the menus more cumbersome than it should’ve been, but having experienced other joystick-controlled monitor OSDs, I’m sure under normal circumstances it does a fine job.

Otherwise, the system works well enough. The menus are reasonably well laid out and offer plenty of image adjustments. Particularly useful are the plentiful colour temperature options that quickly allow you to tweak the overall tone of the display. 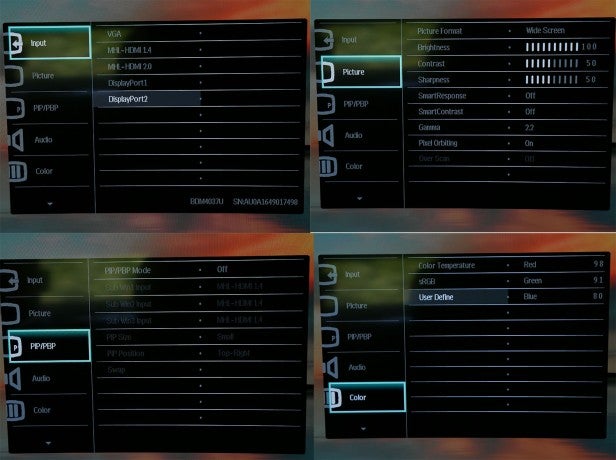 There’s little in the way of extra features except for picture-in-picture and picture-by-picture modes. Normally these are niche extras, but on a display this size they’re of more use than usual. The former can work with two inputs while the latter can show two or four sources at once.

As for setting up Windows to work with such a massive screen and resolution, well this is where the BDM4037UW really comes into its own. So many 4K screens, or large monitors, either result in pixels that are too big and blocky-looking or too small that you need to use Windows scaling settings to make things readable.

Here, though, the balance is just right. You can use this display at its native resolution and enjoy every pixel in all its glory, without having to squint.