What is the Philips Avance HR1922 centrifugal juicer?

The Philips Avance HR1922 is a high-end centrifugal juicer. It sits within the upmarket Avance range – which also includes the highly rated Philips Avance MicroMasticating Juicer HR1947 – versus the more affordable and less powerful Viva Collection.

With a 1200W motor, the Avance HR1922 is an update of the previously available 1000W Avance HR1918. While it comes with a hefty-ish price tag, it’s a cleverly designed juicer with plenty to offer. 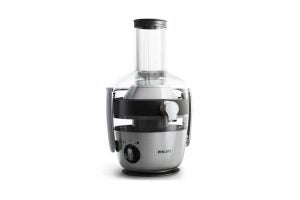 The first thing you’ll notice about the Avance HR1922 is its compact form. This juicer has clearly been designed with appearance in mind. While many juicers consist of two integral but separate parts, the juicing unit and the pulp bin, Philips has built the pulp bin into the main body of the juicer.

Setting up this juicer, I wondered how much it could fit. The answer is more than enough. At 2.1 litres, the pulp container isn’t the biggest on the market, but it’s plenty big enough, with Philips claiming you can juice up to 3 litres before having to empty it. If anything, you’ll have to get another jug first, since the standard jug can accommodate only 1 litre of juice. 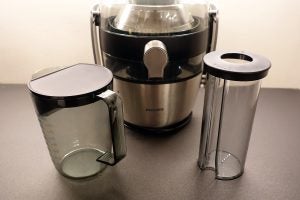 In addition to its compact size, taking up 296 x 250mm of your worktop space (without the jug attached), the Avance HR1922 looks pleasantly futuristic. The juicer’s shape is reminiscent of a large curvy bottle, further helped by the fact that most of its removable juicing parts are made of transparent plastic.

But don’t be fooled by the silhouette: this machine is sturdy and has a non-slip bottom. Meanwhile, the groove at the black plastic base is for cord storage – a handy solution.

The main body, the locking arm and the detachable spout are all made of brushed stainless steel, while the juice collector is black plastic. The spout can be rotated 120 degrees to prevent dripping after juicing. 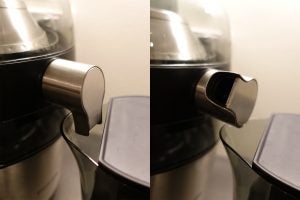 The transparent plastic jug has millilitre and liquid ounce measurements, and comes with a black plastic foam separator lid.

The feed chute is 8cm in diameter, which is wide enough not to require much preparatory chopping. The transparent plunger, feed tube and juicer lid enable you to observe the entire juicing process. Even the pulp bin is transparent, meaning you can assess its fullness without disassembling the machine.

There’s no on/off switch. By default, the speed control dial is in position “0”, which somewhat strangely turns towards setting “1” on the left and setting “2” on the right. For safety reasons, the dial will not work when the locking arm is disengaged. When changing settings, the dial is relatively stiff, but this helps you avoid turning it by accident.

Interestingly, the two speed settings available here don’t apply to different types of fruit and veg. Instead, setting “1” gives you clear juice, while the slightly noisier and more powerful setting “2” offers juice with up to 50% extra fibre.

The juicer comes with a small colourful recipe booklet, which also points you towards a free healthy drinks app. 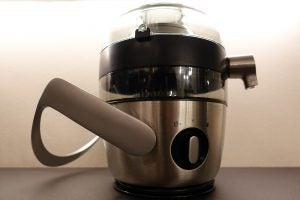 Philips Avance HR1922 centrifugal juicer – What’s it like to use?

While I was busy admiring the compact design and the little details that the Avance HR1922 gets right (the drip-stop spout, the cord storage, the spotless clean-up – I can go on), it also managed to deliver some outstanding juice.

I started by making a double portion of the Farmers’ Market juice from the recipe booklet, which contains strawberries, apples, carrots and some cucumber.

A bit of pressure was needed to juice the carrots and apples, especially when half of an apple ended up core side down. Two-thirds of a large cucumber made the juicer wobble a little, but it was sturdy enough to take it. The resulting juice was fibrous and tasty. 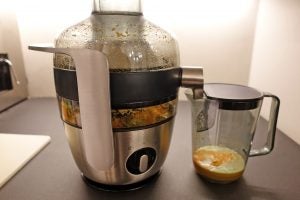 Gentle pressure was also required when juicing beetroots, oranges and pomegranate seeds. Nevertheless, the juicer doesn’t have a problem with processing hard veg. If anything, juicing whole oranges required more squeezing than beetroots. For smaller bits, such as pomegranate seeds, the plunger helps to stop the seeds from flying back out.

To test the difference between the two speed settings, I decided to juice a similar amount of apple and carrot. It became apparent that setting 2 yielded significantly more juice, also producing more substantial froth.

While setting 1 produced relatively clear juice with lighter foam, setting 2 resulted in a creamier, almost smoothie-like juice (if one could imagine a smoothie made out of apples and carrots) with a more intense flavour. 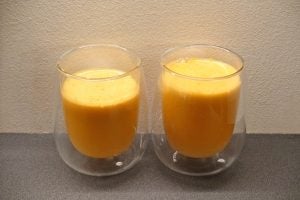 Leafy greens proved more challenging, with the juicer delivering barely over 60ml from 200g of spinach leaves at setting 1. Kale was even trickier, with 100g yielding just 20ml juice.

While these amounts were sufficient in the context of the recipes, something about kale proved unnerving enough for the juicer to begin wobbling almost uncontrollably. Although for testing I normally use the most widely available sliced variety of kale, I decided to also test the Avance HR1922 with larger kale leaves.

This proved slightly better, resulting in double the yield, but there was still an episode of wobbling. In fact, I had to turn the machine off and on again before it settled. As recommended in the instructions, I alternated juicing leafy greens with hard fruits, processing apples in-between. Although the resulting juice was clear of any kale stalks, I found some apple peel in there – a further sign of the disturbance caused. 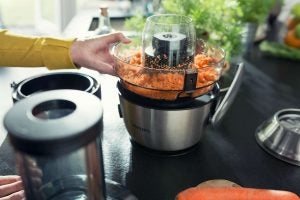 Cleaning the Avance HR1922 is made easy because of the pre-clean rinsing function. By pouring water into the hollow plunger and turning the juicer on setting 2, you can rinse out the juicer lid, the steel blades and the micro-mesh filter.

There’s very little chance of any spillage occurring while cleaning, whether you choose to remove the juicer parts separately, or all at once as recommended in the instructions. Just bear in mind the latter would involve all the pulp ending up in your sink – which isn’t ideal if you don’t have a garbage disposal unit.

The pre-clean function is a definite strength of the Avance HR1922, since most juicers tend to get large amounts of pulp stuck in the lid, making it difficult to remove without spilling pulp everywhere.

The Avance HR1922 is also dishwasher-safe – although after the pre-clean rinse you’ll unlikely need to use it. 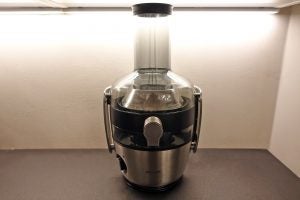 The Philips Avance HR1922 isn’t cheap, but it has several clever touches that make it stand out from the competition. If you care about appearance and storage, or easy cleaning, you’d be hard-pushed to find anything better.

However, if you’re particularly interested in juicing leafy greens, you’d be better off with the Philips Avance MicroMasticating Juicer HR1947. And for those looking for more frills, the similarly priced Sage Nutri Juicer Plus comes with a puree extractor, while the Panasonic MJ-L500 Slow Juicer has a frozen dessert function.