Whether you loved it or loathed it, one thing you certainly couldn’t do with Philips’ debut Aurea TV was ignore it. For the way its bezel used a sophisticated array of LED light sources to provide a luminous, multi-coloured frame around its pictures was as outrageous as it was unique, making it a must-have background item for any self-respecting daytime TV show, and a consistent ‘stand out’ product at technology shows the world over.


There were only two big problems with the original Aurea from our point of view: its relatively high cost, and the fact that it seemed to be the televisual equivalent of Marmite, with people either being drawn to it like moths to a flame, or repelled by it as if it was some sort of TV antichrist. 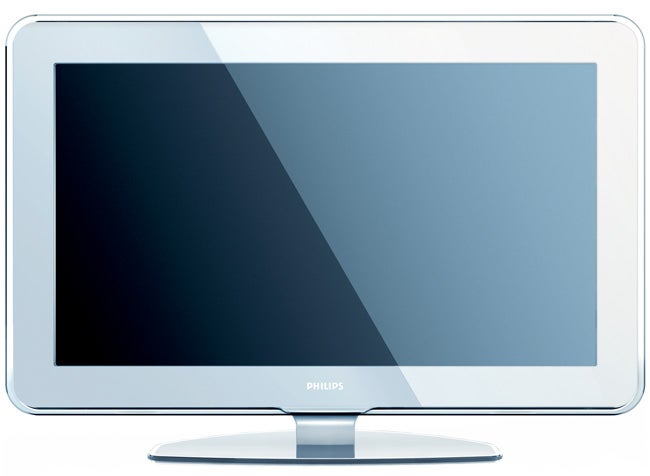 Happily the second generation of Aurea TV, the 42in 42PFL9903, has a stab at tackling both of these original Aurea objections. Its price of £2,500, while certainly not cheap, is at least a few hundred pounds cheaper than its predecessor. And the new design Philips has created for the 42PFL9903 is a really striking improvement over the original Aurea, making it much easier to tempt people into the ‘love’ rather than ‘hate’ camp.


For starters, the light frame bezel looks much slinkier and cool thanks to the application of a full sheet of glass that uniformly covers both it and the screen. Second, the set now benefits from the chic transparent ‘shroud’ effect curving forward around the TV’s edges that’s so illuminated Philips’ other 9 Series models.


Next, Philips has considerably toned down the impact of the little 1.5cm or so ‘strip’ that runs directly around the image just before the light frame starts. This inner frame was pretty much black on the original Aurea and so made a significant barrier between the picture and the supposedly complementary light frame. On the new Aurea, by comparison, this inner frame is almost white, and so creates much less of a distraction.

The extra aesthetic glories of Aurea Mark II are raised even further when you actually turn the TV on. For as well as that new inner frame proving much less distracting once the light frame starts glowing away, it’s also immediately apparent that the new Light Frame’s effect is much more sophisticated than that of its predecessor, for two main reasons.


We’ll come to the second reason later, but first, the latest Light Frame contains more LED light sources than the original Aurea Light Frame; 150 versus 128. This enables the new light frame to deliver more localised subtleties and differences in its colours than the original one – and it’s remarkable just how striking a difference this extra flexibility makes.

For while the way the light frame responded to colours in an image with the original Aurea was dazzling and clever, here it becomes so accurate it’s frankly uncanny. And in the process of redefining the precision with which parts of the light frame’s colours tally up with the colours in the image you’re watching, Aurea II makes the Light Frame effect appear much more natural and engaging.


In fact, whereas with the original Aurea I experienced a couple of days of resistance to the Light Frame effect before finally embracing it, with Aurea II I found myself loving the concept right from the get-go. 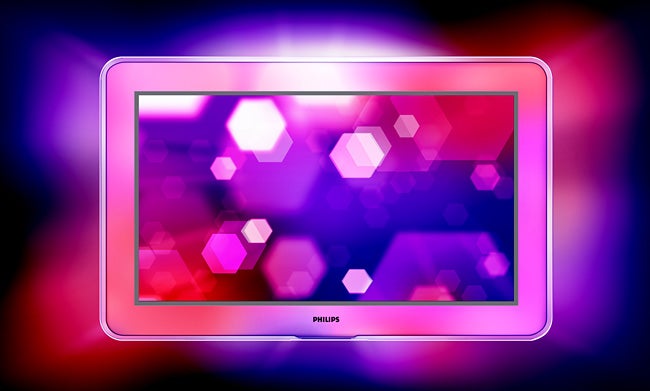 Trying to describe just how endlessly subtle and precise the new light frame effect is brings to mind the old saying that ‘a picture can say a thousand words’. For seriously, if I were to try and outline here the precise location of every colour tone and colour intensity shift the frame portrays to back up a typical TV image, I’d be having to write hundreds of words.


What’s more, those words would probably start to sound pretty dry and boring by the end, whereas if there’s one thing the Light Frame effect certainly is not, it’s dry and boring. So all I can say is, look at some of the pictures accompanying this review, and imagine the drama of the effect shown happening ‘on the fly’, as the light frame continually and instantly changes in response to the content of the image you’re watching. Better still, try and see an Aurea II in action for yourself. Be careful, though; once you’ve seen the latest Light Frame strut its stuff, you may no longer be able to live with the relative drabness of your current TV…

If you’ve got a good memory(!), you might remember that I said there were two reasons why the new Light Frame technology used by Aurea II is better than that used by the original Aurea. And the second reason is that the new Aurea approach brings much more precise frame colour matching to the table.


In other words, Philips has improved the light frame’s colour reproduction to the point where it can produce shades much more tonally consistent with the content of pictures. This perhaps doesn’t sound such a big deal when you just write it down like that, but believe me when I say that it actually has a profound impact, enabling the frame to forge a much closer bond with the image – and thus with you – than was the case before. 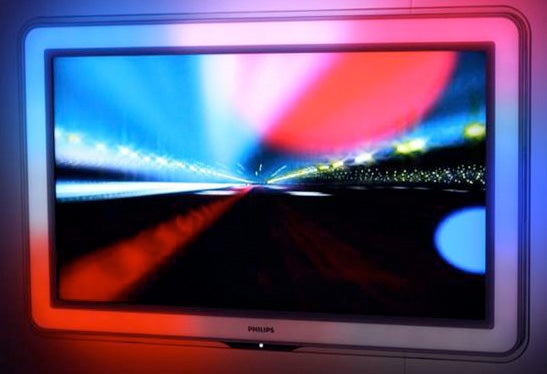 I should add at this point that the 42PFL9903 has LED lights on its rear as well as around its bezel, so that pools of immersive coloured light – dubbed a ‘sensorial halo’! – also spill across the wall behind the TV. This means that in an ideal world you’ll be able to stand the TV in front of a white wall, or even hang the TV from a white wall to best appreciate everything the TV has to offer. But if this isn’t possible in your home, then at least you still get the impact of the forward-firing light frame – something you wouldn’t get with a standard Philips Ambilight set, where the coloured light only comes out of the TV’s rear sides.


Having established that the 42PFL9903’s Light Frame/Ambilight Spectra system is far more accomplished than that of the previous Aurea model, it’s nice to find, too, that the new set is impressively loaded with other features. The set’s connectivity, for instance, includes four HDMIs, a DLNA-certified Ethernet jack so that you can access MP3, .alb slideshow, JPEG, and MPEG1/2 movie files on your PC and home network, plus a USB jack for playing the same sort of multimedia files from USB storage devices.

It’s also good to find the 42PFL9903 sporting not only a Full HD resolution and a Wide Colour Gamut backlight system, but also Philips’ Perfect Pixel Engine HD image processing engine – the same key technology that recently made the Philips 42PFL9703D such a winner.


Fine detail levels are absolutely outstanding with standard and high definition sources alike, for instance, and the image is extremely bright. Also, motion is superbly handled thanks to the TV’s 100Hz Natural Motion processing, and colours are luxuriously rich and vibrant. Plus, of course, colours gain an extra boost thanks to their reinforcement by the whole Ambilight Spectra/Light Frame situation.

That’s not the only positive thing the Light Frame brings to the 42PFL9903D’s picture quality either. For the vibrancy of the light frame has the cunning effect of seeming to exaggerate the TV’s black level depths, making the image look more contrasty than it would otherwise.


To some extent I guess this is just an optical illusion; the reality is that the black level response of the 42PFL9903’s core panel is only marginally if any deeper than that of the fractionally disappointing 47PFL9603D we reviewed last week. But as optical illusions go, it’s a cracker!


As usual where dealing with the Perfect Pixel Engine, I need to stress that it is possible to really muck pictures up if you’re not careful with some of the huge amount of image tweaks available from the TV’s menus. For instance, if you leave the HD Natural Motion tool set too high, it can cause twitching noise and even, occasionally, a phenomenon during sports where you see three balls instead of one. In fact, you’re probably best leaving it set to Low for most movie and TV viewing, and possibly deactivate it completely during sports viewing. 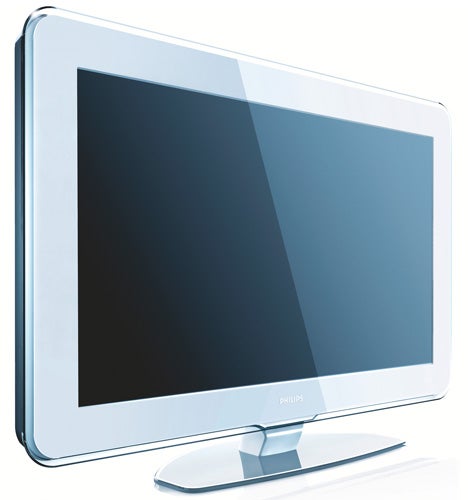 Leaving the set’s noise reduction routines can make pictures look softer than they need to as well, especially during HD viewing. But provided you’re willing to revisit the 42PFL9903’s on screen menus to tackle potential issues more regularly than you would with a more basic TV, it will still reward you for the vast majority of the time with a really outstanding picture given added impact by the sheer drama of the Light Frame system.


It would have been easy for Philips to have forgotten about audio in its drive to raise its Aurea game. But in fact the 42PFL9903’s sound is very good indeed, delivering bags of distortion-free power and a striking dynamic range – thanks in no small part to the presence of two subwoofers on the TV’s rear.


But nobody can deny the immense quality of the 42PFL9903’s core AV performance, and I, for one, love the Aurea Light Frame effect to bits. After all, contrary to what naysayers might tell you, I believe it really does enhance your viewing experience in a unique way, and I’m all in favour of anything that does that – even if the unique improvement does come at a price.