What is the Philips Android TV?

Regular readers will know that while Philips TVs in 2013 impressed in many areas, they consistently lagged behind the competition when it came Smart features. Neither their clunky, slow interfaces nor their limited content levels bore comparison with the much richer, slicker Smart offerings of LG, Samsung, Sony or Panasonic. Realising this, Philips (TP Vision) has come up with what’s looking like a pretty inspired solution: making some of its 2014 TVs Android compatible. 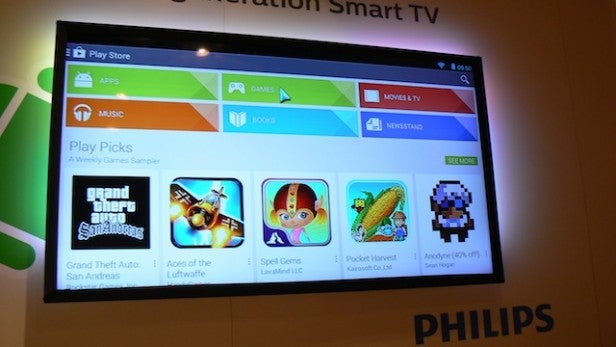 To find out more about this unexpected development we visited TP Vision’s rooms in Las Vegas’s Venetian hotel during the current CES, where we were shown the sort of things we can expect once Philips Android TVs start to appear (likely in the 2nd quarter).

The first key point is that the Android TV platform has been added to Philips’ existing Smart TV offering rather than replacing it, so you can still enjoy the extra TV-friendly interface advantages of those (few!) apps that have been previously developed specifically for Philips’ own Smart TV service. This makes sense because if Android has a disadvantage in a TV context, it’s that it has been designed first and foremost for smartphones and tablets, not TVs.

The main menu for Philips’ new Smart system now opens over the top of a full-screen version of the picture you were watching when you hit the Home button on the remote, rather than the picture reducing to a small box as happened last year.

Also new is a simple tool bar along the top of the screen providing access to a new series of hubs, including the listings-based ‘Now on TV’ screen; an On-Demand section; an Apps collection; and a Recommendations section where the TV presents a scrolling list of TV shows on now or in the upcoming hour that it thinks you might be interested in based on your viewing history. 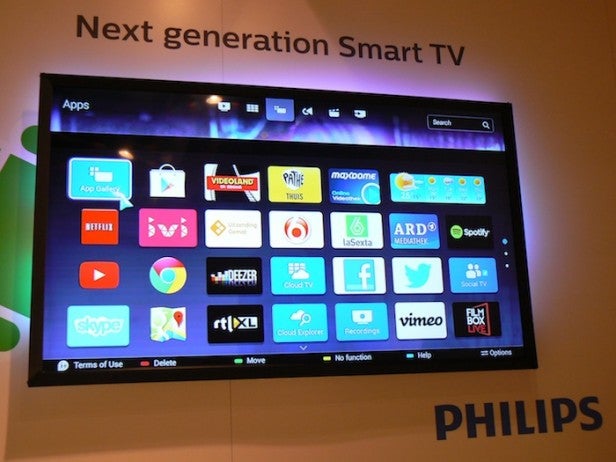 The recommendations system also works for Video on Demand content, and in both cases the presentation of the recommended content lists is streets ahead of the dour look of last year’s Philips interface, with extensive use of large ‘box art’ graphics for all the listed content.

It’s when you head into the Apps menu, though, that the scale of the leap Philips is making with its Android TVs really becomes clear – for here you will find a Google Play Store icon. And selecting this takes you right into the exactly the same Google Store environment you’d see on your mobile phone or tablet.

At this point you suddenly remember how the Android platform gives you access to, well, pretty much everything. Or at least a collection of literally thousands of apps including games, video services, and information tools. And with the Android TV, you can access almost all of them. 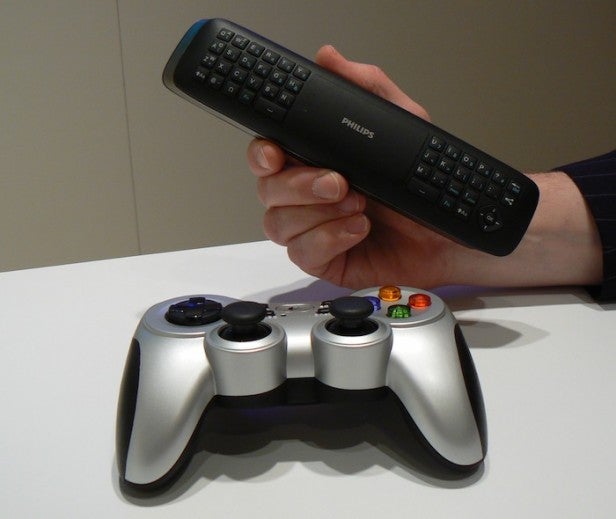 Why only ‘almost’? Because the Android TV does not feature a touch screen, and so won’t work with apps that flag themselves up as absolutely requiring a touch screen interface.

Such apps are at least filtered out by the TV before it populates the Play store content lists though, so there shouldn’t be too much chance of you downloading an app only to find it won’t work in your Android TV environment.

The set is compatible with some joysticks too – we played a racing game with a wireless Logitech controller – or you can just use Philips’ new remote control for most of the apps.

This remote has a couple of handy new elements. The full QWERTY keyboard on its rear has now added a cursor control and ‘share’ key, and you can now use the handset in ‘point and click’ mode, which for us is currently the most intuitive way of navigating Smart TV menus. 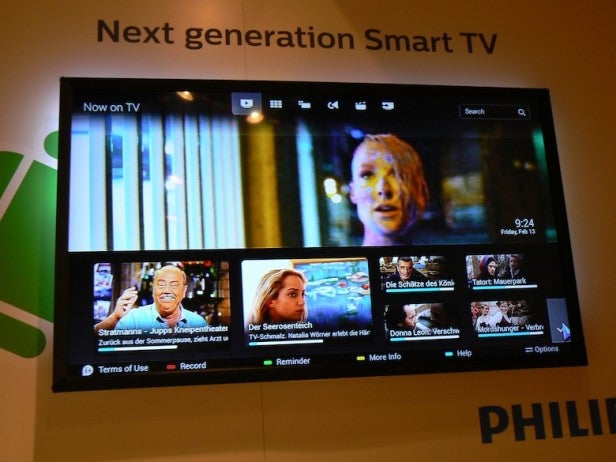 There’s a little mic on the new remote as well, with which you can use your voice to input search terms into the TV’s search fields.

Once you’ve downloaded apps from Play they simply populate the TV’s Apps hub alongside the apps you’ve got via Philips’ own online system. There aren’t separate ‘folders’ for apps from different sources. Which is actually fine with us, as it makes the Android TV system feel more integrated into the wider Philips user experience.

There were times during our time with Philips’ Android TV where the fact that the Android menus certainly haven’t been designed with TVs in mind felt frustratingly clear. Though to be fair, the frequent scrolling you have to do is at least rendered reasonably pain-free by the fact that unlike Philips’ previous, sometimes painfully sluggish Smart TV interface, the new Android platform seems to run both very stably and speedily, with no serious loading delays or snail-like processing.

There are areas where Philips could improve functionality – for instance, we’d welcome a personalised element to the recommendations system, where different users can have different ‘learning’ accounts. There seems to be much more scope for the Philips’ My Remote app to offer more functionality with the Android on-TV interface than it currently does too, and we’re concerned that the 2.7GB of built-in memory space reserved for storing apps won’t be enough for some users. Especially as DRM issues mean you can’t expand this storage with, say, a USB drive.

Then there’s the sense that the vast majority of the apps available via Play have little to no value in a TV environment, leaving users having to navigate through reams of rubbish to get to the good stuff.

Overall, though, Philips’ decision to embrace Android for initially its upper-tier TVs but from 2015 the majority of its range seems like a hugely sensible move. After all, it more or less overnight raises the brand from being a non-entity in Smart TV terms to being one of the smart TV world’s most content-rich players.