In my time I’ve seen some pretty strange ideas at bringing gamers closer to the action, ranging from 3D displays to rumble vests to VR headsets. For a while, however, I’ve been following Philips’ plans in the area with interest. As a concept and a product, amBX presents us such an ambitious, all-encompassing approach to making games come alive that it’s hard to tell whether it’s genius or madness. Your eyes get ambient lighting to build atmosphere. Your ears get 2.1-surround sound. For touch, how about a vibrating wrist-pad and a pair of fans that blow air in your face? Those in the know tell me that smell is the next amBX target, and how long do you think it will be before those inspired/crazed chaps on the development team come up with something to handle taste? 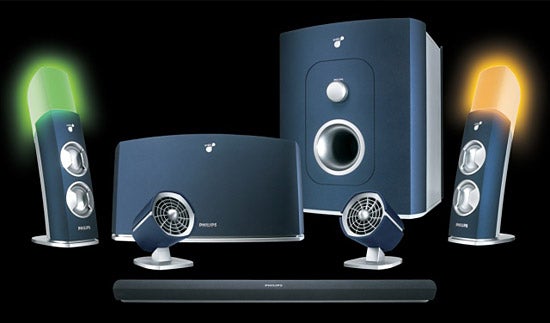 Those of you who follow our TV reviews will be aware that amBX has a close cousin in Philip’s Ambilight – where two to four sides of the TV frame emit a soft, coloured glow that’s designed to blend the image in with surroundings and create a more immersive viewing experience. This provides the basis for the simplest form of amBX – the Starter Kit (from £90) – which consists of a pair of satellite speakers with LED-based lamps built in to the top and a control unit with its own ‘wall washer’. This is a bank of lights that ‘washes’ the wall behind your monitor with a multi-coloured ambient glow. To this, the ProGamer kit (from £123) adds a subwoofer, while the Premium kit reviewed here adds a vibrating keyboard wrist pad and two variable-speed fans with a maximum spin rate of 5000RPM. The latter items can be added to the Starter or ProGamer kits for an extra £50 or so, meaning that if you like the sound of amBX you can start off small and then upgrade. 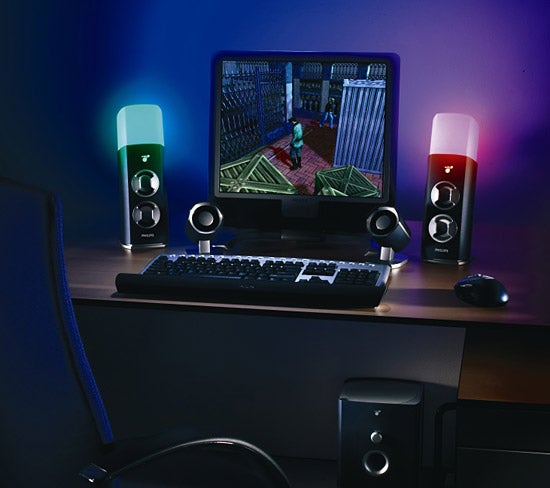 Why would you want to do so? Well, as with ambilight, the lamps are designed to create a soft, atmospheric glow that extends the action on the screen out into the area around your desktop. The lamp technology offers a wide range of colour tones and the different lamps can use entirely different hues, meaning that if you have a gloomy, green-lit dungeon wall on the left and a crackling fire on the right the lamps can graduate from green to a pulsing yellow between the left and right speaker lamps. As is the case with ambilight, this can be a subtle but effective addition – and even more when game developers produce titles that control ambilight directly (more on this later). The wrist pad, meanwhile, does exactly what you might expect: rumbling when you fire a gun, or when tank wheels rumble near your position, or vibrating like the clappers when something explodes. The fans, finally, create long or short blasts of air, hurling a hefty breeze in your face when you’re in the seat of an open-topped sports car or giving you a quick shot when a grenade goes off near by.

I know it all sounds crazy, but it actually works better than you might think – depending, of course, on how effectively amBX works with the game of your choice. The issue here is how games are supported. They can be developed specifically with amBX in mind, in which case code is embedded that tells the lamps, fans and wrist pad what to do. They can also be modded afterwards with amBX specific patches, in which case the same applies. Finally, they can be supported by amBX through the special FXGen applet, which analyses the graphics and audio data and uses that as a basis to create relevant amBX effects.

FXGen doesn’t support every game – you can check out the supported titles over at www.amBX.com – but it does support a decent selection including Crysis, Mass Effect, Age of Conan and The Elder Scrolls IV: Oblivion. The problem is that the degree of support varies greatly from title to title. To get the measure of amBX’s potential I tried a few fully supported titles, including the slightly venerable TOCA Race Driver 3 and Defcon, which were included in the Premium bundle, plus Quake 4 (modded for amBX).


TOCA gave me a pretty good introduction. The first surprise is how good the 2.1 speaker setup is. The sound is meaty and powerful, with the sort of pumping bass response that, while not ideal for all types of music, is perfect for high-octane gaming. In TOCA, the glow of the lamps mainly reflects the colour of the sky or immediate scenery, meaning there’s an awful lot of blue, but at the start of the race they glow red then green for the starting lights, which adds a little to the pre-race build up. 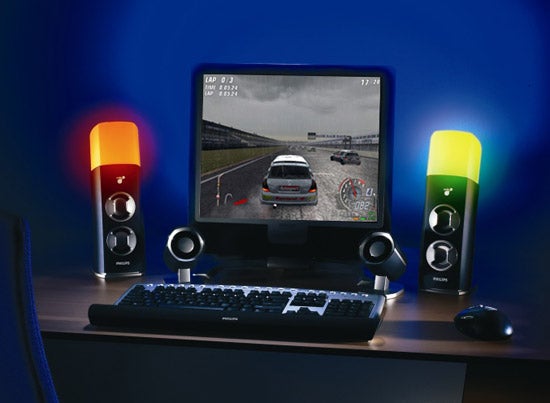 The rumbling wrist pad, meanwhile, responds to the roar of the engine and the interaction between tyre and terrain. The effect is good, much like the rumble in a console controller, but personally, I’d rather play with a steering wheel than a keyboard and have proper force feedback effects.


The surprise star, however, is the fans, which kick in as the car gains speed to give you an invigorating blast in the face as you race along. The effect might be more convincing if the speed of the fans (and so the blast of air) responded more directly to changes of acceleration or direction, but it certainly adds a certain ”je ne sais quoi” to the racing experience. £150 worth of ”je ne sais quoi”? On the evidence of TOCA Race Driver 3 alone, probably not, even if the title has held up pretty well, given its age.

Defcon is a trickier proposition: how do you use amBX in a slow-burning, abstract strategy game? The answer is to use the lighting to enhance the mood, with different colours of ambient light to tie in to the different stages of Defcon. This isn’t perhaps such a compelling use of the technology, but with the lights switched down the atmosphere is strengthened, giving your desktop that authentic Wargames missile command bunker feel. 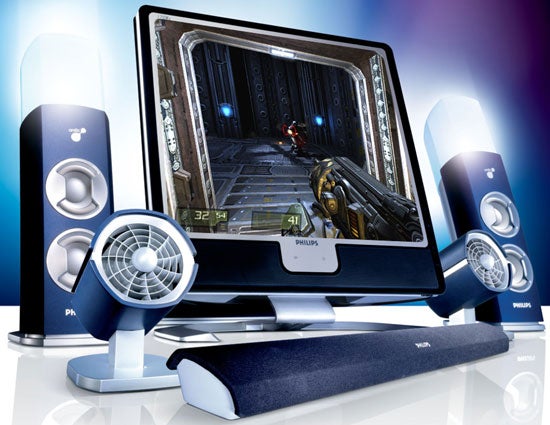 For a real glimpse of amBX’s potential, however, you need to try the specially modified version of Quake 4. It helps that the moody glow of the ambient lights works especially well within the game’s dark, futuristic interiors, and that the boom and rattle of shotgun and machine gun works so effectively with the powerful speaker system and vibrating wrist-pad. But Quake 4 also manages something that few other amBX titles seem able to manage – to really use the fans for atmospheric effect.


The key word is subtlety. Sure, you get a big blast of air when you make a big jump or let off a rocket, but the more impressive thing is how the fans produce small, low-power drafts to give certain environments a more immersive feel or to represent air ducts or outdoor spaces. The overall effect is to really drag you one step further into the game – and make a slightly dated and noticeably old-school shooter into a new, compelling experience. It really is that good.

The problem is that few other titles tested match up to that. Crysis could and should have been the biggie, but with only FXGen rather than a full mod controlling the amBX setup, it never really comes together as a coherent whole. The lighting works wonders in night scenes or when inside the alien craft, but not always so effectively in sunlight or jungle shade. It’s also a bit jarring that you get a rush of air when you throw a grenade and it explodes, but not when an old drum blows.


AmBX still adds something to the game, but the overall effect isn’t as convincing as it should be. The same goes for Mass Effect, where again, the lighting enhances atmosphere and mood but the rest of the equipment feels a bit wasted – at least in the stretch I played. Basically, while amBX works with a large library of games, it only truly comes alive when a game has been written or modified to make full use of it. All the more disappointing, then, that Race Driver: GRID doesn’t seem to use the fans or rumble pad at present.

On the positive side, there are some non-gaming uses for amBX. The speakers work particularly well for more strident forms of music, and as the software works with Windows Media Player, you can use it to create your own little disco (or chill-out zone) in whichever room your desk happens to be. You can vary the lighting for different genres, and the effect is pretty cool – at least for a while. Movies, too, benefit from amBX much as they do with ambilight. Use the VLC Media Player and you can even enjoy the same dual source lighting effect as the TV system’s stereo variant. 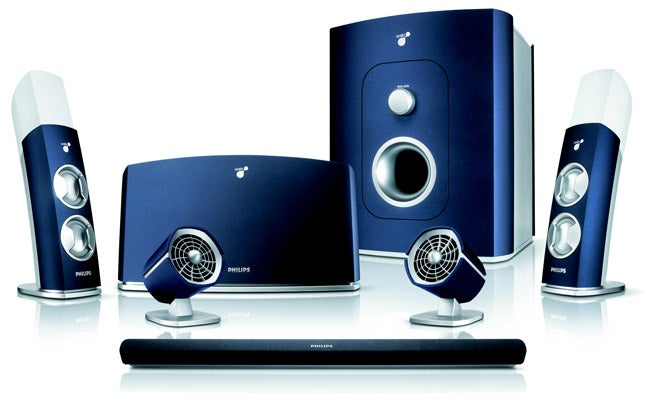 Even bearing this in mind, however, it’s hard to come up with a final verdict on the system. There’s no doubt that amBX works brilliantly with games that have been designed to make full use of it, particularly if – like Quake 4 – the use is subtle and well orchestrated. Unfortunately, this only represents a minority of titles. With many other games the effects vary between basic and genuinely atmospheric, and as the wrist-pad and fans aren’t used so much it’s hard to justify the expense of the full £150 Premium kit.


If Philips can back up its technology with more (and more recent) killer apps, then amBX could have an interesting part to play in the future of PC gaming, but at the moment it’s more a product worth watching than one you should immediately rush out and buy.


The technology really does work to produce a more immersive gaming experience, but only a few games currently make the best use of it. Still, with better software support amBX could be an interesting addition to the PC gamer’s arsenal.