A few months ago Creative released the Xdock. What many noted was that it wasn’t designed for its own line of Zen MP3 players, but for the ubiquitous iPod. Creative is not the only one to have thrown in the towel and start designing for the iPod – this rather sleek clock radio, with a built in iPod dock is from Philips. As they say, if you can’t beat’ em…


However, Philips has been a touch more savvy by making this clock radio dock combo work with both the iPod and its own GoGear MP3 players. And as the GoGear isn’t actually too bad at all, that’s actually quite a good thing. 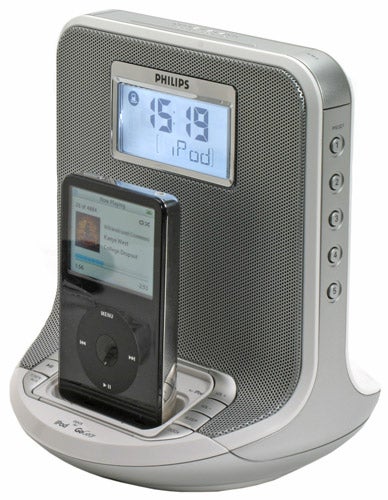 The charmingly titled AJ300D then, gives you music from a decent range of sources– there’s the iPod dock, you can use a Philips GoGear, there’s a FM tuner and at the rear there’s a line-in auxiliary so you can attache any other source. The Philips web page rather naughtily describes the radio as ‘Digital’ – what this means is that it contains silcon based tuner rather than an analogue box, but don’t confuse this with DAB – it’s still just FM. The reception in the office was such that I could only pick up Radio 1, but it fared better in a home environment. The absence of DAB is a negative though it would have inevitably pushed the price up.


The device is a wedge like, oblong affair, dominated by a silver speaker grille, which tapers out at the bottom into an iPod white plastic. It’s quite sturdily built, with a decent weight to it. It’s intended just as a bedside clock radio, so don’t think of it as a full iPod speaker dock. You need to plug in the external power adaptor – it can’t be powered by batteries. 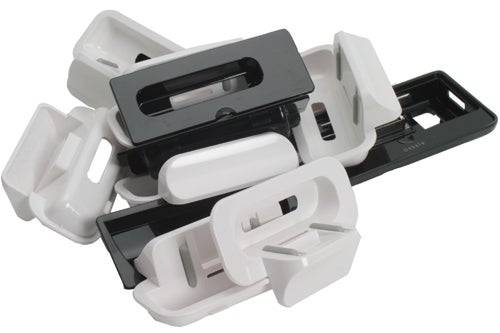 Inside the packaging, you’ll find a box containing an impressive 12 different docks, only one of which is for the GoGear, which just goes to show how busy Apple has been over the last few years. The dock is held in place by a switch, which you slide to unlock – the whole dock then comes out and you can pop in the one you need. It’s a neat solution.

Towards the top is a largish blue backlit LCD screen. The backlight can be turned dimmed or turned off by pressing the Snooze button that sits at the top, or ‘Repeat Alarm’ as Philip calls it. Once set, the time and date is displayed large and cleanly, along with indicators for whether the two alarms are active. 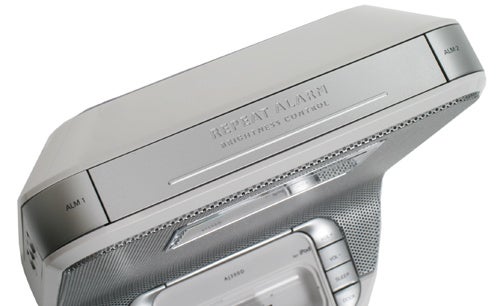 Set flush in each corner are buttons for setting the two alarms – just hold down and wait for the beep. Adjustments to set the time and the alarms are made by the rather small buttons set round the dock. Also located here are buttons for switching between the tuner, the auxiliary input and the dock.


There are a number of buttons running down the sides as well. On the left is the power button, beneath this is the button for setting the time and underneath this there’s a slider switch for choosing whether you want to wake up to music from the dock, the tuner or a buzzer. The latter two ensure this is still useful as an alarm without an iPod or GoGear present. The five buttons running down the right hand side are presets for the FM tuner. 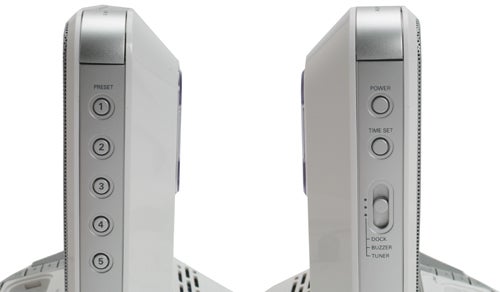 Adding to the sense that this is a complete product is a small but smart remote control. The main Play/Pause button has a shiny silver surround and it also sports a Mute button, which isn’t present on the body of the main unit. As you might expect you can skip tracks on your player with the remote and move between radio stations. The remote felt good in the hand and the buttons, while rubbery were better than some. Unfortunately, the main Play/Pause on our remote stopped responding, which was a shame – the others were all fine though. 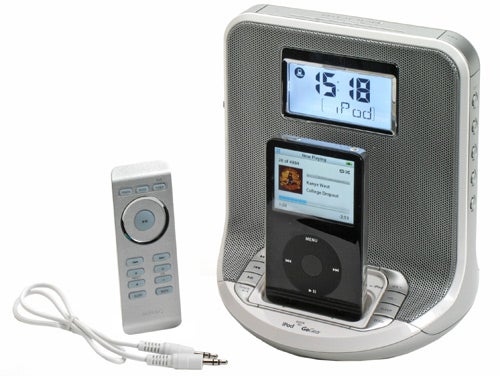 While I was impressed by the look, feel and ease of use I wasn’t expecting too much in terms of sound quality – it’s just a clock radio after all. However, I was pleasantly surprised. It’s rated at 12W RMS – 6W per speaker. I was surprised to find that there are actually two speakers behind the grille, so it is technically stereo, even though they’re so close together it’s virtually mono. However, by having two speakers it does make the sound output truer to the source.

The small speakers are assisted by the amusingly named ‘wOOx’ bass driver technology. Silly as the name may be, it’s highly effective, making the dock entirely listenable. The bass fills in the sound very impressively for such a relatively small box. I sat there listening to it while writing this review, without finding it too tiring or objectionable. While it can’t be described as Hi-Fi, we are talking about music that you’ll be listing to in the background as you get dressed in the morning and on that basis it gets a thumbs up. It goes plenty loud too so if you need to wake the rest of the household up, or indeed the neighbours you can make a good stab at it with this. 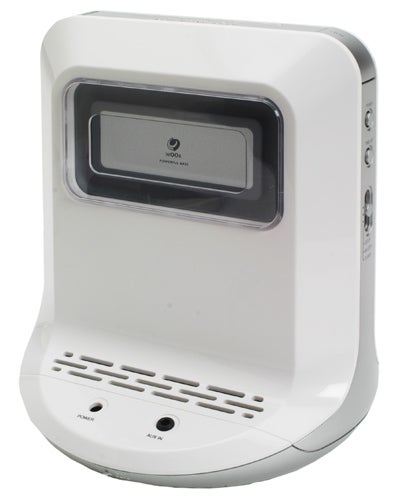 After you’ve set the alarm and the source you’ve selected kicks in, it does so gently, probably in a bid to avoid being smashed by a fist thrown by a bleary eyed owner. It gets louder though quite quickly and a tap of the button at the top will silence it for another nine minutes. The button is the whole top of the dock so you’ll have a good chance of making contact, without having to open your eyes. 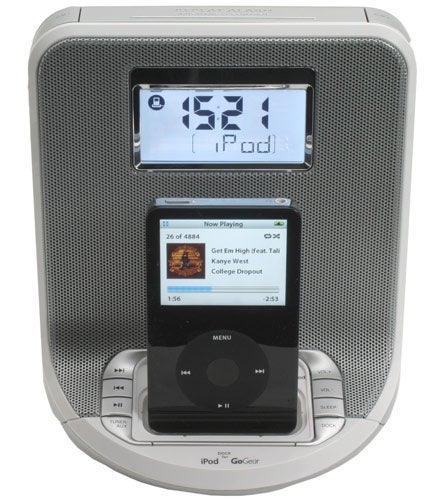 All in all, this is a genuinely good little clock radio, and a great way to give your iPod, or indeed GoGear, a good morning workout. It is well put together, easy to use and sounds pretty good too. The £70 RRP is a little on the expensive side but Dabs.com are doing it for only £56, though there was no stock at the time of writing. At that price it’s worth waiting for.


A clock radio for the iPod generation, which cleverly supports Apple’s player and Philips’ own GoGear. It displays Philips’ usual design appeal, is easy to use and sounds better than expected, and though it’s not super cheap, this is a strong product that’s easy to recommend.