There are times, however, when having a more traditional way of displaying your photos is preferable – just ask your grandmother. Short of actually printing photos, a digital photo frame is a great way of displaying pictures in a more visible manner.


Philips has been one of the pioneers in this market, and its photo frame range comes in seven and nine inch varieties with a choice of modern or wooden finishes. We have the nine inch modern version to review today, and aesthetically you can immediately appreciate the quality of the product. 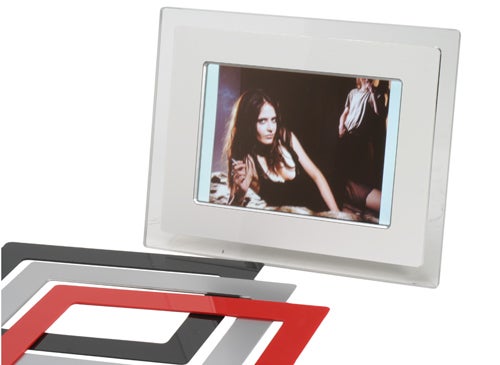 Set in the clear Plexiglass with a white plastic frame, the 9FF2M4 is an elegant piece of design that’ll look the part in any environment. Philips also includes a set of three red, black and silver magnetic frames, though in general the original white frame is the most appealing of all.


Internally it features a rather disappointing 18MB of memory; however this can be supplemented by any number of memory cards with support for SD, xD, MMC, CompactFlash, Memory Stick and Memory Stick Pro. Strangely it was also possible to use Memory Stick Duo cards using an adapter, despite the manual stating otherwise.


This means you should be able to take a memory card from any digital camera and put it straight into the Photo Frame. From there you can choose to display these pictures from the card itself, or you can transfer them onto the internal memory. Alternatively you can connect the photo frame directly to your PC using the mini-USB to USB cable provided. 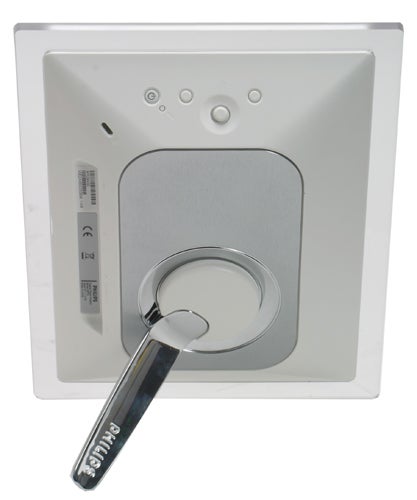 In either instance the Philips Photo Frame has a number of helpful features, providing basic editing functions to get your photos looking just right on the display. When transferring photos onto the internal memory from a memory card, the 9FF2M4 automatically resizes any photo to 720 x 540 – or the nearest it can get to this without upsetting the aspect ratio. This helps maximise space and this way Philips claim an internal storage capacity of between 110 and 150 photos.


This helps reduce the size of photos, thus saving space on the rather limited internal memory. Naturally photos will never be stretched to fit with bars used where necessary, while the Photo Frame will also automatically adapt to portrait and landscape pictures mode without any prompting.


When using large unedited images from memory cards the Photo Frame will scale pictures down to fit on the display, but you also have the option to manually crop images. This is a nice addition, enabling you to single out specific areas of a photo and rotate them too.

There are a few other options too with some rather naff – or fun depending on your disposition – ‘frames’ to choose from, along with a selection of black and white and sepia effects that you can add should you choose. You can also organise your photos into albums, and all of this is relatively easy, thanks to a neatly organised interface and control system.


Located on the right side of the back of the unit are a five-way joystick and two menu buttons, with power and reset buttons located just below. Using the joystick to navigate the various menus is really quite intuitive, with right and left used to move through the menu system while pressing the joystick in to select.


The other two buttons provide access to further options, with their current function always displayed in the bottom right hand of the display. Though it can be hard to locate these buttons simply by touch, it doesn’t take too long to get used to this system. 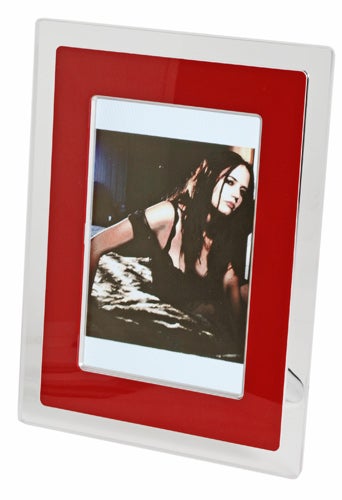 As is typical for a unit such as this, the 9FF2M4 features a multitude of slideshow options. These include different timings, the highest being four hours, as well as numerous different transitions – some of which are quite elaborate and distracting. Thankfully you have full control over it, so you can use whatever transitions you like. There’s also an in-built clock that can be used to set up alerts and allow the photo frame to turn itself on and off at regular intervals.


As if that weren’t enough 9FF2M4 also features a battery, albeit one that only lasts for around an hour. Considering this low figure you’d be forgiven for wondering why such a feature is needed, but in actuality this is very smart.


One of the strengths of printed photos is that you can sit down on a sofa, with a relative or other interested party, and simply flick through an album. Thus with a battery you can unplug the photo frame and sit down with it, using the manual browsing mode to flick through photos at your leisure. 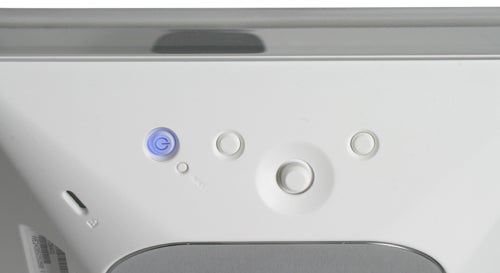 All of this on a display that’s wonderfully crisp, bright and colourful. Confusingly, Philips quotes a resolution of 800 x 480 and a viewable area of 680 x 480. Coupled with the screen that’s actually eight inches, rather than nine, it’s difficult to tell what Phillips is getting at here.


One can only assume that 680 x 480 is the actual resolution the screen displays at, though where the 800 x 480 figure comes from is anyone’s guess. Other than this confusion, the screen is excellent and is significantly better than what you’d get in the vast majority of cheaper alternatives.


It’s just as well too because the 9FF2M4 is by no means cheap. Coming in at £150 it’s certainly a premium item, one that you really must want. With the 9FF2M4, however, it is a case of “you get what you pay for”. If you like the quality but not the price however, you could opt for the seven inch version, which comes in at a slightly less hefty figure of £130.


An impulse buy it might not be, but if a digital photo frame is the answer to all your prayers then the Philips 9FF2M4 has to be on your list. It’s elegant, well designed and easy to use with plenty of useful features to help you get the most out of your photos.