Although it only launched its first OLED TV last year, Philips is upping its game for the new 9-series TV. Due to launch in January 2018, the first model, the 9603, is a 65-inch TV packed with the latest panel and processing technology. I managed to grab some time with it at IFA 2017, and here’s what you can expect from it.

One of the benefits of OLED is how thin the panels are, giving manufacturers the chance to make ridiculously slim TVs. The 9603 is no different, with barely-visible bezels and a TV that’s just a few millimetres thick. It doesn’t matter how many times I see an OLED TV; it still impresses me just how small they can be.

Such thinness does raise one issue: how do you fit in quality sound? Philips’ answer for the 9603 is rather smart, and it has built a soundbase into the TV’s stand. This base contains six forward-facing drivers, which should deliver clear and dynamic audio, and a backfiring Three Ring speaker, with a bass port. Sadly, I wasn’t able to test out the TV’s sound capabilities, but the 9603 should hopefully be a cut above the competition. 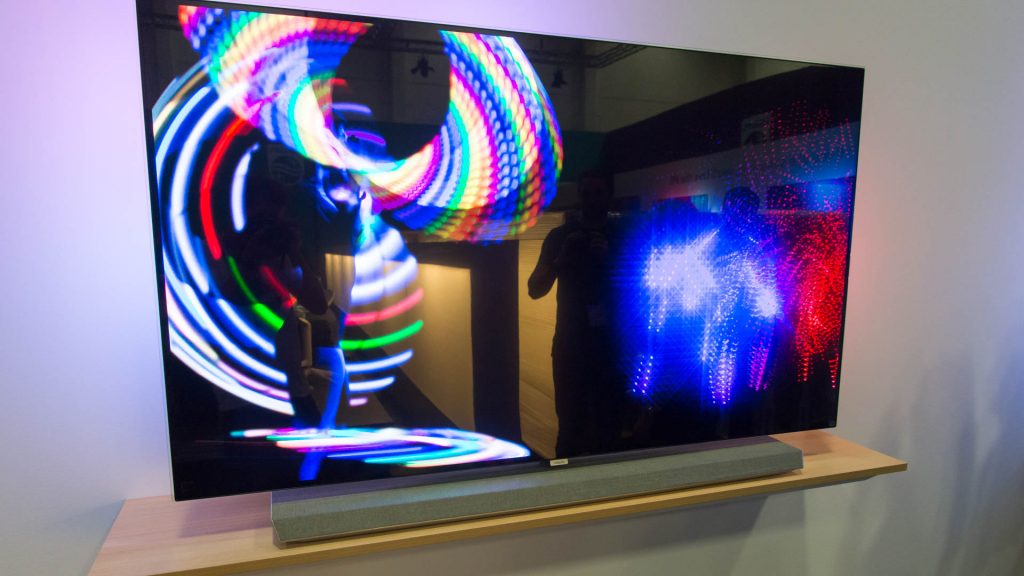 If you decided to wall mount the 9603, the soundbase can attach directly to the bottom of the TV, letting you ditch the built-in stand completely. Overall, this is one great-looking TV and at least the equal of any other OLED set.

Running Android Nougat, the 9603 is capable of being upgraded to run the Google Assistant, with all voice interaction handled by the neat remote control and its built-in microphone. The exact time frame for this upgrade depends massively on Google, so the first quarter of 2018 would be a reasonable guess at this point.

It’s an upgrade that I really want to see, as the Google Assistant is far more natural to talk to and interact with than Amazon’s rival Alexa – I much prefer the way that the Google Home responds, compared to the Amazon Echo, as a result. 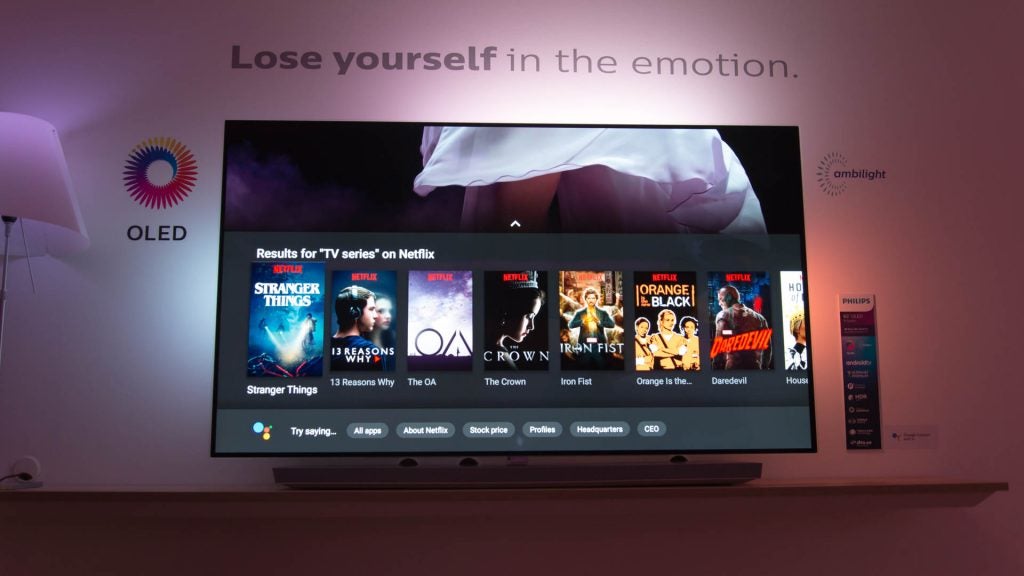 As well as for searching content, the Google Assistant can be used to control the TV, such as setting the volume level. And, if you’ve got any smart home products that integrate with Google, you can control them using your TV’s remote. I just hope that Google increases product support, as it still lags a long way behind Amazon in this regard.

Three-sided Ambilight is also available. It remains a great technology, helping expand the picture out of the confines of the set. This time around, Philips is launching an Ambilight app called AmbiSmart, so that you can control your settings directly from your smartphone or tablet. Neatly, you’ll be able to pick a static mode and adjust each Ambilight side’s colour individually. With the app, your TV turns into a light that works in a very similar way to Philips Hue. 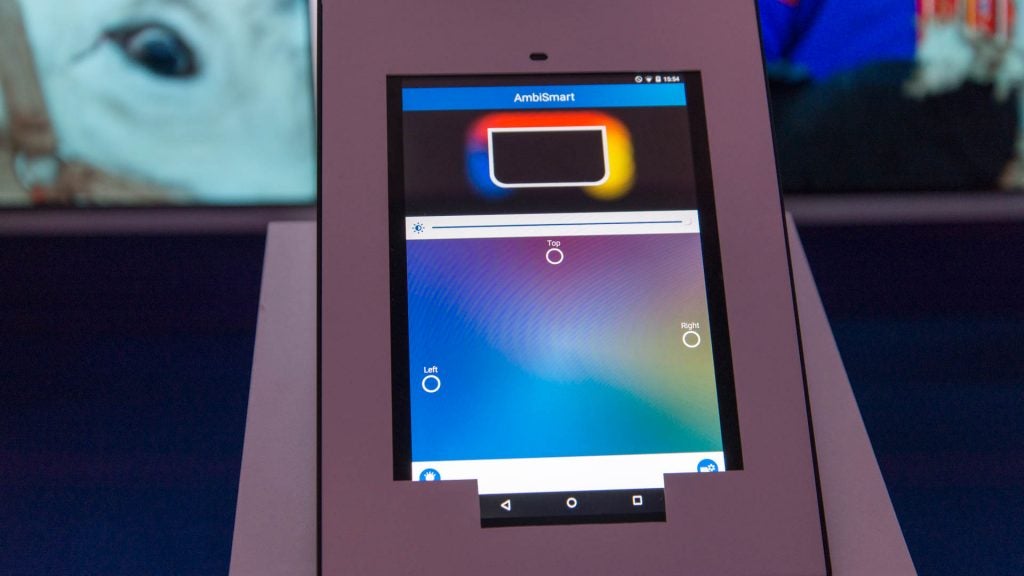 Performance is always hard to judge at a show, as I don’t get to choose my own source material or adjust any of the TV’s settings. Within those confines, I did get to see several video demos and a demonstration of the 9603’s P5 processing engine.

First, the standard demos. It’s clear from the video footage that I saw, that rich, dark blacks, and vibrant colours can be expected from the 9603. With a peak brightness of 900 nits (a benefit of the new 2017 LG OLED panel it uses), the 9603 is only 200 nits dimmer than the company’s newly-announced, quantum dot-powered 8602 (1100-nits peak white). True, some of Samsung’s quantum dot TVs can go far brighter, pushing up to 1500 nits for the Samsung Q7, for example, but the 9603 shows that OLED isn’t so far behind. And, with 900 nits combined with OLED’s perfect blacks, this TV handles all types of content well, including HDR (it has HDR10 and HLG support).

It’s the P5 processing engine that could really win it for the 9603. This new chip has been built from the ground-up to deal with modern content, from streaming media to high-quality 4K HDR content. It’s built to improve the five main picture quality variables: source perfection, sharpness, colour, contrast and motion. 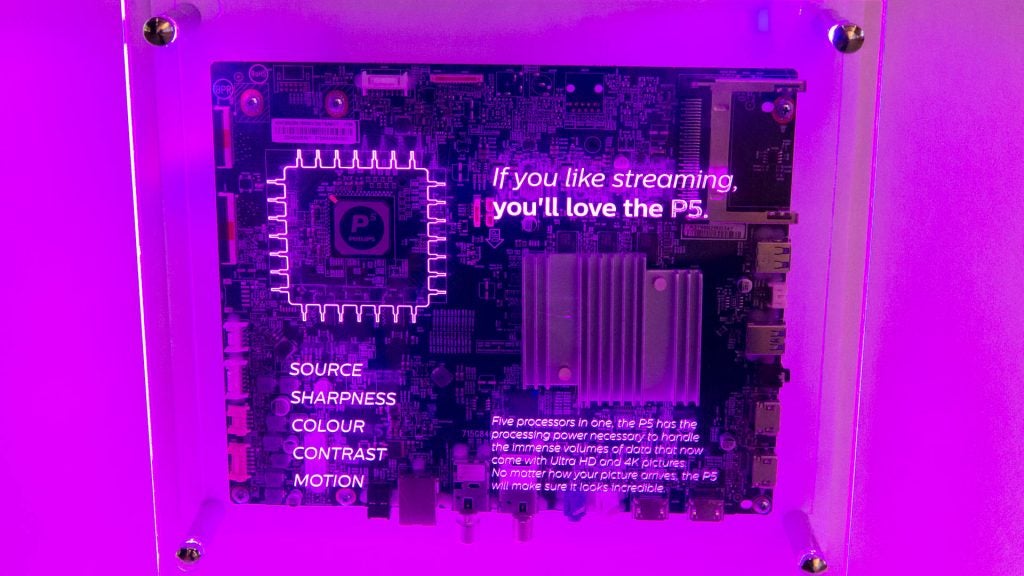 Watching a shoot out between Philips’ existing 9002 OLED TV and its LG, Sony and Panasonic competition (all of which use the same LG panel), the P5 chip proved to be impressive across a range of content. I found that the 9002’s picture was sharper, had fewer artefacts, better colours and more detail. Motion was smoother, too, with no judder and more detail, particularly in the background. Given that the 9603 is a newer product, with a newer panel, it should benefit even more from the image processing. Of course, this TV is UHD Premium certified.

Given that LG is supplying OLED panels to the biggest TV manufacturers, the thing that will distinguish models is unique features and image processing. From a first look, the Philips 9603 could well shape up to be one of 2018’s most desirable TVs, with Ambilight further setting it apart from the competition. You can expect to see the set on sale in the UK in January 2018, although no price has been confirmed yet.