Philips 6 series TVs are like AV catnip. Feature-rich and unfathomably cheap, they’re irresistible to enthusiasts looking for a cracking deal – and the Philips 6753 may be the brand’s best budget option yet. Offering Ambilight, a long-standing Philips trump card, as well as our favourite streaming services and catch-up via an all-new smart platform, plus HDR support, it goes out of its way to entice. 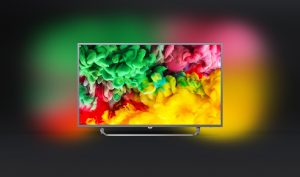 The set is swish without being ostentatious. An open metal stand supports the slim, gun-metal grey plastic frame. The TV isn’t superslim, a consequence of its Ambilight system, but it’s not heavy either. Titchy LED bulbs dot the periphery of the back panel.

Connections include three HDMI inputs (one with HDMI ARC), component video with stereo audio, two USBs, Ethernet and a digital audio output for connection to a sound bar. All three HDMIs are 4K Ultra HD capable, but only two support 4K at 60Hz.

The 6753 may be connected, but it isn’t an Android screen. Instead, it uses Philips’ new Linux-based Saphi Smart operating system – and I rather like it. The UI may be stripped back, but it doesn’t skimp on the essentials. For many users, it offers all they actually need.

The tuner is Freeview Play, which means a roll-back programme guide with easily accessible catch-up from all the main TV services. There’s also a generic satellite alternative.

There’s nothing new to be said about the three-sided Ambilight implementation used here, other than it works flawlessly. You can set mood hues to Follow Video, Follow Audio, Follow Colour and Follow Flag. The latter is a leftover from the World Cup that enables you to have the set cast the colours of your favourite team. 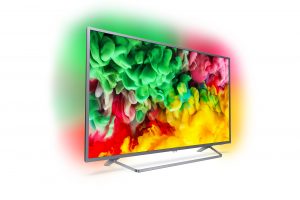 Picture quality impresses straight from the box, and is largely consistent across the various presets offered: Natural, Standard, Movie, Personal, Game and Vivid. Feed the set HDR, and you have the option of HDR Personal, HDR Vivid, HDR Natural, HDR Movie and HDR Game.

The panel presents a superbly sharp 4K image, although just how much extra detail you’ll see depends on the image preset chosen, and how far you park yourself away. Screen uniformity is good, a beneficiary of the smaller screen size.

The HDR movie mode is, predictably, muted, which often makes fine detail difficult to distinguish. For most UHD content, I found HDR Natural the best option.

There is, of course, a clear performance difference between high-end displays and budget sets like this when it comes to HDR. The 6753 is best thought of as an HDR-compatible TV, rather than an HDR-capable one. That said, it doesn’t disgrace itself with HDR sources. Indeed, it outperforms many rival sets in the same price class. 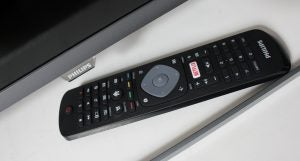 I measured peak luminance at around 350 cd/m2 (aka nits). The screen may not have the luminosity to show off specular detail, but it’s bright enough to not dim down to unacceptable levels in an effort to cope with HDR content.

Pictures are bright and punchy. Colour vibrancy is high. When the Empire’s Dreadnought blows up early in Star Wars: The Last Jedi (4K UHD Blu-ray), there’s a gratifying intensity to the explosions.

While there’s a raft of tweaking available in the menus, including Ultra Resolution, Gamma and Noise Reduction, a panel of this calibre and size rarely rewards experimentation.

Similarly, there’s actually little to separate the various Motion Styles available. All the motion presets generate levels of artifacting, with the exception of the Movie mode. Natural Motion processing really doesn’t have much influence on the set’s pictures either. Stick it on Medium and leave it at that.

The 6753 isn’t just a solid gogglebox, it also proves to be a good display for gaming. In Game mode, the set has an image lag of just 24ms, making it a great match for next-gen consoles.

The TV has a variety of Sound modes, allied to a powerful onboard amplifier rated at 20W. You’ll not be in a hurry to add a soundbar. 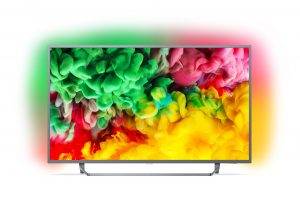 If you’re after a low-cost, small-screen UHD TV, then the Philips 6753 represents fine value. It offers sharp, clean pictures, has an effective smart platform, and there’s Ambilight onboard to sweeten the deal.

Philips has an enviable track record for quality budget TVs, and the 6753 doesn’t disappoint. Given the price tag, it would be unreasonable to expect advanced image processing and all the trimmings, but even so, this set is a sharp performer that does everything well enough.

Excellent value for a smaller TV.