Philips’ new Ambilux technology might have hogged the IFA headlines, but the Dutch brand also had another innovative – and potentially affordable – TV series up its sleeve in the shape of the PUS8601s.

As soon as I saw the 65-inch 65PUS8601 version (a 55-inch model will also be available) on the Philips stand I could tell it isn’t just another 4K UHD TV – it’s special.
My eye was caught by the way the startlingly slim (in both frame and depth terms) screen is mounted on two open frame feet that sit at TV’s bottom corners. The legs splay out and give the TV a unique, arched look.

The open mounting is a nice touch that is designed to help improve Philips’ Ambilight technology. It makes it so instead of just producing pools of coloured light from the top two or three of its edges, as is the case on most Philips TVs, the 65PUS8601 pushes coloured light from all four. 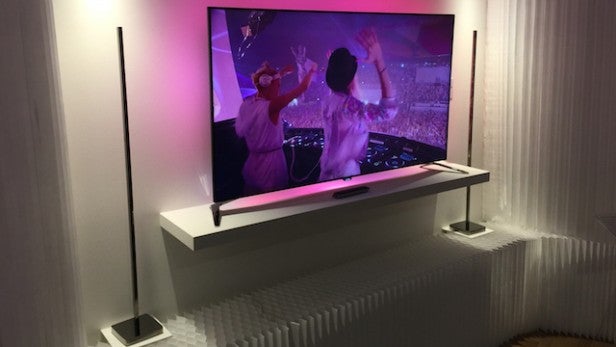 This isn’t the first time I’ve seen four-sided Ambilight, but Philips hasn’t done it for some time and it’s never been applied to such an elegantly trim frame. Testing the TV during my preview I found there’s hardly any frame standing between the picture and the Ambilight light show that it is supposed to harmonise with.

The 65PUS8601 doesn’t take Ambilight to the same level as the extraordinary projected Ambilux system, but its four-sided system is certainly beautiful to witness. It’s also arguably less distracting and more immersive than Ambilux.

The the 65PUS8601’s Ambilight system isn’t the TV’s only design trick. It also features forward-facing speakers which are only attached to the screen’s sides via magnets, making them easy to unfasten and remove.

The speakers are made out of seamless dark chrome and run the full height of the screen. Despite being only 17mm wide, they contribute significantly to an overall audio system that delivers 50W of power, 18 speakers, 16 micro drivers, and two Neodymium subwoofers.

Once detached, you can place the speakers on optional tower-style floor stand mounts (which will reportedly cost £300) that add more drivers to soup-up the lower-end of the soundstage. The main TV speakers also become wireless once they’ve been detached, so you don’t have to hide cables.

For the most part the 65PUS8601’s unique audio design pays off. Even with the speakers attached to the screen frame the TV sounds far better than most competitors, boasting more power, dynamic range and clarity as well as delivering that directness and attack you can only get when the majority of the speakers in a sound system are facing towards you.

Detaching the speakers and popping them onto the floor stands further improved sound quality.  This is because moving the speakers to the floor stands shifts the low frequency duties from the main speakers, leaving them free to produce mid-range and trebles with much more clarity and conviction. The soundstage becomes much wider and more cinematic. 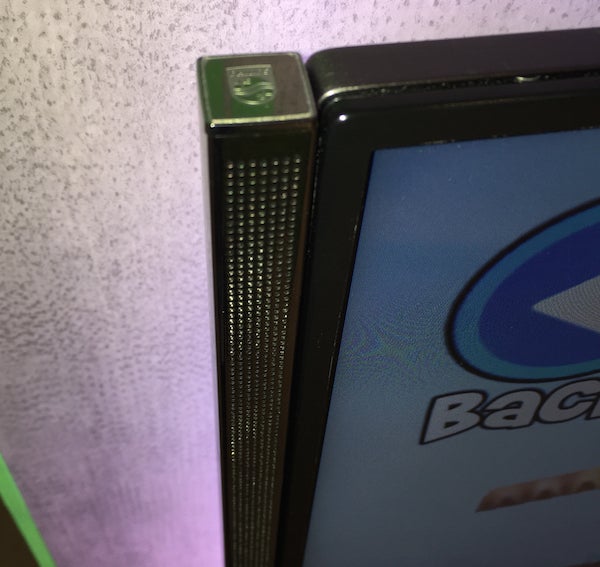 Despite my positive opening impressions, a couple of issues stuck out regarding the 65PUS8601’s audio innovation. First, Philips curiously hasn’t got any way of fitting the speakers to the wall after they’ve been detached – you have to use the floor stands. This is a pity given how well the ultra-slim 65PUS8601, with its four-sided Ambilight, lends itself to being fitted to a wall.

Second, in a detached configuration sound coming from the speakers can appear slightly dislocated from the pictures on the TV screen. This problem could be remedied by angling each speaker inward towards your seating position, but then the soundstage won’t be as expansive or detailed if you do.

It would have been easy for Philips to go into cruise control mode with the 65PUS8601’s picture quality given how many other attractions the set’s got going on. But it’s actually one of the brand’s most highly specified sets in picture quality terms, sitting just one rung down from Philips’ new 9600 series flagship models.

This brightness is enough to create, with the help of Philips’ various processing tools, a high dynamic range-like effect from non-HDR material. Though to be clear, Philips is not calling the 65PUS8601 HDR compatible. The only model in its new range Philips is currently claiming as ready for playback of native HDR content is the 9600 series – chiefly because it’s the opinion of Philips’ TV guru Danny Tack that edge LED TV technology isn’t really suited to HDR, however much Sony might now be claiming otherwise.

Having spent time in front of a couple of 65PUS8601’s watching a variety of content, my feeling is that the 65PUS8601 has the potential to deliver a truly spectacular picture. The screen is exceptionally bright, and it pumps out colours that are so consistently intense that they aren’t in the slightest bit overwhelmed by the four-sided Ambilight system, even when it’s running on its brightest setting.

The 65PUS8601 also looked ultra sharp with the native 4K content on show in the demos we saw. The TV retained this sharpness with motion, presumably thanks to Philips’ Perfect Natural Motion – albeit at the expense of some noticeable motion processing side effects at times. Though doubtless Philips was running its demos with this processing set much higher than we would likely choose to use it during test conditions.

Overall the innovative 65PUS8601 has the potential to make a real impact on the pre-Christmas TV space when it launches at the start of November.