The 65PUS7601 is the most exciting TV I’ve seen from Philips for years. Its 65-inch screen carries a native 4K resolution. It supports high dynamic range (HDR) playback via a direct LED lighting with local dimming, which is by far the best LCD lighting solution for HDR. It’s bathed in the glory of Philips’ unique Ambilight technology. It boasts the Android TV smart system. And perhaps best of all, it costs less than £2,000.

Philips has impressed recently when it comes to design, and the 65PUS7601 doesn’t let the side down. Its screen border is exceptionally trim, while its gleaming metallic finish feels opulent and futuristic. Its silver legs, meanwhile, are so thin and sit so close to the screen that you barely notice them. 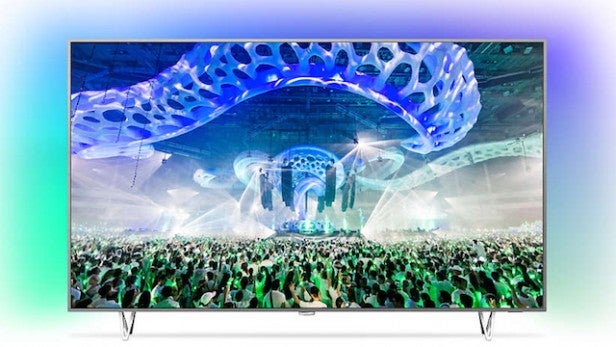 Build quality is outstanding, too. However, the star of the show has to be Philips’ Ambilight technology. On the 65PUS7601 this sees coloured light radiating from the screen’s top, left and right edges.

If you’re not familiar with Ambilight, it involves an array of individually controllable LEDs on the TV’s rear outputting coloured light that can be set to track the colour content of the image you’re watching – with startling tonal and positional accuracy.

The 65PUS7601 ships with a smart remote control that features a full QWERTY keyboard on its reverse side. This is a far better solution than having to use an on-screen keyboard to type passwords and search engine terms into the TV, for example. The remote even knows which way up you’re holding it so that you can’t accidentally press one of the buttons on the opposite side.

Philips has never been one to follow the herd when it comes to picture features, and with the 65PUS7601 the company continues in that vein. This isn’t necessarily a bad thing in performance terms, as we’ll see later, but it can make the 65PUS7601 complex to use. 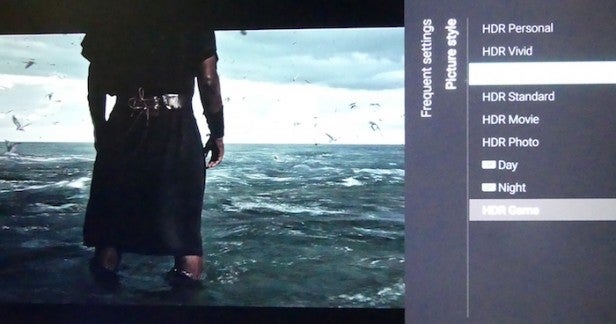 My first tip is to make sure the Ambilight system isn’t running on its most aggressive settings, either in terms of responsiveness or its brightness. A relatively gentle approach makes the difference between Ambilight enhancing your immersion and becoming a distraction.

Also make sure that all noise-reduction features are turned off for native UHD viewing, and handle the set’s UHD Resolution “upscaling” feature with caution: with some content, it tends to exaggerate picture noise.

The 65PUS7601 uses Philips’ most powerful picture processing engine, known as Perfect Pixel Ultra HD. This produces far more usable motion processing than Philips’ step-down processing engines, although I still wouldn’t recommend using it on anything higher than its lowest power setting. If you do, the picture can start to look unnaturally smooth. The highest two motion-processing options can also introduce unwanted side effects such as shimmering halos around moving objects. 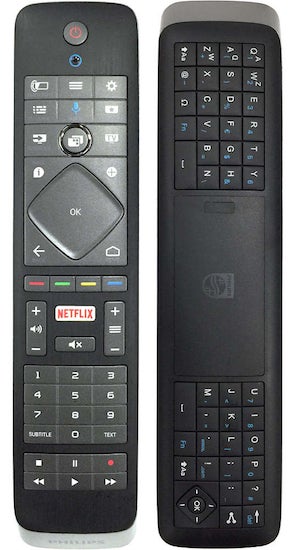 The single most complicated setting you need to wrap your head round, though, is Perfect Contrast. Philips has created this mode to provide control over the balance between brightness and clipping in the picture – the latter being the loss of detailing you can get in the brightest areas of HDR pictures.

If you want content to appear as it was mastered to appear, you need to set the Perfect Contrast system to off, but I think this leaves the 65PUS7601’s pictures looking a little flat. Turning the feature on produces a punchier image, but one where the brightest areas may lack detail. I suggest you choose a particularly bright HDR scene (the first arrival by boat into Neverland in Pan, for instance) and try the various options to see which suits you best.

The 65PUS7601’s headline technology is its delivery of HDR and native 4K images via a direct-lit LCD panel with local dimming. Tests have consistently proved the direct LED/local dimming combination to be a more satisfactory solution for HDR than the cheaper edge LED lighting option, since the former reduces the amount of backlight pollution you see with high-contrast HDR shots.

However, the 65PUS7601 doesn’t meet the specification requirements of the Ultra HD Premium standard laid out by the AV industry’s Ultra HD Alliance. It peaks at around 700 nits rather than the required 1,000 nits, and only covers around 76% of the so-called DCI-P3 colour spectrum rather than 90%.

Day-to-day use of the 65PUS7601 brings you into contact with Philips’ own TV setting menus and the Android smart TV system. Unfortunately, neither delivers a particularly friendly user experience. Philips’ menus are stuffed with submenus and interwoven complexities, while Android frustrates by always taking over the whole screen, wasting space with a pointless recommendations system, and failing to provide a decent level of customisation options.

Android does at least solve Philips’ old problem of lagging behind rival brands with the number of apps at its disposal. There are hundreds of them. However, there’s still no support for Amazon Video or the majority of the UK’s catch-up TV services.

Fortunately, Philips’ own non-Android smart TV “area” now supports Amazon, but you still only get half of the UK’s main terrestrial broadcaster catch-up TV services.

The powerful Perfect Pixel Ultra HD processing in the 65PUS7601 has tendrils that extend into essentially every part of the picture. Colour, contrast, brightness, HDR modes, motion… the 65PUS7601 covers pretty every aspect of TV picture performance you can think of.

Having such control at your finger tips is welcome, although the amount of flexibility on offer can be quite daunting. Especially since some of the features can actually make pictures look worse.

Certain types of hard-line AV purist will probably dislike almost all of Philips’ TV processing options on principle. That could be a problem given that you really do need to use some of the colour, contrast and motion processing tools if you want the TV to look its best.

And finally, the 65PUS7601 doesn’t feature 3D support. Philips has joined Samsung in restricting all of its TVs to 2D for 2016.