If you can do without the excellent sound system found on Philips' 903 OLED TVs, this step-down model is outstandingly great value

The Philips 65OLED803 is a 65-inch OLED TV equipped with Android TV and the brand’s unique Ambilight technology. It uses the same picture engine as Philips’ step-up 65OLED+903 models, but costs £500 less. This lower price means having to accept a less powerful sound system. Overall, though, the 65OLED803 is still a serious OLED bargain.

As usual with a relatively high-end Philips (Europe) TV, the 65OLED803 looks lovely. On the one hand, it’s at pains to minimise its impact on your living room. Its screen frame is exceptionally slim, and it sits low on two neckless, single-bar feet that are so narrow, you can barely see them when you’re sat directly opposite the screen. 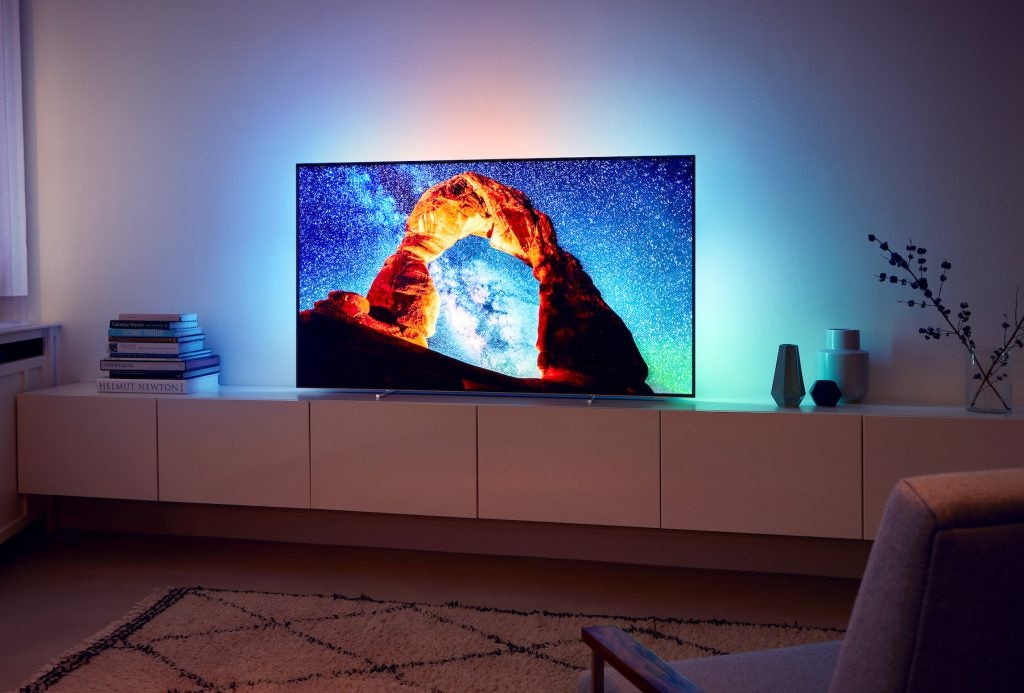 Switch it on, though, and the minimal approach is instantly obliterated by a kaleidoscope of colours erupting from its edges. This “Ambilight” system can be set to output single colours or to match the colour content of the pictures being shown. Choose the latter option and Ambilight tracks the tone and location of the image’s colours with remarkable accuracy.

I guess some people may find Ambilight distracting. In which case you can reduce Ambilight’s brightness and intensity, as well as how aggressively it tracks the picture. Set it up right for your room conditions, and it really does becomes an immersive and relaxing feature.

The Philips 65OLED803 isn’t quite as gorgeously well built as the 903. It also noticeably lacks the soundbar you’ll find along the bottom edge of the 903. It still manages to be incredibly thin at its edges, though, without feeling flimsy or brittle.

Shipping with the 65OLED803 are two very distinctive remote controls. One features a typical button count on the front, but a full QWERTY keyboard on the rear. The other is a unique single-bar design, reminiscent of the TV’s feet, carrying an absolute bare minimum of buttons. Both are fairly effective in their different ways – and the bar remote handily carries a mic for voice recognition and control.

Aside from its striking design, the 65OLED803’s main attractions are its OLED screen and “P5” picture processing.

The OLED screen enables each pixel to produce its own light and colour, independently of its neighbours. Cue potentially outstanding black levels and contrast, and pure colours that are undiluted by the backlight leakage associated with LCD TVs. 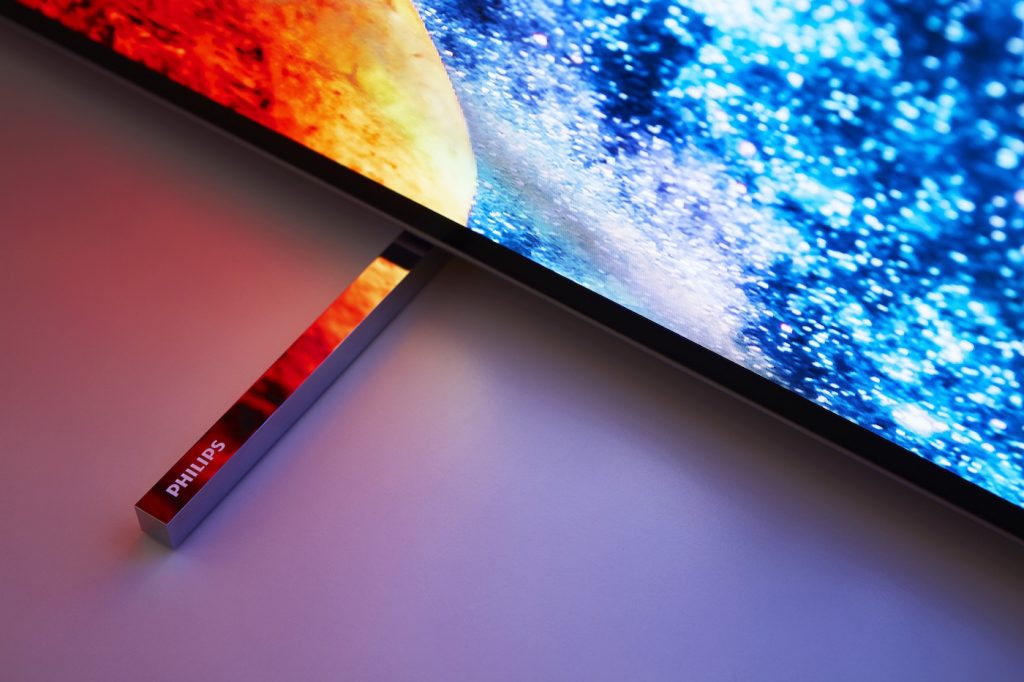 OLED TVs can also be watched from much wider viewing angles than LCD models, without suffering a reduction in colour or contrast.

The main downside to OLED technology would normally be that it can’t get nearly as bright as LED TVs. This is a potential issue when it comes to handling HDR content. However, the Philips 65OLED803’s P5 engine features a new component which we’ll see, genuinely boosts contrast.

There’s pretty much no aspect of the 65OLED803’s pictures that the new P5 system doesn’t touch. It adds a few extra processing steps over and above its 2017 iteration, too, including new detail and sharpness monitors, the previously mentioned peak brightness booster, and enhanced colour reproduction.

It’s worth saying that the P5 engine fits all of its myriad stages onto a single chip. This makes the processing more effective and efficient, as everything can be applied in the optimal order.

Related: OLED vs LED LCD – Which is the best display technology? 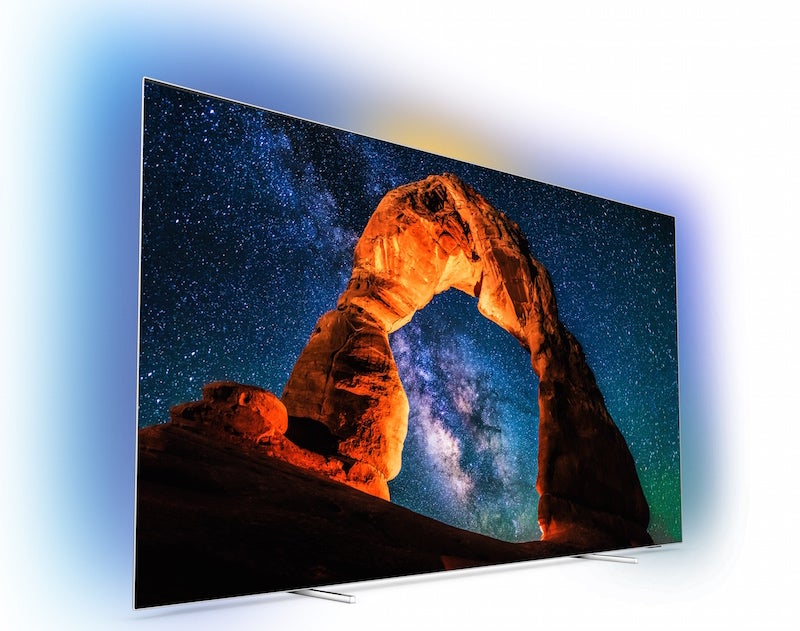 The 65OLED803’s smart features are delivered via Android TV. At the time of writing, this isn’t the latest 8.0 version of Google’s smart TV platform. Philips says that v8.0 will come via firmware update, however.

Personally, I’m not a fan of Android TV. Its interface feels clumsy, it doesn’t offer a sufficient number of customisation tools, and in its pre-v8.0 version in particular, it doesn’t work hard enough to prioritise video-streaming apps.

The Philips 65OLED803’s current lack of support for some of the UK’s biggest catch-up TV hitters – ITV Hub, All 4 and My5 – is also frustrating. (Sony adds YouView to circumvent Android TV’s UK catch-up TV blind spots.)

However, the 65OLED803 does run Android TV more slickly and stably than most of Sony’s TVs. Plus, there are a couple of significant Android-related benefits: support for Google Assistant voice recognition and control, and built-in Chromecast support.

Turning to the 65OLED803’s HDR support, there’s the industry standard HDR10, the HLG system used by broadcasters (including the BBC), and HDR10+. This latter format adds extra scene-by-scene data to help TVs reproduce HDR pictures better. There’s no support for the Dolby Vision advanced HDR system, though. Content available in Dolby Vision will default to its HDR10 layer. 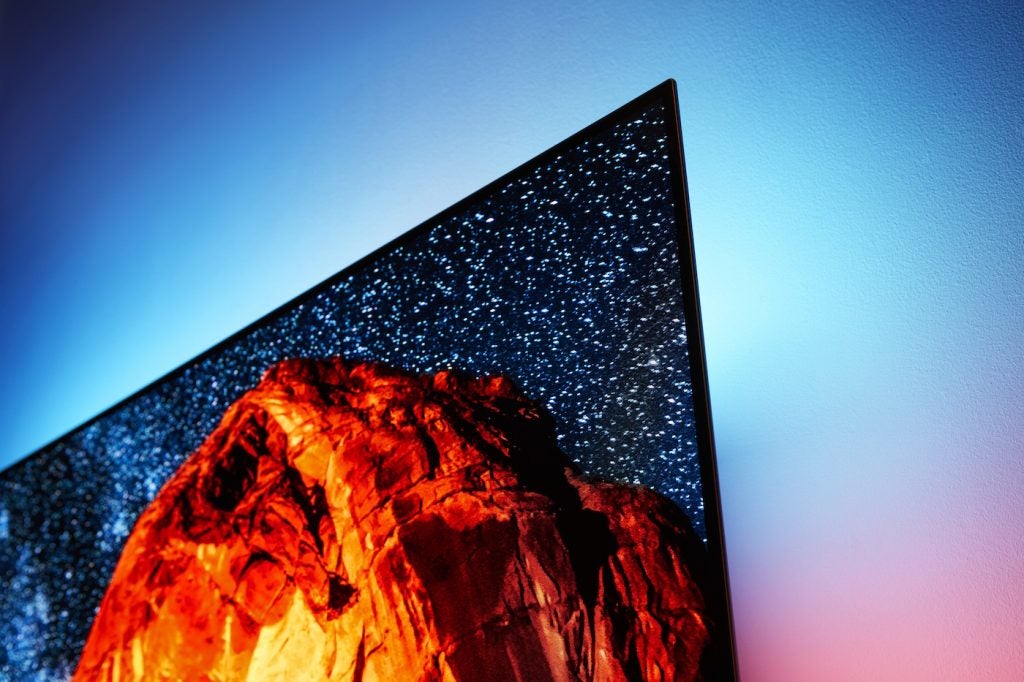 Overall I like the way the 65OLED803 puts a huge number of picture adjustments at your disposal, but it can make living with the set relatively labour-intensive. So here’s a brief rundown of the most important setup stuff to think about.

For starters, I’d recommend using the 65OLED803 Vivid picture preset. Typically, this wouldn’t be my advice, since Philips’ Vivid settings have previously proved over-aggressive. Here, however, it makes the most fulsome use of the P5 processor’s picture benefits while suffering hardly any of the unwanted side effects associated with older Philips processing systems.

If you really don’t want to take advantage of most of the P5 processor’s abilities, the Movie preset delivers a relatively “unadulterated” picture. Be prepared, though: the picture will be much less dynamic, bright and rich.

Whichever preset you use, make sure the noise-reduction settings aren’t running on maximum; or at all, when watching high-quality 4K sources.

When you’re watching 24Hz films, I’d suggest setting the motion processing to “Movie”. In addition, turn off all Eco features to retain good brightness with HDR content, and set the TV’s Contrast mode to Best For Picture.

Finally, always remember to activate the Game picture preset when gaming, if you want to keep input lag down to around 38ms.

The Philips 65OLED803 uses the same OLED panel and processing system as the recently reviewed Philips 55OLED+903 TV. It isn’t surprising, then, to find that its pictures essentially look identical. Which is mostly a good thing. 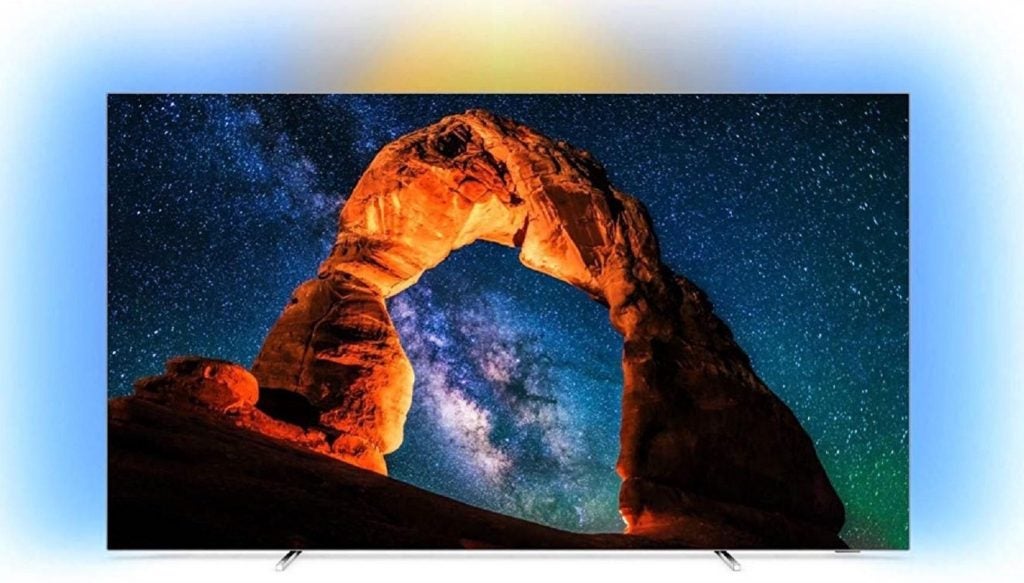 The most startling strength of the 65OLED803’s pictures is their contrast. We’re used to OLED TVs delivering beautifully rich, deep blacks. But no other brand of OLED TV to date serves up peak bright areas with as much punch as the 65OLED803. Classic HDR picture elements such as direct sunlight, bright artificial lights and gleaming reflections thus enjoy a degree of intensity I’ve never before seen on an OLED TV. Except for Philips’ own 903 models.

These unique-for-OLED brightness highlights persist, too, even when the highlight is sitting right alongside an area of inky blackness. This makes you blissfully aware of OLED’s natural contrast advantage over its LED rival. More importantly, though, it also delivers the most fulfilling HDR experience I’ve seen on an OLED TV.

The 65OLED803 excels with its colour in most ways. Saturations with HDR/wide colour sources look extremely rich and vivid. Extreme HDR areas such as bright blue skies can also look more natural than they typically do on OLED TVs – presumably because the extra peak brightness Philips has somehow eked out of its latest OLED TV unlocks slightly more colour volume.

The only colour issue I have is that skin tones with HDR content can sometimes look a bit “sunburned”. This issue can be seen on the 903s, too, although Philips has recently made considerable improvements on those TVs via a firmware update. This update is apparently set to arrive on 803 models too. The 65OLED803 picture’s sharpness is also a thing of wonder. The processing engine/Ultra Resolution feature somehow makes many other 4K TV pictures look soft by comparison – including those of LG’s latest OLED models.

This sharpness is also a feature of the 65OLED803’s upscaled HD images, where it’s generally delivered without the slightly gritty look of previous Philips’ upscaling systems.

Also, a new element of the latest P5 system can convert SDR content into HDR superbly well, ramping up the SDR image’s brightness and colour range with exceptional intelligence. By which I mean that its enhancements are applied to different degrees in different parts of the picture, depending on where they’re most needed. This leads to a much more consistently natural-looking faux HDR experience than those provided by most other TV brands.

The 65OLED803 is also mostly a cut above the norm with its motion handling. It can remove judder and blur without looking too processed, or causing lots of haloing around moving objects. The only issue is that my preferred “Movie” setting for the motion processing can leave judder with vertical camera movements.

The 65OLED803’s sound falls some way short of the excellent sonics of Philips’ step-up 903 OLED models. It’s relatively restrained; even at maximum volume, the sound always appears to be coming from behind and, sometimes, to the left and right of the screen, rather than projecting directly out towards you (as happens with the 903s).

There’s a much flatter feel to the 65OLED803’s sound, with less ebbing and flowing. Bass is noticeably more limited in range and impact, and the soundstage is generally less pristine.

However, just because it doesn’t rival the 903’s excellent sound, that doesn’t mean the 65OLED803’s audio is weak by typical TV standards. In fact, it has a nicely rounded tone that never sounds excessively thin or harsh. Voices sound convincing and clean, and even though the soundstage doesn’t really project forwards, it still has a big enough sense of scale to draw you into the world of the film or TV show you’re watching. 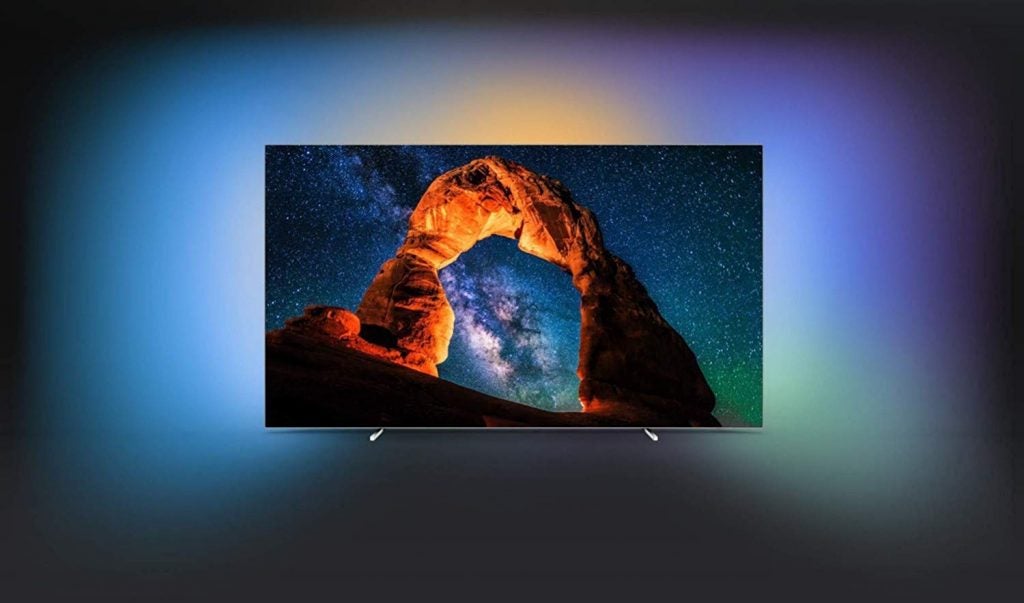 In some ways, the 65OLED803 is the most exciting OLED TV yet, and therefore a model that’s definitely worthy of consideration – especially given that its many charms can be yours for just £2399 at the time of writing (it has since gone back up to £2699 at the time of publishing).

LG’s OLED TVs come with a more friendly and comprehensive smart TV system, although the Philips has the picture quality edge thanks to its to sharpness and HDR “punch”.

Panasonic’s OLED TVs, meanwhile, deliver gorgeously subtle and refined – if less dynamic – images, designed to closely match the conditions of Hollywood content mastering suites. Neither the LG nor Panasonic sets have Ambilight, though.

One other alternative would be the Samsung 65Q9FN. This LED model is more than twice as bright, yet still delivers excellent black levels. However, it has to compromise the brightness of any light picture elements that appear against a dark backdrop.

While the 65OLED803’s sound isn’t nearly as good as that of Philips’ step-up 903 models, its picture quality is essentially identical. This makes its cheaper price look like seriously great value for such a high-quality set.