For the most part, 3D is the forgotten technology of CES 2013. Even when it is mentioned, it’s usually as a side-benefit of 4k/Ultra HD technology rather than a hot attraction in its own right.

Tucked away in a corner of a suite in the Venetian hotel, though, is a 3D TV from Philips/TP Vision that might just put 3D back on the agenda. How? By delivering a glasses-free 3D experience that doesn’t suck.
Philips’ new TV – which currently doesn’t have a release date but really does seem to be on Philips’ product roadmap – is not the first glasses-free 3D TV we’ve seen. That ‘honour’ belongs to the rather uninspiring Toshiba 55ZL2, which impressed more with its native 4k resolution than it did its soft, low-resolution 3D. However, Philips feels its new glasses-free offering is good enough to turn the marred perception of glasses-free 3D technology on its head.

The screen in question is a substantial 60in LED model, and has at its heart a native 4k resolution. As with Toshiba’s ZL2, having this amount of pixels to work with plays a critical role in enabling the arrangement of lenticular lenses on Philips’ screen to support multiple viewers (up to 12) and viewing angles without compromising the resolution of full HD 3D Blu-rays. 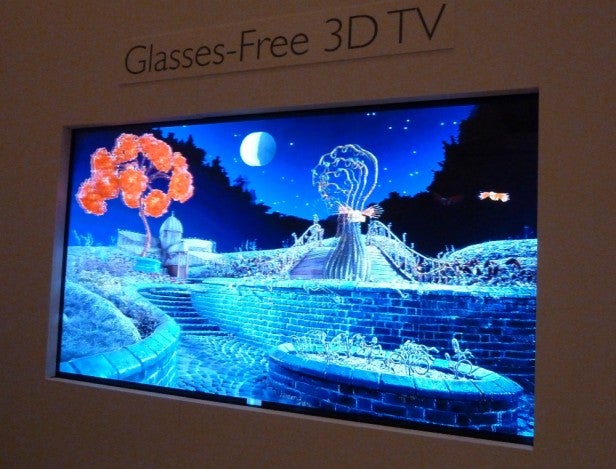 The Philips glasses-free approach differs from the Toshiba one in a number of key respects, though. First, Philips has very deliberately limited the perceived depth into and out of the 3D image to around 30cm. This is much less than the 1m or so possible with 3D TVs that use glasses, and is also less than Toshiba attempted to deliver with the ZL2. However, it’s only by limiting the perception of depth in this way that Philips can keep images at a 1920×1080 resolution. If they’d pushed it further the image would have started to soften considerably.

Another significant difference is that Philips’ glasses-free set doesn’t use a switching lens. The downside to this is that when watching 2D, you only get a full HD 1920×1080 resolution, rather than the potential 4k resolution possible with the ZL2. The upside of Philips’ approach, though, is that not using a switching lens system will potentially make its screen much less expensive than Toshiba’s £7,000 effort.

The 3D pictures from Philips’ latest glasses-free screen are startling to say the least. Having positioned ourselves behind an ideal viewing distance white line on the demo room floor and then made sure we were in a viewing sweet spot where we weren’t seeing any cross-over point lens distortions, it immediately became apparent that we weren’t just watching 3D without wearing any glasses, but that we were watching full HD 3D without wearing any glasses.

Clips from the 3D versions of The Smurfs and Yogi Bear were both rich in detail and texture despite the fact that they genuinely were appearing in 3D. They were also strikingly consistent when it came to focus across the image, suffering hardly any of the soft spots that were so damaging to the Toshiba. 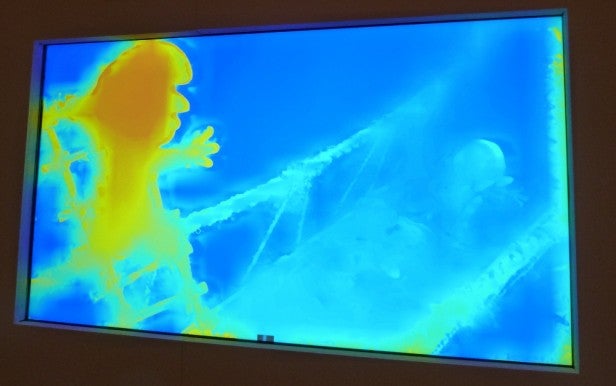 More good news found us far less aware of the physical structure of the lenticular lens array on the Philips set than we were on the Toshiba one. In fact, from the 3.5m viewing distance recommended in the demo – a distance that would be similar to that of many living rooms – we couldn’t really see any lens structure artefacts at all.

We also felt able to move our heads a little further left and right than we could with the Toshiba 55ZL2 without the picture distorting, and the Philips glass-free 3D TV also outgunned the Toshiba by some margin with the colour richness and contrast of its 3D images.

So impressive is the Philips screen’s contrast and sense of sharpness, in fact, that it helps create a greater sense of depth in its 3D images that goes a good way towards disguising the 30cm in/out depth limit Philips has imposed on its screen.

Also boosting the sense of depth is Philips’ proprietary auto-focus processing, which intelligently analyses the incoming image content to figure out where in depth terms the image will most benefit from receiving the maximum focus. This yields much sharper, more dynamic results than just sticking with one static focus plane.
With one or two momentary exceptions, meanwhile, the auto-focus processing and Philips 3D ‘mapping’ technology do a startlingly good job of accurately judging where objects belong in its 3D frames, despite the fact that the glasses-free technology being used essentially requires the TV to remap the 3D image from scratch. Obviously the processing engine required to do this doesn’t just throw away all the 3D data on a 3D Blu-ray, but it uses it to inform its newly drawn pictures rather than just reproducing the 3D effect that was submitted to the Blu-ray disc.

This remapping of the 3D space may annoy AV purists, we guess. But the Philips Glasses-free 3D TV is about making 3D as convenient as the public wants it to be while retaining an HD resolution we’ve all grown to love. And in this respect, it succeeds pretty brilliantly.

In fact, with Philips promising 2D-3D conversion in the final production model, its new glasses-free 3D talents genuinely raise the potential of households watching 3D permanently rather than on rare ‘special occasions’. And if that doesn’t represent a total sea-change in 3D’s living room potential, we don’t know what does.