The 55PUT6400 is the first TV we’ve tested from Philips’ 2015 range – and as introductions to new ranges go, it makes quite a statement. Despite squeezing a 4K UHD pixel count into its 55-inch screen, and sporting Google’s latest Android TV system, the 55PUT6400 costs just £749. This makes it cheaper than many similarly large Full HD TVs.

In its own understated way – and despite not boasting Philips’ famous Ambilight technology – the 55PUT6400 is a seriously stylish TV. Its angular, minimalist bezel looks modern and sophisticated, while its metal frame-style stand exudes a winningly industrial, no-nonsense elegance. 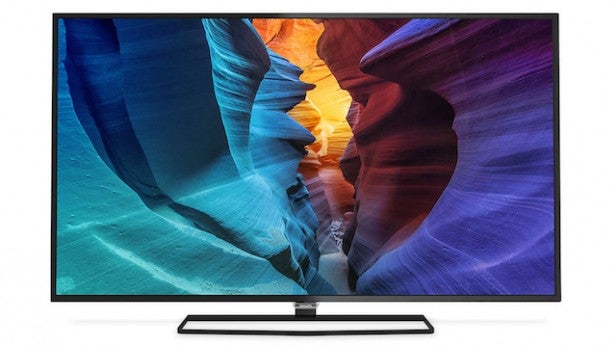 The screen frame is slim, and the set’s rear is both trim and well stocked with connections. These include four HDMIs, three USBs, and an RJ-45 LAN port. You can also add the 55PUT6400 to your home network via a built-in Wi-Fi system. My only issue with the design is that only one of the HDMIs supports the 4K-friendly HDCP 2.2 protocol.

The network options can be used for streaming multimedia files from networked DLNA-enabled devices, and for taking the 55PUT6400 online with Philips’ latest smart TV system.

This smart TV system represents a big leap forward. Alongside the familiar, slightly old-fashioned Philips smart TV system, menus can now be found via the much busier and more glamorous Android TV system first seen on the Sony KD-75X9405C.

Philips actually introduced Android to some of its high-end TVs last year. However, the sets were built on Android 4.0, rather than the more TV-friendly Android 5.0 Lollipop version used in the 55PUT6400.

In addition, many of the 2014 high-end Android sets were released in only select territories in Europe – which didn’t include the UK. So for us Brits, the 55PUT6400 is our first glimpse of seeing Philips strut its Android stuff.

Unfortunately, as you’ll know if you’ve read Trusted’s review of the Android TV platform, I’m not huge fans of what it brings to the smart TV table.

Its recommendations system is flawed; its presentation is cluttered and overpowering; it offers minimal customisation potential; and it doesn’t work hard enough to streamline access to the sort of apps – predominantly video-streaming sources – that most TV users want most. 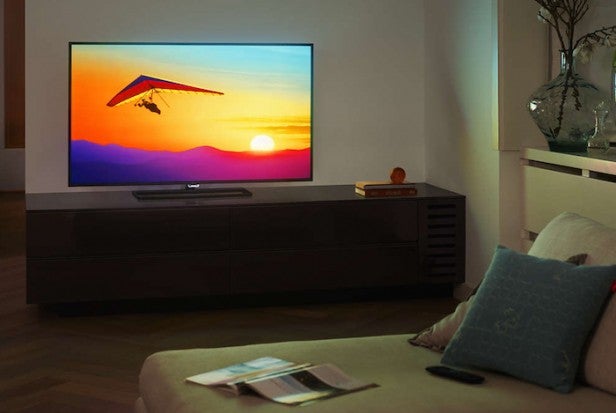 The decision by Philips to add a “Philips Collection” shelf to the Android TV menus feels poor too, since it causes doubling up and confusion.

There’s no sign of the ITV Player, All 4 or Demand 5 apps now included with the majority of big UK TV brands. Nor could we locate the Amazon Prime Instant Video app, even after spending an hour or so uploading the latest firmware.

Fortunately, Netflix is present and correct – and following the aforementioned update, it was able to stream the service’s native 4K content.

One last point to cover about the 55PUT6400’s smart features is that the set carries 8GB of built-in storage for downloaded Android apps. This isn’t as much as you get with the Sony KD-75X9405C. But crucially, and unlike the KD-75X9405C, the 55PUT6400 allows you to expand this storage capacity by adding a USB drive.

However, it does still boast a 700Hz-emulating motion system, direct LED lighting, Micro Dimming Pro technology for adjusting contrast, which is based on analysis of both your room lighting and 6400 zones of the image content. It also has Philips’ proprietary Ultra Resolution technology for making all content – including native 4K – look sharper.

Included in this picture processing technology are Philips’ unique line-thinning algorithms, designed to tackle the tendency for lines to appear thicker after being upscaled or sharpened than they did in the original footage.

While Philips’ penchant for heavy-duty image processing is capable of yielding dazzling picture-quality results, it does also mean that you should spend longer tinkering with the 55PUT6400’s picture settings than you would any other brand of TV.

While I wouldn’t say the tips below need to be treated as gospel (Philips understands more than most brands that different strokes suit different folks where TV pictures are concerned), to me they’re important steps you should take to achieve an immersive-looking picture.

First, make sure all noise reduction is turned off for native 4K UHD and good-quality HD content. This reduces the chance for the picture to look soft or “laggy”.

Also make sure the Content Mode is set to Standard, rather than Best For Picture or Best For Power, and that the Dynamic Contrast feature is set no higher than Minimum. Failure to take these steps can result in distracting brightness “flickering”.

I also found myself distracted by noise with the Ultra Resolution feature active, and while for much of the time the Light Sensor feature is actually quite good at automatically tweaking images in response to your room conditions, it should be turned off for dark-room viewing. This is because it tends to take uncomfortable amounts of brightness out of very dark scenes.

The TV’s Video Contrast setting was reduced to around 80%, and its core colour setting to around 52%. In addition, the colour-enhancement features were turned off, at least for non-4K content, since these tend to have a negative impact on subtle tones – especially skin colours.

Finally, after a lot of trial and error, we settled on the Minimum setting of Philips’ Natural Motion circuit. This leaves a little residual judder during camera pans, but it also minimises the potential for you to see flickering or shimmering halo artefacts around moving objects.

Alternatively, you could leave this part of the processing switched off completely, but in this mode the 4K effect can be reduced by traces of motion blur.