The PUS9435 could be the model to adjust our expectations of how a TV in the slightly less premium TV market ought to sound. However, we'll need to see more of its picture performance and hear about its pricing before we get too excited.

At the start of the year we pondered the innovations that could trouble the TV market in 2020, and one was TV manufacturers extracting better sound from more affordable models.

Well, it didn’t take long for that to bear fruit. Philips’ 9255 (43 inches) and 9435 (55 and 65 inches) are set to be released later this year and appear to continue the good work they and B&W have achieved higher up the range.

Both the 9235 and 9435 were on display at a Philips event back in January, but we were only really able to get a true sense of the latter model.

Both units share a similar aesthetic (the smaller 9235 features a white bezel), and take cues from last year’s OLED+934. The Philips 9435 comes with a 2.1.2 Bowers & Wilkins speaker – and, as we’ve come to expect from Philips in recent years, the 9435 is an attractive set. 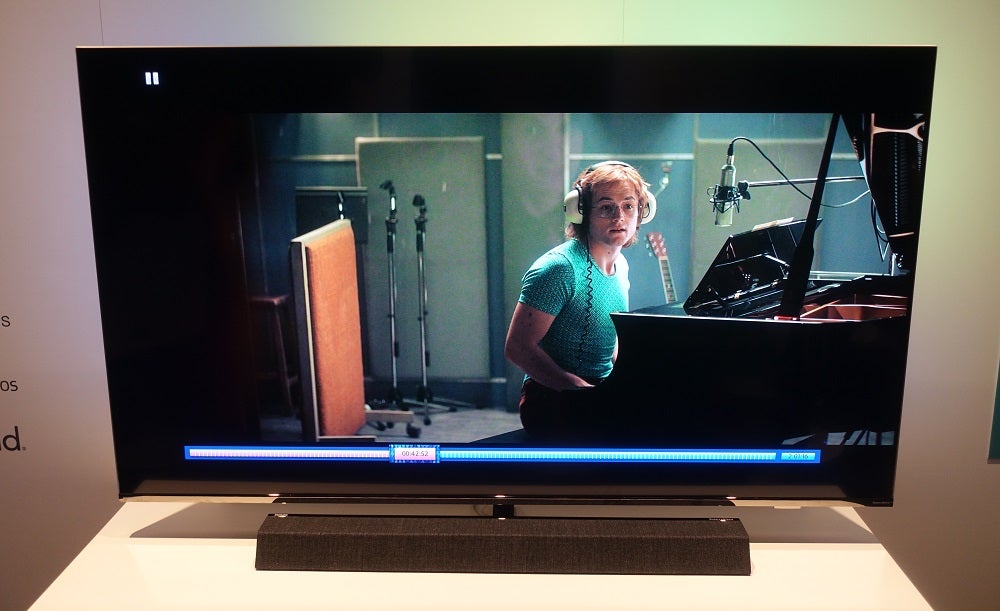 It’s an LED panel not OLED, and visually it’s a minimalist and clean-looking set. The speaker enclosure – B&W stresses it isn’t a soundbar – is attached to the TV via a T-shaped stand, which gives the impression of a “floating” screen. The neck of the stand uses a small metal plate to strengthen the support, but it also means there’s no possibility of swivelling the TV around.

The speaker enclosure is covered in the fashionable Kvadrat cloth, and since tweaks are still being made, the final version will probably be slightly bluer than what you see.

The angular-shaped remote is a change from the plasticky units that often accompany Philips’ TVs. It sports a black finish, features key-lit buttons, quick access to Netflix and Rakuten TV, and the rear of the remote is made out of responsibly sourced Muirhead Scottish leather.

The 9435 can be mounted on a wall; but the 9235 doesn’t come with this option. In all honesty, there isn’t much reason to wall-mount a TV that’s only 43 inches in size.

Philips 55PUS9435 features – The Atmos speaker enclosure is the highlight

Ambilight is of the three-sided variety, and the 9435 supports game/lounge light modes. The P5 picture engine is supported, but not the AI version that comes with this year’s OLED sets. The 9435 features universal HDR support – HDR10, HDR10+, Dolby Vision – with peak brightness around 500 nits.

Android TV Pie (9) is the interface of choice. Google Assistant is built in, naturally, but the 9435 and 9235 support “Works with Alexa”, so an additional speaker will be required for Alexa voice control. 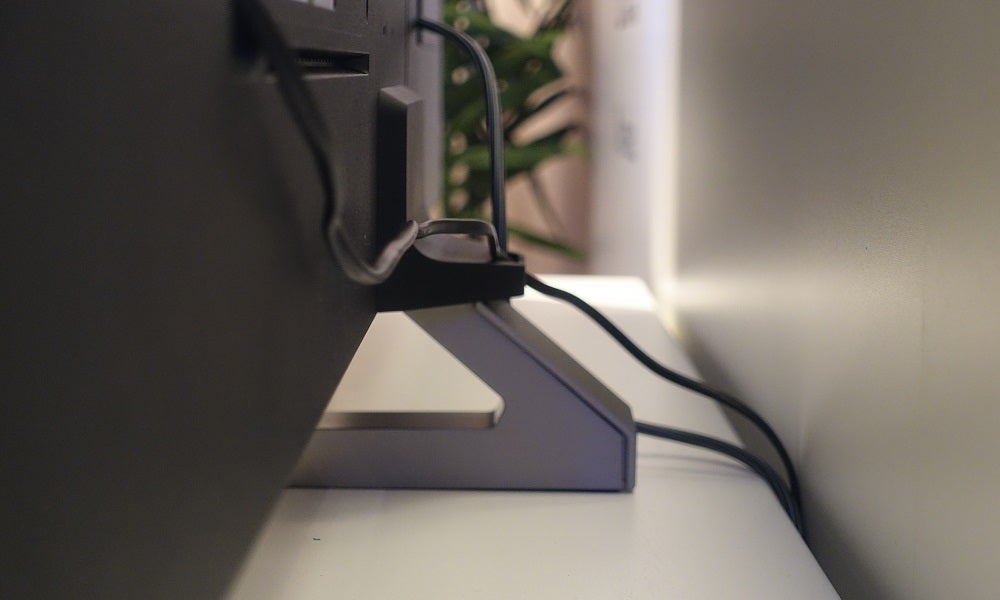 Philips has confirmed that Disney+ will be supported when it launches in March. There’s no support for eARC in this year’s range, but there is room for some HDMI 2.1 features such as Auto Low Latency Mode (ALLM). Only two out of the four HDMI ports can passthrough a HDR signal.

The 9435’s speaker enclosure uses technologies of the type that can be found inside B&W’s 600, 700, 800-series of loudspeakers, such as a flow port around the back. Alongside the two tweeters are four mid-range units and two upward-firing Atmos units located at either end of the speaker enclosure. The bass drivers are supported by ABRs (auxiliary bass radiators) to provide that extra low-end oomph.

Since this was a demonstration focused on sound rather than vision, it was difficult to gauge much about the visual performance of the 9435. From what we could see, though, the Philips’s visuals appeared strong and rich, with punchy-looking colours.

In terms of sound quality, the 9435 was put up against last year’s OLED+934. Tracks such as Dua Lipa’s Don’t Start Now and Freya Ridings’ Lost Without You were used as a testbed for music before a clip was played from Netflix’s Lost in Space and a scene from Rocketman. 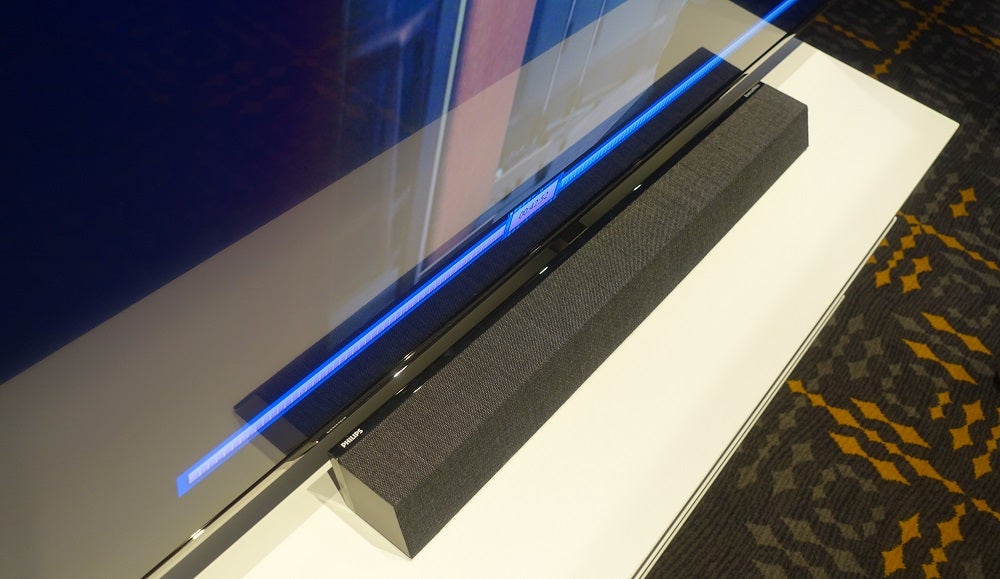 In terms of music, the 9435 boasted a characteristically B&W performance with a very musical sound. Vocals of each singer were strong and clear, and the performance of each track was big, warm and spacious. Bass was also good; overall, it was a confident showing.

The clip from Lost in Space was more hectic, and the Atmos heights more subtle. However, even in the midst of all that there was good reproduction of detail, with the size of the spaceship as it descended from space given a good sense of weight and heft as it lurched through the atmosphere. 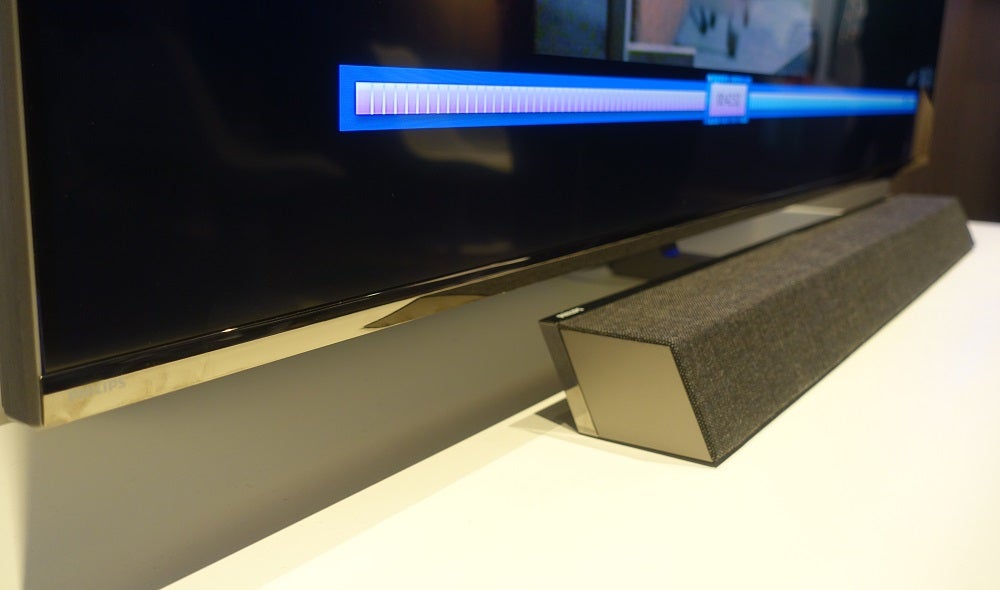 Voices off-screen could be heard in the height channels just above the TV, adding to the sense of verticality. I wouldn’t say it was the most immersive of performances – it would be hard to achieve without rear channels to help – but it was nevertheless an impressive showing from a TV that isn’t expected to cost anywhere near as much as the OLED+934.

In fact, the performance difference between the OLED+934 and the PUS9435 wasn’t as big as I’d have thought it would be. The OLED+934 was clearly the stronger performer, but the sonic character between the two was similar, which can only spell good things for the PUS9435 when it comes out later this year.

From our brief time spent with the Philips 55PUS9435, it appears to be a set that may go some way to adjusting our expectations of “good sound” in the slightly less premium TV market.

With prices for the PUS9345 set to be around the £1200 to £1300, it’s too expensive to shake up the budget market, and we’ll have to wait and see how well it fares in other areas – but the 9435 could carve out a niche area for itself between the affordable and premium.