The generously specified Philips 55PUS6401 is a budget 4K flatscreen with HDR (High Dynamic Range) compatibility and Ambilight. This 6 Series model is the largest in a family of three at 55 inches. It’s joined by the 49-inch 49PUS6401 and 43-inch 43PUS6401.

If you’re looking for a bargain UHD TV to partner the Xbox One S, or to binge-watch shows on Sky Q, then this TV certainly appears to tick all the right boxes. But there’s devil in the (2160p) detail… 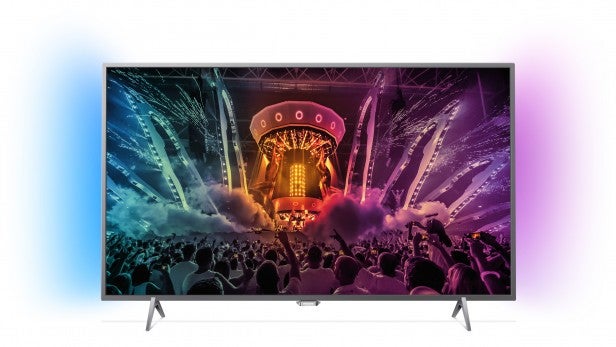 This set may not be ultra-slim – some of its heft can be attributed to the inclusion of Ambilight – but it comes in a fashionable grey and stands neatly on two bolt-on A-frame feet. The overall appearance is classically neat.

You do get ARC (Audio Return Channel) and MHL for smartphone support, though, as well as three USBs (one of that can be used to record to an external hard drive for basic time-shifting). There’s also scart and component legacy connections, plus a digital audio output. In addition to an Ethernet LAN port, the set has integrated Wi-Fi.

There’s a choice of either a single Freeview HD tuner or generic HD satellite.

The remote control is a conventional IR wand. We’ve seen zappers with keyboards on the rear from Philips before, but this isn’t offered here. The remote is overly directional, which meant we had to point directly at the set to exert control. 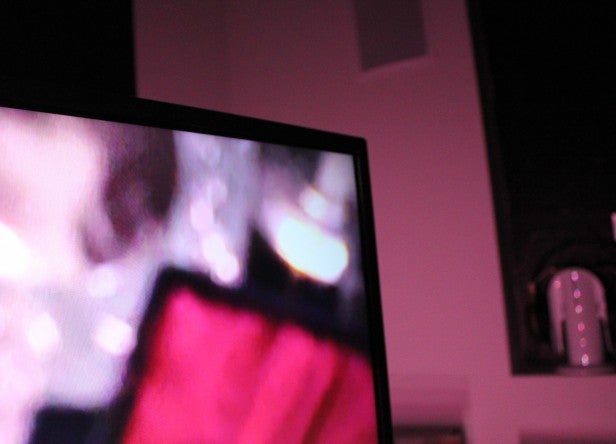 Smart functionality comes via Google’s Android TV platform. Unlike Sony’s Android TVs, which are bolstered by YouView, this is a stock implementation with a curated Philips content shelf.

The 55PUS6401 also provides a jumping-on point for Ambilight, included here in a basic two-channel stereo guise. Just place the TV near a wall for a garish light show. Ambilight can be set to follow on-screen video or audio dynamically, or you can opt for a solid colour wash in either Red, Green, Blue or White.

The latter provides a helpful bias light for a more relaxed viewing experience. While a plain white wall is ideal, there is some wall colour correction offered. You can also integrate the TV with a Hue smart lighting system – it’s quite something to have all the lights in your living room pulsate when playing Rocket League!

This Philips doesn’t support 3D, so if you’ve invested heavily in 3D Blu-rays then this could be a deal-breaker. 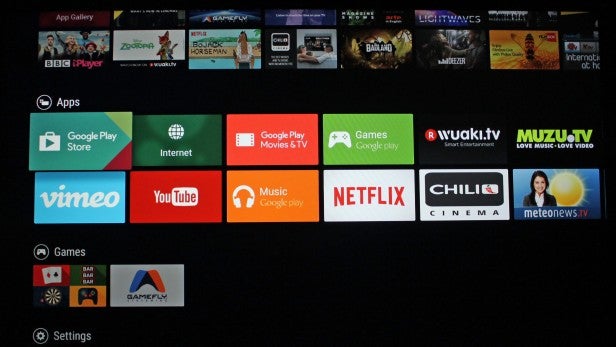 With the TV fed 4K content, the 55PUS6401 looks crisp; UHD movie downloads from Sky bristle with detail. It’s worth noting that Philips Pixel Plus Ultra HD processing can exaggerate grain (most noticeable on Natural and Standard picture presets), so the Movie mode is actually the better viewing option here, particularly when watching gritty action such as Daredevil (Netflix 4K).

Colour performance is rich and vibrant, if not always natural-looking. Reds have a tendency to look a little orange. Backlight uniformity is poor. There’s clearly light pooling around the edge of the screen.

Black levels are also limited. Behind the glass, Philips’ Micro Dimming Pro system analyses 6400 zones. However, in a fully dark room, the screen stalls at grey rather than reaching true black, and shadow detail is compromised. However, during normal viewing in a brightly lit room, this limitation and those light puddles tend not to be noticeable. 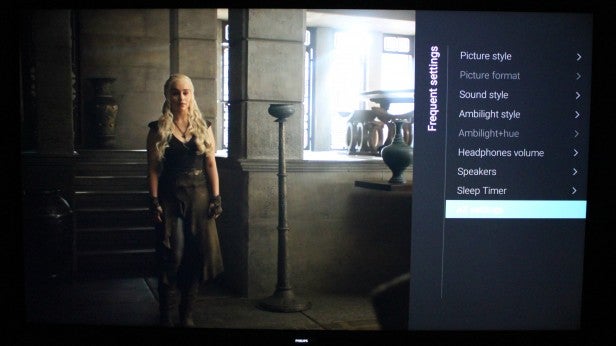 Motion clarity isn’t a strong point, either. Natural Motion processing can be used to minimise panning judder. For the best results, stick with the Minimum setting. Anything stronger introduces ugly artefacts around moving objects.

The set’s HDR compatibility is relatively low level. Given that the 55PUS6401 has a screen brightness of just 350nits, you’re not going to experience the same realistic highlights seen on high-end screens capable of 1000 nits plus. However, the image does look balanced and is capable of a reassuring twinkle.

There are a variety of HDR viewing modes, including a welcome low-latency HDR Game option.

Audio performance is marginally better than grim. There’s no shortage of welly, but the sound is sharp and strident. It isn’t a pleasant listen, and you’ll want to budget for a soundbar to alleviate the pain. 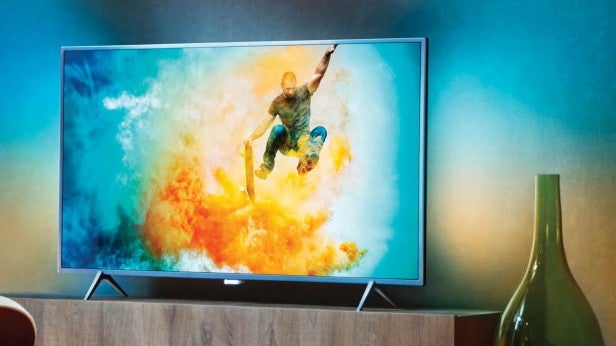 When it comes to value for money, this 6-Series model really can’t be faulted. The screen looks generally fine with Sky Q UHD content and 4K Blu-rays, offering delicious detail and texture. The caveat is a limited black level, which shouldn’t surprise given the asking price. The sweetener is Ambilight, which remains a terrific lifestyle embellishment.

Overall, the 55PUS6401 can be considered a classy-looking budget UHD big-screen that boasts a spec that seems nigh on irresistible for the price. But while HD and 4K images are crisp and involving, don’t expect profound blacks or high impact HDR – and just two HDCP 2.2-compatible HDMI inputs is downright stingy.

Still, Netflix and Amazon 4K are welcome attractions, and Ambilight is a psychedelic crowd-pleaser.

There are many reasons to buy this TV, but they don’t include proper blacks and HDR performance.