So is the combination of Philips’ processing and OLED’s legendary black-level performance a match made in heaven? For the most part, it is.

Even though I’ve tested dozens of OLED TVs, the technology’s ability to deliver incredibly deep black colours – free of LCD’s greyness, light haloing and light striping problems – never grows old. Especially when this peerless black-level response on the 55POS901F/12 is joined as it is by impressive stability and subtle greyscale management.

In Exodus: Gods and Kings, ultra-dark scenes – such as the night-time chat between Moses and Nun in the latter’s torch-lit hut – are clearly better handled by the 55POS901F/12 than they are on LG’s OLED TVs, in three ways.

There are more subtle gradations visible in the darkest areas, making them look more natural and less “hollow”. There’s much less fizzing noise and tonal blurring in background areas. And finally, there’s no sign of the black blocking that afflicts some of LG’s 2016 OLED TV output during this difficult scene. 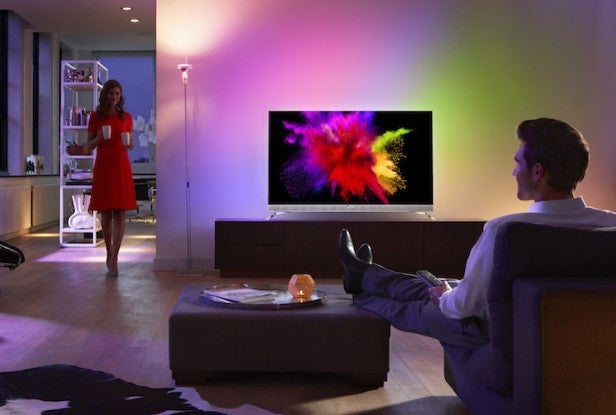 Better handling of near-black picture information isn’t the only area where the 55POS901F/12 outguns LG’s OLED sets, either.

With the surprisingly effective Ultra Resolution feature active, the Philips OLED pictures are markedly crisper, and as a result appear more detailed – more “4K”. This is a potent attraction in itself, but the sharpness also seems to be connected with the image’s contrast, meaning that there’s a more defined sense of HDR light peaks than you get with LG’s OLEDs.

As well as helping HDR highlights such as bright skies, flickering torches and explosions look more natural, this apparent raised brightness also means that dark objects against bright backgrounds are less likely to look like silhouettes than they are on LG’s OLEDs.

While the 55POS901F/12’s colours don’t necessarily look more vivid than those of LG’s OLEDs, they do look beautifully authentic. I also noticed that the Philips’ colours were less liable to “break up” in difficult areas of transition, such as the unusually defined and heavily filtered striations of colour often visible in the skies of Mad Max: Fury Road.

The 55POS901F/12’s motion handling is yet another area of relative strength for Philips’ OLED debutante.

With Perfect Clear Motion active, there’s strikingly little judder or blur, yet movies still look natural rather than unnaturally smoothed out. If you’re obsessed with not losing a pixel of detail during camera pans and movement across the screen, you can trial the Perfect Natural Motion circuit on its medium or high setting.

For me, however, this leaves pictures looking uncomfortably fluid, and also causes smudgy halos around moving objects. 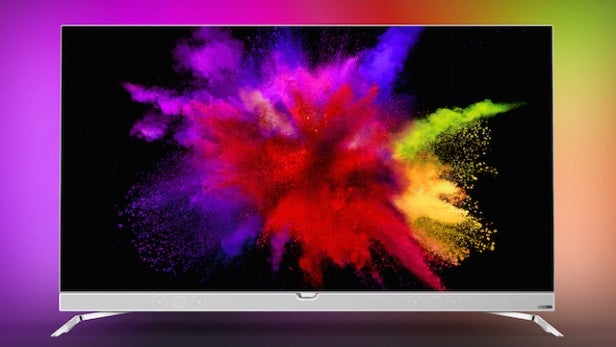 The 55POS901F/12 joins LG’s OLED TVs in providing a much wider viewing angle than you get with LCD screens before colours start to de-saturate and contrast drops off.

First, while HDR images look slightly brighter than those of LG’s 2016 OLED TVs, they clearly don’t get as bright as LCD HDR heroes such as the Sony 65ZD9 and Samsung KS9500 series.

This means that, on occasion, dark objects look a little too dark for comfort – especially when appearing against bright backdrops. There’s also more clipping of subtle shading information in the brightest areas – although I’d say that here, again, the Philips set handles clipping better than LG’s OLEDs.

The Ultra Resolution feature very occasionally causes a slightly fizzy look over areas of very fine detail, such as the plates in the Pharoah’s armour in the opening scenes of Exodus: Gods And Kings. Yet I wouldn’t recommend turning the feature off, as doing so softens the image considerably, reducing its sense of depth.

The 55POS901F/12’s slightly glossy screen reflects in-room light a little more than I’d ideally like, too. But my biggest concern is the occasional appearance of banding noise in areas of subtle colour blends.

In Exodus: Gods and Kings, during the sequence where Moses arrives and then sleeps on at the edge of the Red Sea, the skies on show are renowned for showing up banding problems with TVs. They certainly catch out the 55POS901F/12, using both a 12-bit feed from a Panasonic UB900 Ultra HD Blu-ray player and a 10-bit feed from a Samsung K8500.

The 55POS901F/12 is far from the only HDR TV to be affected by colour striping in certain scenes. The issue really doesn’t show up all that often, and when it does appear, it isn’t as aggressive as I’ve seen on some rival TVs. Especially if you’re not using colour enhancement. 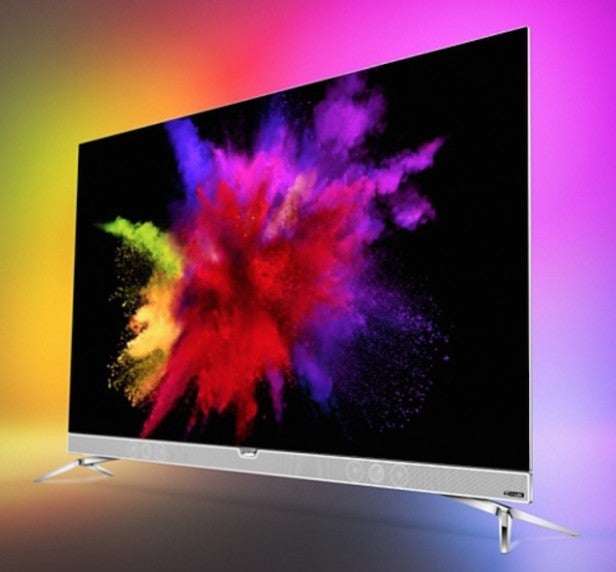 Turning to HD, standard dynamic range content, the 55POS901F/12 gives a strong account of itself. Pictures appear more like 4K than HD once the upscaling engine has done its work, but without looking forced or noisy – provided you keep the sharpness setting reined in.

The upscaling also does a good job of introducing more colour resolution, so that the extra sharpness doesn’t cause areas of similar colour to look monotone or plasticky.

Not everyone will agree with me on this, but I also think kudos is due to the HDR Upscaling option found in the advanced Contrast menus. Philips shows unusual restraint by not being too forceful with this feature. It expands the contrast range of SDR sources slightly in both directions (deeper blacks and brighter peaks) without leaving the image looking gaudy, noisy or unrealistic.

There are some, of course, who will never tinker in this way with a Rec 709 “SDR” image. But if that sounds like you, I reiterate that HDR Upscaling is an option, and not something you’re forced to use.

The 55POS901F/12 accompanies its pictures with a strikingly robust audio performance. The front-firing soundbar delivers a direct and engaging sound, free of the muddiness generally associated with the down-firing speaker systems found on many flat TVs.

There’s plenty of volume, dynamism and detail, and while bass doesn’t rumble quite as deeply as I’d like, it still injects more low-frequency impact than such a slim TV would typically display.

Dialogue is consistently clear and convincing, too – although, occasionally, there did seem to be a very marginal amount of lip-sync error that the TV’s own settings couldn’t solve.

One last key aspect of the 55POS901F/12’s performance is gaming lag, which is best described as so-so. I measured it at just over 50ms in the SDR and HDR game modes, rather than the sub-30ms that online gamers would prefer.

The 55POS901F/12 is built on a 2016 OLED panel rather than a 2017 panel unveiled at the CES, which will start to appear in new LG and Sony models in the coming months. Inevitably, it also doesn’t hit the same HDR-friendly brightness levels as leading LCD TVs such as the Sony KD65ZD9BU and Samsung UE65KS9500.

You can currently get LG’s OLED55B6 and even OLED55E6 rivals for £1,750 and £2,500 respectively, both of which undercut the Philips OLED and add Dolby Vision HDR playback. The E6 delivers 3D playback too.

However, at the time of writing, the 55POS901F/12 is the best OLED TV you can buy. Philips’ processing unlocks more potential from LG’s OLED panels than LG itself, while Ambilight and a lovely metallic design are both great additions to the OLED design landscape.

Despite some occasional banding issues and slightly high input lag, the 55POS901F/12 is a triumphant OLED debut from Philips that proves just how important video processing is to the picture quality story.