Until you’ve followed the set up tips outlined in the previous section, the 55PFS6609’s pictures are quite disappointing. Black level response isn’t as impressive using the Standard default picture setting as we would hope for from a direct LED TV, with obvious slightly luminous greyness hanging over dark scenes and a colour temperature so cold it makes dark areas look blue.

Plus most of the processing options are set too high, leaving you with a picture that looks noisy, unnatural and ‘tampered with’.

Thankfully following our set-up rules improves things massively. For starters, taking Movie as your starting preset produces a much more satisfying black level response. Indeed, the black level situation goes from barely average to excellent, with almost all traces of the grey mistiness disappearing to be replaced by an actually stunningly deep black level response – one that’s at least as good as the best efforts we’ve seen so far this year from Samsung and Sony. 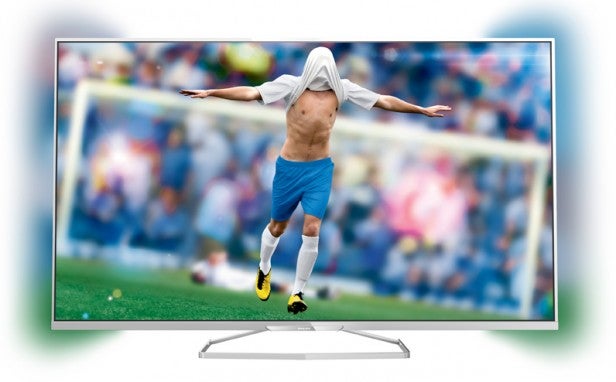 There are no obvious issues with clouding either, as the intensity of the black levels remains consistent in every part of the screen. We did see some clouding – or perhaps it would be better in this instance to refer to them as unnatural luminance – problems using the same more aggressive presets that deliver the less impressive black levels, but these pretty much vanish with the Movie mode in play. Even when you’re watching a predominantly very dark scene which contains a few bright elements.

Also great to see is that the picture’s overall brightness level stays very stable if you’ve got the Dynamic Contrast mode set no higher than Minimum, and the Contrast Mode set to Standard.

And there’s more, for the 55PFS6609’s use of a direct LED lighting system helps it produce much more dynamic-looking dark scenes where the brightest parts of the picture look eye-catchingly luminous and punchy thanks to the set not needing to compromise its overall brightness as severely as an edge LED model generally would have to to produce a good black colour.

This ability to keep the brighter elements of predominantly dark scenes looking vibrant also means the Philips 55PFS6609 does extremely well when it comes to retaining natural tones and lots of tonal subtlety when showing very dark colours. Even more importantly, it means the 55PFS6609 reproduces much more shadow detail in dark scenes than many rival sets, so that dark scenes sit much more consistently alongside bright ones, especially when it comes to perceived depth of field.

Shifting our focus away from dark scenes, the 55PFS6609 also looks vibrant and reasonably bright with lighter content, though it doesn’t deliver quite as much raw luminance as some of the new panel designs we’re starting to see from Samsung, Panasonic and Toshiba.

Bright sequences also confirm something we’d started to feel aware of while focusing on dark content: that the screen’s native motion handling is impressive, with minimal judder or blur.

When we say ‘native’ motion handling, we refer to the way pictures look without HD Natural Motion in play. You can certainly boost clarity if you do employ HD Natural Motion, but given the unwanted artefacts this can cause it’s important that the 55PFS6609 looks so clean and crisp without it.

Philips TVs have long been renowned for the startling sharpness of their pictures, and the 55PFS6609 follows the trend – with finely detailed knobs on. In fact, the 55PFS6609’s pictures are perhaps the sharpest Philips has ever produced (excluding its 4K sets, of course), giving good quality Blu-rays a sense of pixel density that borders on 4K at times. Despite the fact the set definitely only carries 1920×1080 pixels.

While this startling sharpness may well win the 55PFS6609 many admiring glances in shop environments, though, it’s perhaps a tad too aggressive for a home environment. For even with the crazy Super Resolution feature deactivated and the sharpness setting pushed right down to zero pictures can still sometimes look a touch gritty – at least if they contain a little inherent noise anyway.

Strangely the sharpness issue doesn’t crop up significantly with upscaled standard definition playback, which actually look quite clean – especially if you use the NR circuits on their lowest settings, which we’re less against using here than we are with films.

It’s important to stress, too, that the HD over-sharpness impact reduces the further from the screen you get, to the point where from a fairly typical UK living room viewing distance it goes from ‘quite’ to ‘marginally’ distracting, while the strong sharpness helps pictures look more detailed than they generally would on an HD TV viewed from such a distance.

So in a typical viewing environment the impression of overall excellence from the 55PFS6609’s pictures remains intact. Also the extreme sharpness pays handsome dividends with very noiseless film transfers of the sort Hollywood generally favours these days.

Used as the main TV for the review period
Tested for more than a week
Tested using industry calibrated tools, discs and with real world use
Tested with broadcast content (HD/SD), video streams and demo discs
Previous
Philips 55PFS6609 Review Next
3D, Sound and Conclusions Review