The Philips 55PFS6609 is a full HD 55-inch TV equipped with a dual-core processor, an ultra-slim aluminium chassis, and a two-sided incarnation of Philips’ exclusive Ambilight technology, which uses LED to create ambient light with a similar hue and intensity to what’s on-screen. 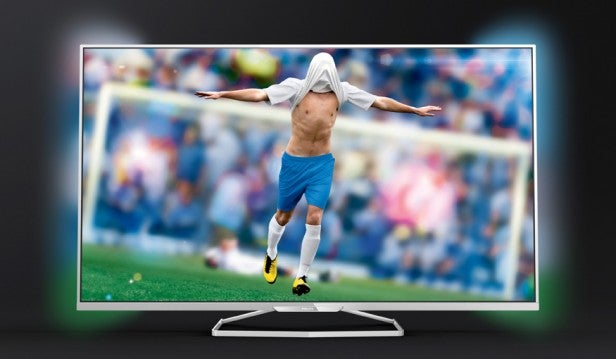 The 55PFS6609 is a seriously gorgeous TV. Its polished aluminium finish, ultra-slim bezel, striking gloss white rear and remarkably minimalistic open stand all set it apart from most of its current rivals. Especially when you also throw into the mix the not at all insignificant matter of Ambilight.

This exclusive Philips technology finds – in this instance – rows of LEDs mounted on the TV’s rear left and right sides able to emit light that matches, with remarkable accuracy, the colour content and intensity of the pictures you’re watching.

This year there are some significant extra features associated with Ambilight too. The most fun new feature is the football mode which, in conjunction with the Ambilight TV app for iOS and Android, illuminates the wall behind your TV with the colours of your chosen country flag and flashes in celebration when your team scores. Awesome! 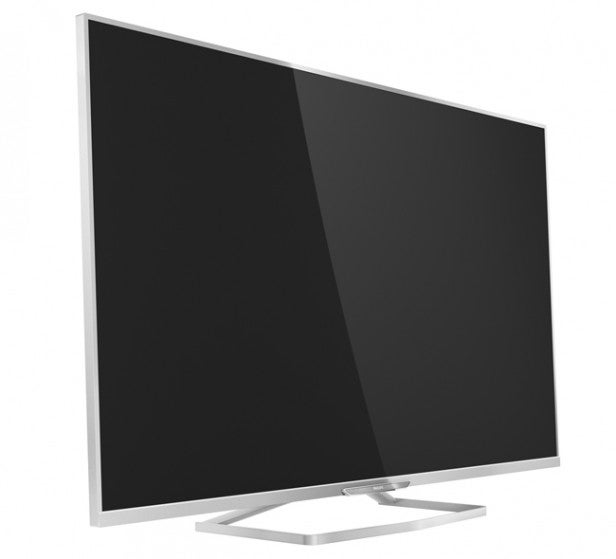 There’s also a welcome new Gaming Mode, which improves Ambilight dynamics so the system can track even the most rapid of action scenes. And finally most of Philips’ new Ambilight models carry the Ambilight hue feature built in (without the need for tablets or smartphones), enabling you to combine Ambilight with Philips’ Hue remote-controlled lightbulb system.

Ambilight hue is brilliant fun and so long as you don’t use it on too high an intensity level, it really adds another dimension to your viewing experience.

Having ticked pretty much every design box, the 55PFS6609 also offers an interesting feature combination. The most striking discovery is that despite its super-slim design the set uses a direct LED lighting system – where the LEDs sit behind the screen – rather than the edge LED system we would have expected. In fact, remarkably, every set from the 6609 series down in Philips’ new range uses direct LED systems.

Historically, direct LED lighting systems have delivered superior contrast performances to their edge LED counterparts. This one, moreover, is supported by a Micro Dimming Pro system that divides the picture into thousands of small sections for more accurate analysis by – and thus more accurate results from – Philips’ image processing systems. The Pro bit indicates, moreover, that the picture optimization system can also run in conjunction with an ambient light sensor built into the TV.

Please note, though, that Micro Dimming Pro doesn’t deliver any local
dimming, where separate sections of the LED lights can be controlled
individually. 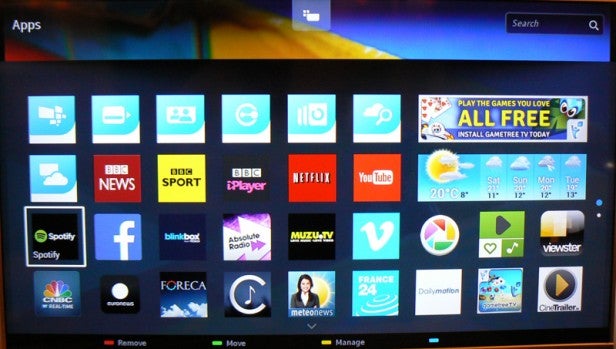 The 55PFS6609’s processing systems are built around the combination of a dual-core ‘brain’ and Philips’ Pixel Precise HD engine. Given that the 55PFS6609 sits pretty high up in Philips’ range – especially as the 8000 top-end series are not being brought to the UK – it’s perhaps surprising that the 55PFS6609 doesn’t carry Philips’ top-line Perfect Pixel HD engine. But there’s actually a pretty simple answer as to why Philips has applied its step-down processing engine to the 55PFS6609: price.

Philips is convinced the most important thing it needs to achieve this year on its long road back to AV recovery is price competitiveness with its cut-throat rivals. And so the 55PFS6609 can be found selling right now for £1,200 – a very fair price for a TV that looks as great and carries as many features as this Philips model.

It’s also important to stress that Pixel Precise HD is hardly some ‘back to basics’ engine. It includes elements designed to tackle almost every element of picture quality, including contrast, colour, sharpness and motion reproduction, all of which can be adjusted – or deactivated – to suit the demands of a particular source and your own tastes.

A combination of the set’s scanning backlight, natural 100Hz refresh rate and frame interpolation, meanwhile, delivers a pseudo 400Hz effect, while the TV’s 3D playback is based around the full HD active system, with two pairs of free glasses provided.

Connections on the 55PFS6609 comprise four HDMIs, two USBs (which support both recording from the Freeview HD tuner and playback of photo, video and music multimedia from USB storage devices), and both LAN and integrated Wi-Fi network options for streaming from networked PCs or going online with the latest Philips Smart TV system.

We’ll look at this system in detail in a future separate article, but we’ll quickly say here that it’s a solid improvement over the very content-light and rough and ready-looking system from 2013, running much quicker and looking a whole lot prettier. The system is capable of learning your viewing habits and recommending content accordingly, and there seems to be more content too, with highlights of BBC News/Sport/iPlayer, Netflix, YouTube, Spotify and Blinkbox. There’s still no 4OD, Five Demand, ITV Player or Amazon Instant/Prime at the time of writing, though.

The initial set up routine that kicks in when you first switch the 55PFS6609 on is pretty decent, to a point. It guides you through source connection, tuning and network connection quite nicely, though things get a bit strange with the small section at the end where it tries to help you get pictures to your tastes. In short, we didn’t entirely feel sure what we trying to accomplish here, and the control system involved is also rather odd.

As ever with Philips TVs you need to take care with the settings for its processing tools. Certainly you should only use tools like a the dynamic contrast system, noise reduction systems and, especially, the HD Natural Motion systems on their lowest power settings at most, and you may find you prefer to turn some or even all of the processing tools off with certain types of footage.

Certainly noise reduction has no place in an HD picture in our opinion, and the HD Natural Motion while useful for some broadcasts can also be problematic with films, where even the lowest setting can cause some unwanted side effects like flicker and shimmering halos around moving objects. 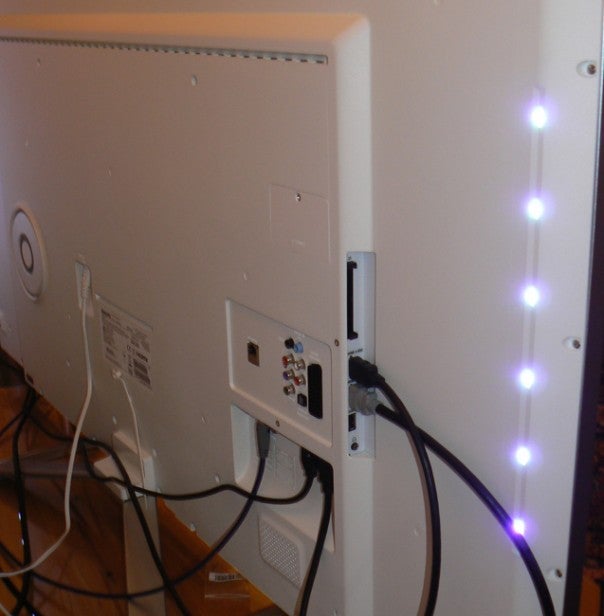 The notion of adjusting processing elements on a per input and even a per programme basis obviously doesn’t make the 55PFS6609 the easiest TV to use. But in truth it’s not as complicated as it sounds, and our experience in the end was that we only really felt the need to make changes relatively rarely – mostly when watching films.

We would say, though, that we often found ourselves wishing that Philips organized its basic picture controls in a more straightforward backlight/contrast/colour/brightness/sharpness list format rather than dividing these core settings up into separate areas.

Our main recommendations are that you turn off the Super Resolution feature (which generally just turns sharpness into noise) and, if you’re watching a grainy film, that you turn the sharpness down maybe even all the way to zero. Plus if you become aware of aggressive shifts in the picture’s overall brightness level try adjusting the ‘Contrast Modes’ feature to Standard or even off rather than using the Best Power and Best Picture options, and make sure the Dynamic Contrast feature is set to minimum or again turned off.

We didn’t find the set’s presets particularly helpful either, with each provided option only treatable as a ‘starting point’. For instance, the Movie mode does a decent job of optimizing backlight levels and colour temperature for film viewing, but it also leaves far too much noise reduction on, along with the Super Resolution feature which plays havoc with any film that’s got a bit of natural grain in it.

From this it’s clear that usability remains an area Philips needs to work on, as the effort required to optimize picture quality – at least with films – remains higher than it should be. Especially in a world where 90% of people apparently never adjust their TVs again once the initial installation has taken place.

One final point to add here is that the TV is equipped with day and night ‘ISF’ presets so that a qualified ISF calibrator could be paid to come round and do all the tricky set up work for you, on a per-source basis. This will cost you anywhere between £250 and £450 though.