Having been exceptionally late to the 2012 TV party, only delivering sets in force from August/September, Philips isn’t about to make the same mistake again this year. In fact, the first of Philips’ 2013 TVs is sat atop our test benches at this very moment.

The Philips 55PFL7008 is a high-end model, too. It sits just one notch below the PFL8008 series that’s going to be Philips’ flagship new range for most of the year. It lives up to this high-end status thanks to an exceptionally slender, polished steel frame and Philips’ Ambilight system, which casts coloured pools of light out from the TV’s edges. 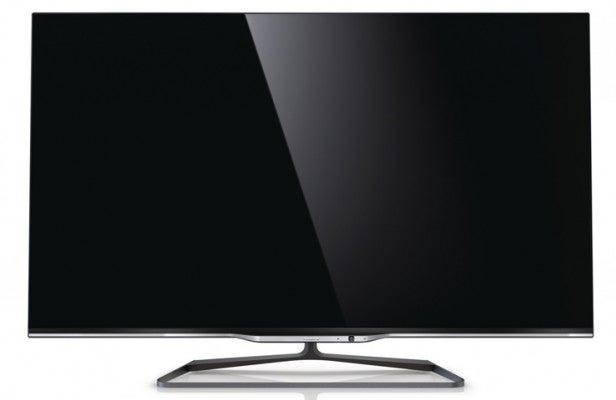 This colour ‘halo’ can be set to match the colour content of the image you’re watching, or it can be set to output just one colour. There’s even an ISF Ambilight setting, designed in conjunction with the independent Imaging Science Foundation group, to provide the optimal light Ambilight tone for serious film watching. This should silence AV enthusiasts who still wrongly think Ambilight is nothing but a gaudy gimmick.

The Philips 55PFL7008’s bottom edge is a bit wider than the other three edges, but there’s an excellent practical reason for its extra size as it lets Philips build a camera into the TV. This doesn’t support any of the gesture controls you get with Samsung’s TVs, but it does let you use Skype without an external camera. There’s a mic tucked away next to the camera, too.

You can turn the camera off if you’re worried about the eyes of prying hackers invading your room, though the mic is always active.

The Philips 55PFL7008’s connections are as extensive as you would hope of a relatively high-end TV. Four HDMIs are on hand for digital video connection duties – including 3D sources – and intriguingly there’s a satellite input as well as the expected Freeview HD RF input. However, this satellite port isn’t compatible with Freesat, so it’s of limited interest to UK users.

Multimedia features are supported by a VGA PC port, three USBs, a LAN port, and built-in Wi-Fi. The set even supports Miracast, so you can mirror your Android 4.2 (or later) mobile device to the TV’s screen without needing a router.

The Philips 55PFL7008’s remote control has a full QWERTY keyboard on its rear to aid inputting text into the built-in Web browser or social media apps. Also, rather handily, it supports a Nintendo Wii-style technology whereby you can simply point it at the screen to select your desired onscreen options.

A revamped MyRemote app for iOS and Android device, meanwhile, permits you to stream footage from the digital tuners to your smart device, send multimedia on your smart device to the TV screen, and control your TV – including inputting text – via your smart devices’ touchscreen interfaces.

Philips has also tweaked the interface for its Smart TV platform, including, most significantly, introducing a ‘learning’ system whereby the TV will recommend on-demand film titles based on your previous viewing tendencies.

The recommendations system is metadata based and uses both your household’s TV viewing and your on-demand viewing to build up your recommendations At present, however, this ‘learning’ feature only works on the Acetrax film service. Even worse, neither LoveFilm nor Netflix are available. Netflix is due to arrive towards the end of May/early June, thankfully, and LoveFilm too is apparently incoming, though no firm date is available for that yet. Hopefully when they do arrive they too will be supported by the Recommendations engine.

Acetrax is joined by BBC iPlayer, YouTube and Blinkbox, while other apps include Twitter, Facebook, Picasa, Absolute Radio plus, as noted before, Skype. But this is still a short list compared with what’s some rivals offer – Samsung TVs, such as the Editor’s Choice Samsung UE40F8000, have all four terrestrial catch-up TV services, Netflix and LoveFilm – read our Samsung Smart TV 2013 review.

The interface is rather sluggish, too – painfully so, at times. This
suggests that it’s stretching the 55PFL7008’s dual-core processing to
its limit. Some of Samsung and Panasonic’s latest smart TVs have moved
to quad-core to avoid such frustrating delays.

As we’ve done with Samsung and Panasonic’s latest interfaces, we’ll
be doing a separate feature on the full ins and outs of the new Philips
SmartTV platform in the coming days.