This will fill some people with horror, we know. But the key point is that Philips has provided control over almost every part of its picture processing systems on the 55PFL7007T, including being able to turn them all off if that’s your wish.

So drastic an approach is not something we’d recommend, though. While some of the processing elements can cause problems like softness, too much motion fluidity and and image lag (especially at the upper levels of their operating ‘power’), others can boost motion clarity, colour tones and contrast. The trick is to devote time upon first getting a 55PFL7007T to understand what each of the processing options brings to the party, and experimenting with different settings on different types of content until you arrive at the best settings for your tastes. 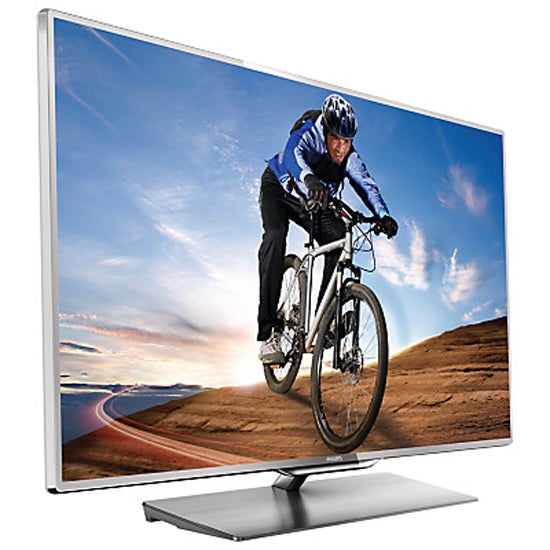 This sounds like a hassle. But in reality the process needn’t take long, and rather handily your efforts are rewarded by predominantly outstanding pictures.

Terrific contrast
Particularly impressive is the image’s contrast range. On the one hand an extremely potent light output helps bright, colourful scenes look gorgeously explosive without tipping over into the realms of the unnatural, while on the other hand the set delivers some of the deepest, richest black level responses we’ve seen on a 55in edge LED TV.

In other words, black parts of images actually look black, rather than grey as they often do on edge LED TVs. Certainly they’re in a different league to the rather washed out efforts recently witnessed on Toshiba’s 55WL968.

Clever light handling
What’s particularly brilliant about the 55PFL7007T’s contrast performance, though, is that the really deep blacks can co-exist in the same frame with really rich colours and bright whites. Even though the set doesn’t employ a local dimming engine, it’s clever enough with its light manipulation to strike a much better light supply balance than the vast majority of similarly priced rivals.

As well as helping pictures look superbly dynamic in dark as well as bright scenes, this outstanding light management also means you get to see way more shadow detail in dark scenes than usual with LCD TVs, giving them a much more believable sense of depth and ensuring they don’t feel like the ‘poor relation’ to bright scenes. Furthermore, so long as you stick with the ‘Standard’ mode of the 55PFL7007T’s active backlight feature, it delivers its finely judged contrast balance without distracting you with many over-obvious brightness ‘shifts’.

As is usually the case with TVs that score highly for contrast, the 55PFL7007T also excels with its colours, which are gorgeously saturated but also exceptionally subtle when it comes to picking out the tiny tonal shifts you need to portray to make colour blends look smooth rather than ‘stripey’. Skin tones look credible at all times too.

Unusually sharp
Yet more good news concerns the Philips 55PFL7007T’s sharpness when showing HD footage. As well as delivering all the detail from top Blu-rays we’d hope to see on any self-respecting full HD television, the image enjoys an extra layer of crispness beyond the TV norm. This is especially true if you leave the provided Advanced Sharpness feature, though actually we preferred to leave this switched off, as it made the picture look too gritty and edges look stressed.

A key contributor to the 55PFL7007T’s sharpness, we’d argue, is its impressive motion handling. Even without using the set’s Perfect Natural Motion processing there isn’t much motion blur. And what little there is largely disappears if you employ the Natural Motion system on its lowest level – something you can do without the picture suffering badly with such typical motion processing side effects as flickering, and shimmering around moving objects.

Used as the main TV for the review period
Tested for more than a week
Tested using industry calibrated tools, discs and with real world use
Tested with broadcast content (HD/SD), video streams and demo discs
Previous
Philips 55PFL7007T Review Next
3D and Conclusions Review