Premium sound and vision from a pint-sized package? This flagship Philips OLED proves it can be done, combining excellent images with room-illuminating Ambilight and a satisfying Dolby Atmos sound system.

You really can have more for less. This 48-inch Philips is the latest in a wave of downsized OLED screens, designed for those looking for a compact yet premium TV solution.

Of course, if you want a more conventional screen size, the OLED+935 is also available in 55- and 65-inch guises.

The model apes last season’s OLED+934, but offers a number of big AV differences over its predecessor. Most significantly, it utilises the latest generation of Philips P5 picture processor, now the beneficiary of AI to better deliver detail, colour and contrast.

Is this Philips OLED the best-looking TV you can buy right now? Could be.

The combo of sound system and micro-bezel panel is definitely easy on the eye. The Bowers & Wilkins-designed soundbar is neatly attached via a captive lead and fixed to a metal angled arm, which acts as the set’s pedestal stand. There’s an optional wall mount provided, if you prefer. 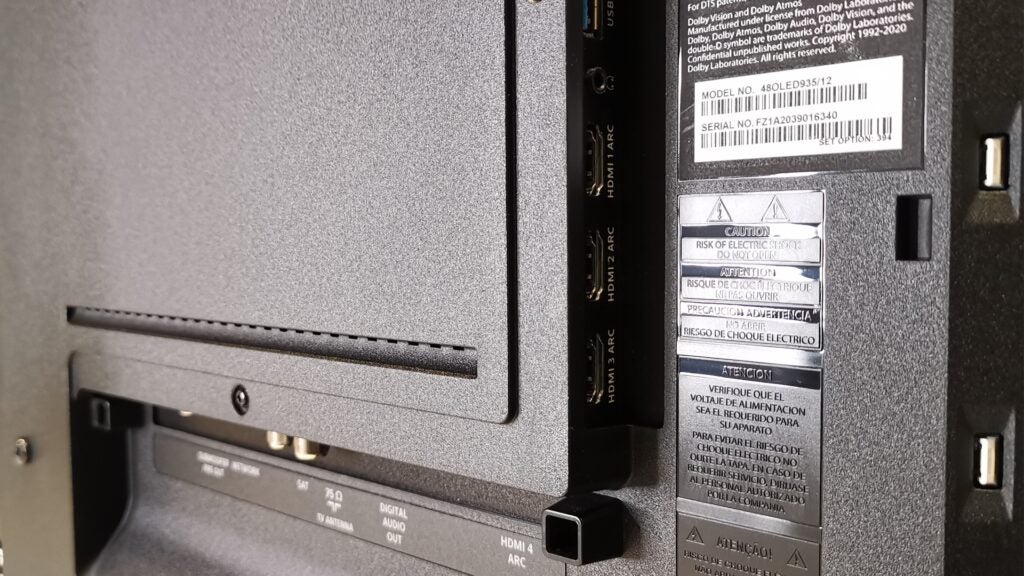 The set ships with a premium backlit remote control with Muirhead leather finish. It comes with dedicated buttons for Netflix, Rakuten TV and Google Assistant.

Connectivity is a tad less remarkable. All four HDMIs are ARC (Audio Return Channel) enabled, and there’s support for 2160p up to 60Hz. There are also two USBs, an optical audio output and Ethernet, plus dual-band Wi-Fi and Bluetooth (v4.2).

The OLED+935 goes to the top of the class when it comes to smart connectivity.  The TV runs the latest Android 9 Pie OS, bolstered by 3GB of RAM, and offers Google Assistant and Amazon Alexa support, with Chromecast built in.

There’s both a Freeview Play tuner and satellite alternative, the former offering a full set of mainstream catch-up services including BBC iPlayer, ITV Hub, All 4 and My5. Streaming options are comprehensive and include Netflix, Amazon Prime Video, Disney+ and YouTube among others. There’s even interoperability with DTS Play-Fi equipment. If you have DTS Play-Fi speakers elsewhere, you can include the 935 in a multi-room audio system.

The OLED+935 wouldn’t be our first choice if console gaming is a top priority, though. We measured input lag at 36.3ms in Game mode (1080/60), which is poor compared to rivals.

When it comes to panel and picture processing, the OLED+935 should be considered a top performer. Inside is Philips’ AI-enhanced fourth iteration of its much-lauded P5 picture processing engine, now empowered with clever algorithms to squeeze the maximum amount of detail from both 4K and HD sources.

This AI silicon uses machine learning to analyse millions of PQ test clips from a database created by Philips over the past 30 years. The result is an image with better overall balance and nuance than, say, a traditional Dynamic mode that simply amps everything up to 11.

Also in the mix is a dedicated AI Machine Learn Sharpness function, an improved AI Smart Bit Enhancement system and an improved version of the brand’s Perfect Natural Reality (PNR) function. It’s quite a convoluted cocktail, but hyperbole aside, it really does deliver pictures that are dynamic and fun to watch. Switch AI off and you immediately notice the lack of pop and snap. 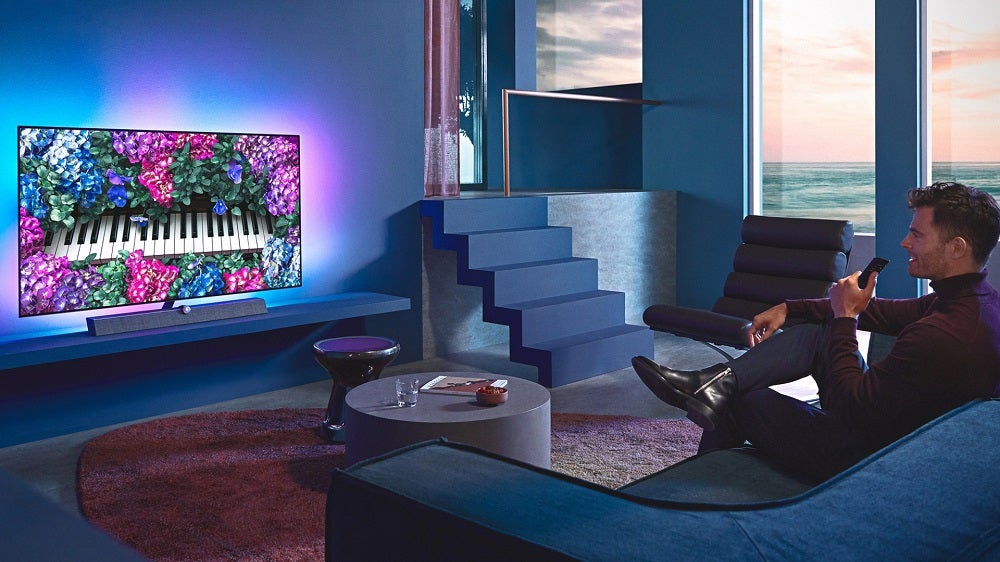 The Dolby Atmos sound system on the 935 is several cuts above the televisual average. It works with Dolby Atmos compatible apps such as Netflix and Prime Video, as well as audio poured into one of the aforementioned HDMIs.

3D audio can come from Blu-ray or via Dolby Digital Plus from a premium pay TV service such as Sky Q or BT TV, both of which use the immersive format for sports coverage – and, in Sky’s case, TV shows and movies.

The distinctive Tweeter-on-Top, mounted in its own chrome metal enclosure, is partnered with a mid-range driver unit, creating a dedicated centre-channel array. 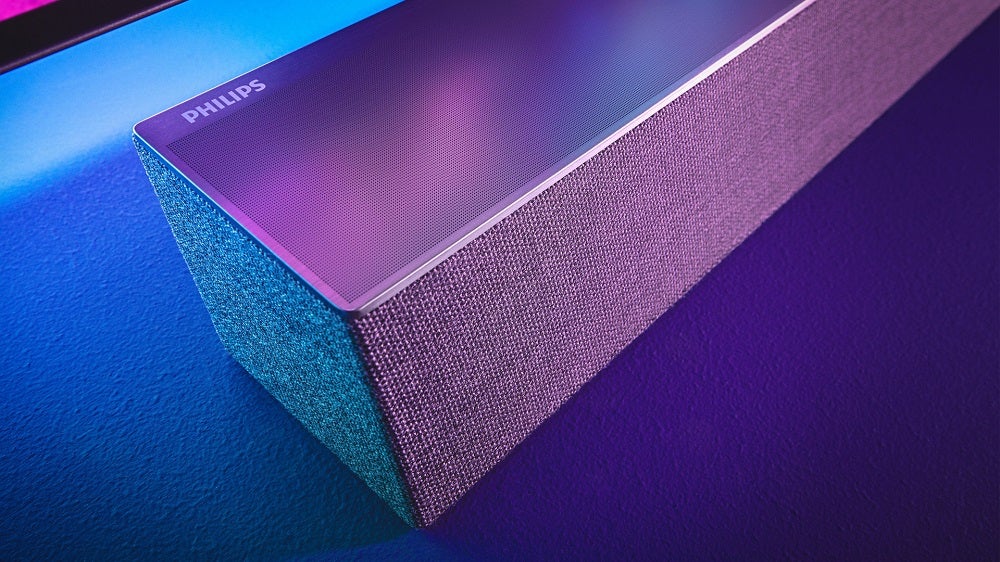 There are also four 50mm mid-range squawkers: two mounted centrally, and one at each end of the speaker enclosure. The OLED+935 also has two 50mm upward-firing Dolby Atmos Elevation units mounted on the top of the enclosure.

Bass is provided by a racetrack-style 100mm x 65mm subwoofer unit, ported to the rear of the speaker enclosure using proprietary Flowport technology. Power output is rated at 70W.

The soundstage images wide and high, with excellent dialogue clarity. There’s some well-rounded mid-range, too. Thankfully, the LFE faux pas of the OLED+934 (it didn’t use Dolby’s .1 channel) has been corrected here.

While the sound system still doesn’t have the wherewithal to drop deep, the LFE channel is at least distributed to other channels, which means we don’t get any unwanted drop-outs.

That bass port starts to communicate at 31.5Hz, but it doesn’t manifest anything meaningful until at least 50Hz.

As you might expect, there’s no sense of 360-degree surround, but this is in line with most Dolby Atmos soundbars that lack rear physical speakers. In Movie mode, the TV up-mixes non-Dolby Atmos so that all its drivers remain in play. The upshot is a consistently large, well-balanced soundstage.

if you want a supremely accomplished OLED in an easy-to-accommodate screen size, it’s an easy recommendation.

Philips’ bias lightning is its own proprietary (and exclusive) tech, and it’s a trump card that’s difficult to resist.

The sound is better than the norm expected from TV,s Philips’ AI-enhanced picture processing is among the best in the land, and the set’s smart suite is first-class.

The entirety of Philips’ TV range lacks next-gen capabilities and latency is slow. For those with PS5s and Xbox Series Xs, perhaps keep clear.

There’s no doubting the Philips’ OLED comes at a premium compared to similarly sized efforts, and you can also get the similarly specc’d 55OLED805 for less.