To say that I’ve been impressed by the majority of Philips’ latest TV range would be an understatement. With the exception of the uncomfortably positioned 42PFL8404, I’ve loved everything the brand has thrown at me recently. So you’ll forgive me if I admit to feeling a tingle of excitement today at the arrival of the largest screen I’ve seen from the new Philips range: the 47in 47PFL9664. 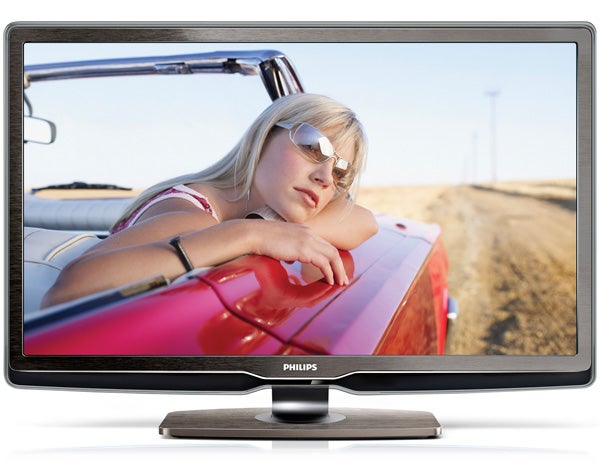 Hopefully the extra screen real estate of the 47PFL9664 will merely reinforce my overwhelmingly positive impressions of Philips’ latest picture engine. Before we get into that, though, I’ve got some salivating to do. For the 47PFL9664 really is damn easy on the eye.


The first thing you notice is the striking and original two-tone grey finish of the sumptuously well built – from aluminium, no less – bezel. Then it hits you how slender this bezel is, both from the front and the side, since the set is only 50mm deep at is fattest point. As with the recently reviewed Samsung UE-55B7020, seeing such slimness attached to such a large screen size merely adds to the innate sense of tech ‘cool’ that all really thin TVs seem to exude. 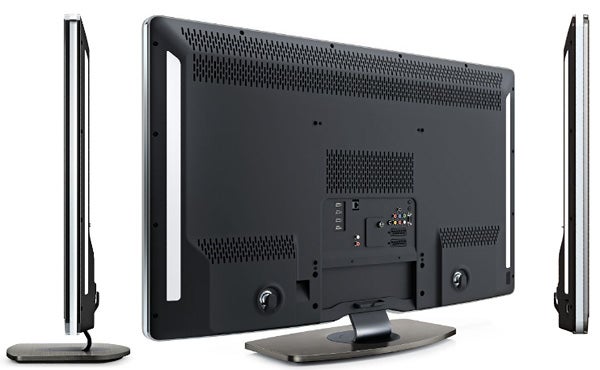 Switching the TV on introduces another key design element, too: Ambilight. Philips didn’t manage to squeeze this trademark feature into its first slimline TV, the 42PES001 ‘Essence’, so it’s really nice to see the familiar pools of coloured light spilling from the 47PFL9664’s sides. Especially since the localised accuracy of these colours in relation to the colour content of the image is even more uncanny than it was on last year’s Ambilight TVs.

Philips’ apparent drive with the 47PFL9664 to make its relatively steep £1,799 asking price look good value continues with the set’s connections. It has five HDMIs, for instance – one more than just about every other brand offers, even on their flagship TVs.


Also key are the 47PFL9664’s multimedia connections. A USB, for instance, provides playback of a bewildering array of different file types, taking in photo, music and video. Plus an Ethernet port allows you to stream in the same file types from a DLNA PC, or access the Internet.

What’s more, as we’ve pointed out enthusiastically before, in Philips’ case, the Internet really does mean The Internet. For a full Web browser has been built into the 47PFL9664, complete with decent text input interface and clearly much-needed parental controls.


I still maintain that Philips ought to reverse its current decision not to launch an optional keyboard and mouse package to accompany its 9000 Series TVs. But as far as remote control Internet navigation systems go, the one on the 47PFL9664 seems about as good as it ever could be. 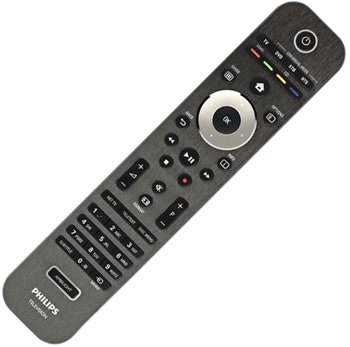 If you do find the Internet surfing system too fiddly, though, Philips has also included a really quite strong package of content providers – including YouTube, Myalbum.com, the Funspot online game service, and the tunin.fm Internet radio service – who’ve set up streamlined versions of their services especially to be easily accessed via a TV remote.


Going back to the point where I said that you used the Ethernet jack to get your 47PFL9664 online, you don’t actually ”have” to use the Ethernet jack. For excellently, the set also features a stable and easy to set up built-in 802.11g Wi-Fi system. Excellent. 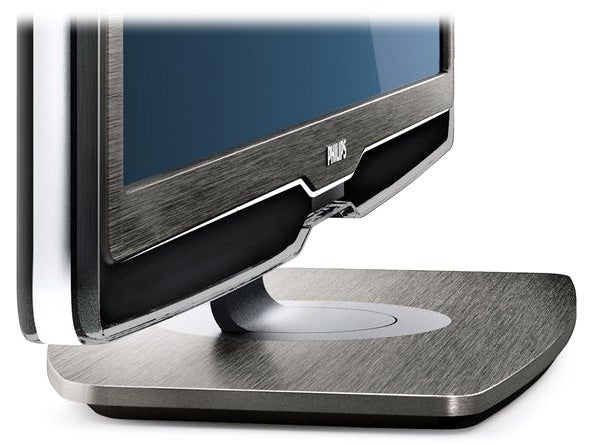 As you may be starting to expect from all the up-front feature extravagance I’ve already uncovered, exploring the 47PFL9664’s onscreen menus is a daunting experience. For they’re stuffed to bursting point with fundamental tweaks, fine tuners and most significantly of all, multi-level processing adjustments.


Why are these processing adjustments so important? Because they provide you with a really quite sophisticated tool kit for ‘taming’ the extremely powerful Perfect Pixel HD video processing engine that drives the 47PFL9664’s pictures along like a Dodge Viper’s V10. 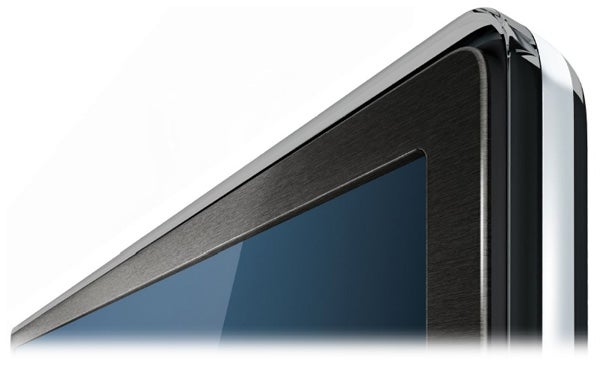 For brilliant though some of the 47PFL9664’s immodestly named processing tricks are – especially Perfect Natural Motion, Perfect Colours, and the set’s standard def upscaling – they still have to be manually tweaked every now and then in order to ensure they’re always working at their best with different types of source material.


For instance, you certainly won’t want to be running Perfect Natural Motion on its highest setting – or even its middle one – when watching sport or action films if you don’t want the processing to generate all sorts of unwanted side effects. Or there’s the way the 200Hz engine can cause a little flickery effect over very fine details, so that you might occasionally want to turn that off too.


Crucially, though, while the raw power of the latest Perfect Pixel HD engine makes the 47PFL9664 a bit more labour-intensive than your average TV, it also has the refinement to ensure that the 47PFL9664’s pictures are nothing short of mesmerising when they’re at their best.

As has long been the case with Philips’ top-end TVs, it’s their extraordinary sharpness that’s arguably their single most eye-catching facet. HD images look stunningly defined and crisp, for a start. But it’s the 47PFL9664’s standard definition pictures which, for my money, truly set a benchmark, containing levels of detail and clarity that no other brand can currently match.


What’s more, this terrific upscaling performance doesn’t come at the price of loads of horrible video noise – this suppression of noise being for me the single biggest improvement Philips has introduced for its latest Perfect Pixel generation. 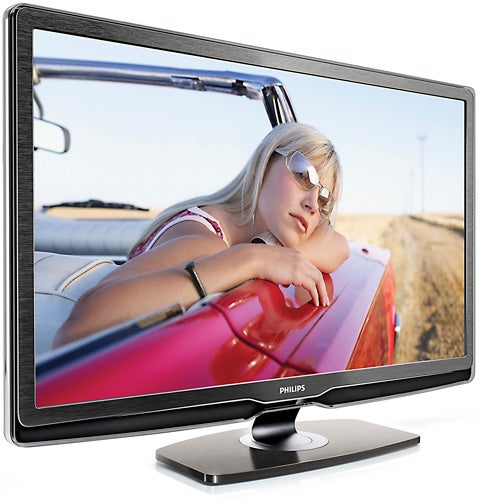 The general sense of clarity I experienced with the 47PFL9664 also owes much to its motion handling prowess. For the combination of the Perfect Natural Motion processing and a ‘200Hz’ (scanning backlight plus 100Hz) system helps to produce the most fluid, totally blur-free moving objects you’ll see on an LCD TV.


Also much improved over previous Philips LCD generations is the 47PFL9664’s black level response. Dark scenes contain really very little of the grey clouding for which LCD technology is generally justly infamed. Yet the black level response isn’t achieved at the expense of too much shadow detail, ensuring that dark scenes look nearly as ‘three dimensional’ as bright ones.


The 47PFL9664 is a chip off the old Philips block when it comes to colours too, combining blisteringly intense saturations with a noticeably wide dynamic range and plenty of blend finesse. The latest tweaks to the colour part of the Perfect Pixel HD engine also seem to help the 47PFL9664 produce more consistently natural tones – a fact reinforced by the impressive colour range now being delivered by the Ambilight system. 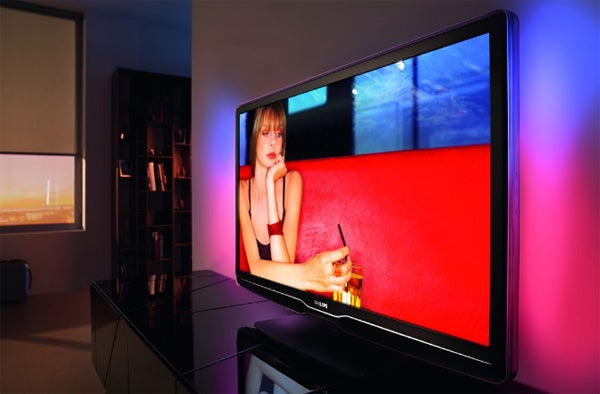 As hoped, the extra size of the 47PFL9664 really does help emphasise just how good the latest generation of Philips picture processing really has got. As ever, though, we have to say that it’s still not perfect. Even after careful calibration, for instance, there’s still the occasional flickery or edge shimmery artefact where the processing can’t quite live up to its own ambitions. But these instances are rarer and less obvious than ever before, leaving all the positives of Perfect Pixel HD even more dominant than they have been in earlier incarnations.


Pictures as good as those of the 47PFL9664 clearly deserve to be joined by some rollicking, home cinema-standard audio. But surely this won’t be the case with the 47PFL9664, right, given how slim it is?


Well, actually the set sounds pretty darned good. For as with other slim sets in Philips’ range, the 47PFL9664 cunningly sticks a couple of subwoofer speakers on its rear, which do a good job of underpinning with some healthy bass the clarity produced by the fore-mounted dome tweeters. There’s an audio lesson here that the makers of all ultra-slim TVs – but especially Samsung – should heed.


The 47PFL9664 looks expensive on paper, there’s no denying that. But by the time you’ve taken its slim design, unparalleled feature count and stunning AV performance into account, it actually starts to look like something of a bargain.