While our undying love for Philips’ Moth Eye Filter technology made the brand’s new Philips 46PFL9707 our personal favourite of its new IFA 2012 announced TVs, the mid-range and thus much cheaper 6900 series is more likely to actually find its way into your living room. It’s also arguably the 6900 series which will give us the best idea of what impact, if any, Philips’ new TP Vision parent company might be having.

Design
Tracking down a 47-inch Philips 47PFL6900 in a relatively quiet corner of the company’s stand, the first thing that struck us was how pretty it is. The dark grey, metallic finish to the bottom edge harmonises beautifully with an exceptionally trim black frame around the other three sides, delivering an overall image that would look at home on a flagship TV rather than a mid-range model. It’s worth adding, too, that the desktop stand is one of the prettiest we’ve seen.

Specs
Spec wise the Philips 47PFL6900 also looks strong for its range position. For starters it’s 3D-capable, using the passive format. It’s also the proud owner of Philips’ Pixel Precise HD processing. This is not as powerful as the Perfect Pixel HD system found on Philips’ flagship TVs, but as we’ll see, it seems to be working very nicely all the same. 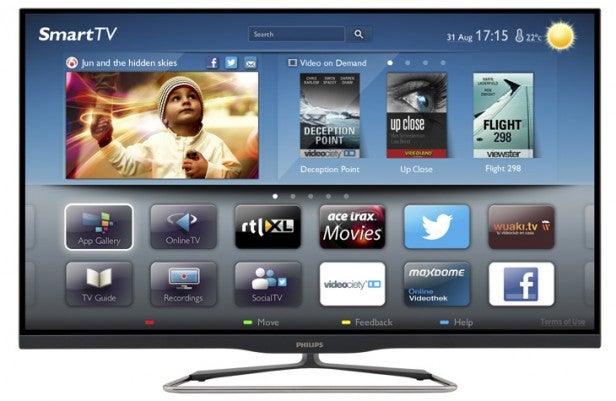 Further bolstered by a dual-core processor, a more content and a much-improved interface, the new Net TV looks set to bring Philips much nearer to the sort of Smart TV systems offered by LG, Samsung and Sony. There are some neat little tricks in the Net TV system too, which suggest that Philips really is thinking about what works and what doesn’t where ‘Smart’ online features are concerned.

For instance, the Twitter and Facebook apps can automatically search for hashtag references to the TV programme you’re watching, so you can access live comments about the show without having to track down the relevant threads yourself. We still have our doubts about wanting to follow and contribute to social media feeds about most live programmes, but we can certainly imagine the system proving popular for relatively lightweight fare like The X-Factor or Big Brother.

Apps
There’s an impressive-looking new search utility too, to help you track online content down, plus there’s support for the new YouTube Movies service. Philips has even recently established a new platform providing free support for TV app developers that should generate a rapid growth in online content. Apparently 300 apps are already in development through this support system, with 50 more already launched. 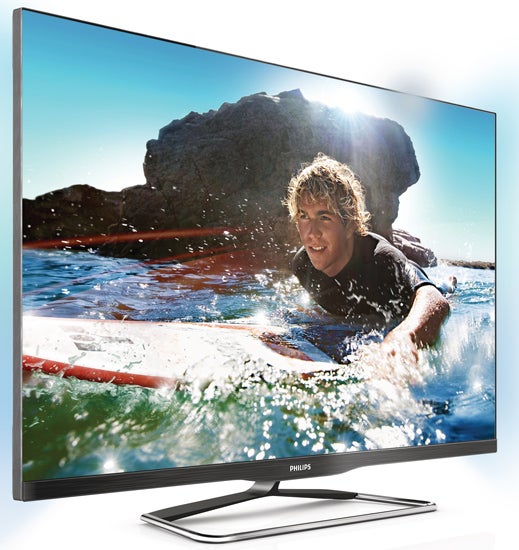 The presentational quality of the Net TV menus is high, and shows plenty of neat organisational and cross-referential touches, making it look like being one of the easiest to use online TV systems to date.

The Philips 47PFL6900 also lets you share the TV’s images with your smart devices, bringing Philips up to speed with similar features offered by some of its key rivals. The iOS version of this new screen-sharing functionality is due to become available within two months, with an Android version due ‘later’.

Picture Quality
Picture quality during our hands-on with the Philips 47PFL6900 on the IFA floor was very strong. Immediately we were struck by familiar Philips strengths of dazzling colours, exceptional detail resolution, outstanding motion clarity for a mid-level model, and the immersive effect of the latest Ambilight system.

Contrast also looked good, though it’s hard to form any serious opinion on the 47PFL6900’s black level depth given the amount of ambient lighting the TV was competing with in its IFA booth.

Processing issues
We did detect a little smearing noise around fast-moving objects and the image generally looked a little processed. But experience suggests that both these issues will likely be fairly straightforwardly addressed by playing around with the multitude of processing options tucked away within the 47PFL6900’s extensive onscreen menus. 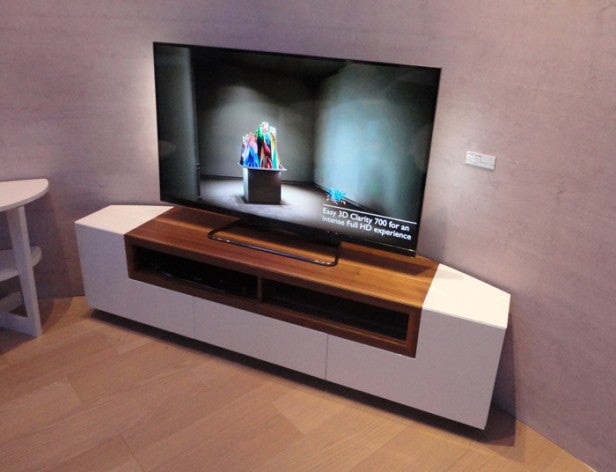 The Philips 47PFL6900’s 3D performance was a bit odd. For while one set looked fine, with bright, clean, reasonably crisp passive pictures (notwithstanding the inevitable jaggies and line structure you get with normal full HD passive 3D TVs), another proved very uncomfortable to watch indeed, suffering lots of double imaging and leaving our eyes feeling strained after even just a couple of minutes.

3D in reverse?
All we can imagine is that somebody had reversed the left/right eye priority option in the troublesome set. But if this is the case, it’s not great that nobody working in the Philips TV department had spotted the problem.

Overall, however, the Philips 47PFL6900 appeared during our hands-on to have every chance of becoming just the sort of hit Philips could do with to ensure that its new TP Vision operation hits the ground running. Look for a full review soon.