With 3D, the Philips 47PFL6008 again impresses. Its innate vibrancy and decent
motion handling combine with good use of the relatively bright, relaxing
passive 3D format to produce crisp, clean, well-delineated 3D spaces
with plenty of colour saturation and practically no issues with
crosstalk ghosting.

It’s a huge relief, too, to see dark 3D scenes appearing with massively less obvious backlight clouding problems than we saw on the 60-inch version of the set. Not having ‘2D’ pools of extra light lying across the virtual surface of dark 3D shots makes them much easier to get immersed in. It’s worth adding, too, that while you can vaguely see the passive 3D downsides of slightly jagged edges and occasional horizontal line structure over bright parts of 3D images, the 47-inch screen is far less revealing of these problems from typical viewing distances than the much larger 60-inch model.

Overall, there’s a strong case to be made that the Philips 47PFL6008 delivers the best all-round picture quality we’ve seen from a passive 3D TV so far this year. Which immediately makes it a seriously tempting proposition to anyone set on buying into the passive rather than active 3D format.

However, even though Philips’ set handles the apparent contrast problems of this year’s passive 3D TVs better than any previous model, there are still a couple of relatively minor flaws you should be aware of. The first is that the Philips 47PFL6008’s pictures can look a little hollow in dark areas thanks to a reduction in visible shadow detailing once you’ve got the picture calibrated to deliver the richest black levels.

Second, if you use the Best For Power backlight and Dynamic Contrast features that help the set deliver its good black levels, pictures can look a bit unstable at times, as the set continually tweaks its brightness levels in a quest to hit the optimum balance for whatever image content is being shown.

One final problem with the 47PFL6008’s mostly excellent pictures is that the screen takes a bit longer to render them than we’d like – around 65ms, even if you use the Game or Computer picture presets and turn off as much processing as you can. This makes the Philips 47PFL6008 flawed as a gaming monitor.

Sonically, the 47PFL6008 is one of the better mid-range TVs in town. This is chiefly thanks to the inclusion on the set’s rear of a fairly significant bass driver that injects some much-appreciated bass into proceedings. Also, though, the main speakers produce good levels of power and clarity, and only start to distort at really extreme volumes. 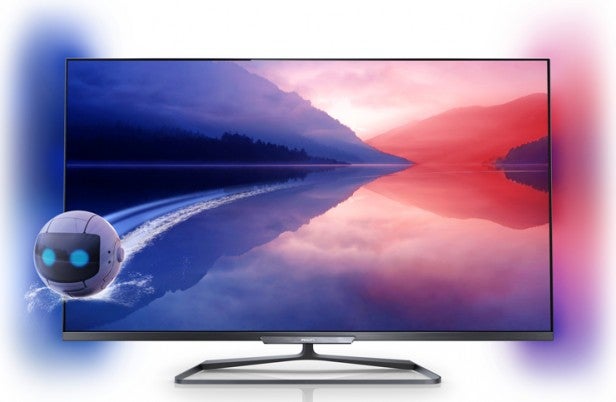 You should certainly think about it. The 47-inch set mercifully avoids almost totally the backlight consistency problems witnessed recently on its 60-inch sibling, leaving you free to enjoy the best contrast performance witnessed on a passive 3D TV this year, as well as rich colours and excellent sharpness. The set’s design is very attractive and slender for a mid-range set too, and there’s some decent audio to keep the strong pictures company.

A little instability with dark scenes may trouble movie fans, though, making the Panasonic P50GT60 plasma look like a tempting alternative, while the input lag should put off any serious gamers. It’s also impossible to ignore the sluggish interface and relative content shortage of Philips’ Smart TV platform, especially when you think about what you now get in this department from Samsung Smart TVs, LG Smart TVs and Panasonic Smart TVs.

This is a very good 2D and 3D TV that stands out for being one of the few passive 3D TVs that delivers decent levels of contrast in dark scenes. For that reason alone we recommend it for anyone who wants a passive 3D set, provided you can see past its sluggish, feature-lite smart TV system.