Turning our focus next to the picture technology at the Philips 47PFL6008’s
heart, the fact that it uses passive 3D technology (four pairs of
glasses are included) reveals it to be using an IPS panel at its heart –
a fact that will deliver a wider viewing angle than you get with other
types of LCD display, but which also raises concerns about the screen’s
potential contrast performance given the issues we’ve spotted with
numerous other passive 3D panels this year.

Images are powered by Philips’ Pixel Precise HD processing system. This is not Philips’ highest level system, but it still extends its operations into almost every part of the TV’s picture reproduction – and Philips sensibly gives you control over the vast majority of its workings.

The set combines a 100Hz panel with backlight scanning to deliver a 500Hz-like motion handling effect, and although the screen doesn’t employ local dimming it does use a micro-dimming system to achieve more sophisticated analysis of incoming video when trying to calculate the best picture settings to use.

One last point we should mention is actually the most obvious:
Ambilight. As with almost every Philips TV these days, the 47PFL6008
uses LEDs mounted down the rear of its left and right sides to cast out
pools of coloured light that can be set to emulate the local colours of
the images being viewed. This can really enhance your immersion in what
you’re watching – so long, at least, as you set the Ambilight control
to a fairly gentle level of responsiveness. 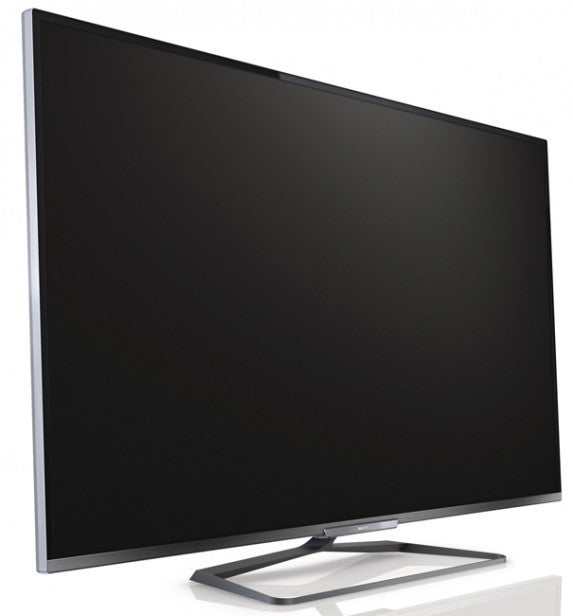 Right, the moment of truth: does the 47PFL6008 fall foul of its 60-inch sibling’s dreaded backlight inconsistency problem? Thankfully, it doesn’t. Or at least, it doesn’t to anywhere near the same extent as the Philips 60PFL6008.

Using a test signal featuring a white central circle against a black backdrop – precisely the sort of image content that will bring backlight inconsistencies out – we noticed only the very slightest sense of extra brightness at the image’s corners on the Philips 47PFL6008 – and this sense almost completely disappears during more regular viewing, even if you’re watching a predominantly dark scene with a few bright bits in it.

It’s worth adding that you do need to be a bit careful with your picture settings to keep clouding minimised. We’d suggest using the Best For Power dynamic backlight option in the Pixel Precise HD menus; having the dynamic backlight set to Minimum; moving the Video Contrast setting down from 100 to around 80-84; and turning off the Light Sensor.

With these changes made, the 47PFL6008 suffers next to no backlight clouding while also, rather handily, serving up a much more satisfyingly deep black level response than we’ve seen from any other passive 3D TV this year.

The hugely improved black level handling joins forces, moreover, with many other image strengths. Philips’ now-traditional sharpness with HD sources is strongly to the fore, aided and abetted by plenty of brightness and a bold but still subtle colour palette. So long as you keep the sharpness boosting feature off, moreover, the extreme detailing and texturing in HD pictures looks impeccably natural, with no extra grain or fizzing added.

It doesn’t do the Philips 47PFL6008’s sharpness any harm, either, that it handles motion very nicely for a mid-range TV. In fact, motion clarity is pretty remarkable if you use Philips’ Perfect Natural Motion system (though we’d only suggest that you try this on its lowest power setting). Even if you opt not to use it (the fluidity it introduces to pictures may be a bit too aggressive for some tastes), though, motion resolution remains pretty decent.

The Philips 47PFL6008 upscales standard definition quite well too, adding a palpable sense of sharpness and detail while also keeping a lid on video noise (though Philips’ flagship 8008 models are understandably better in this respect).