The Philips 46PFL8008S is a 46-inch TV that sits at the top of its 2013 range. Well, apart from the brand’s ‘extreme’ DesignLine model and any 4K screens it might launch towards the end of the year, that is… Its premium status means it carries active 3D playback, Philips’ top level of image processing, and a Smart TV system that extends to a Skype camera built into a little bulge in the TV’s bottom edge. 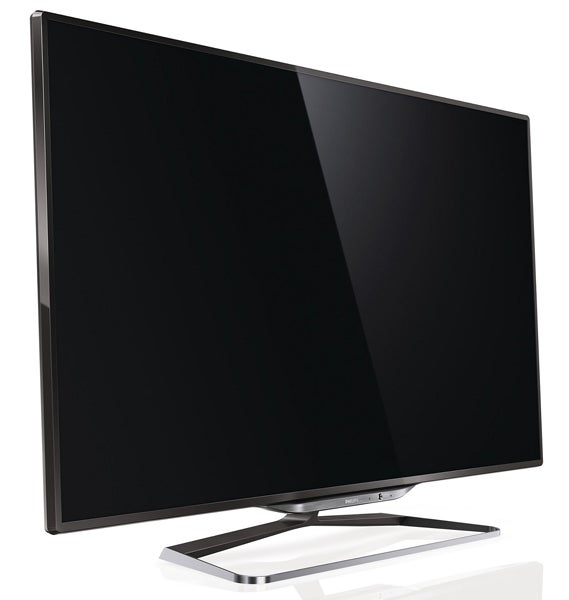 This camera isn’t the only striking thing about the 46PFL8008S’s design, though. Its frame is also exceptionally slim even by today’s ‘barely there’ standards, and its dark grey stainless steel bezel screams premium build quality. The set’s rear is impressively slim, too, making it an excellent wall-hanging option.

This being a Philips TV, the 46PFL8008S also stands out from the crowd courtesy of Ambilight, which in this set’s configuration throws pools of coloured light from the TV’s top edge as well as its left and right sides. Including the top edge in the Ambilight effect makes the system much more effective and immersive in our opinion, especially if you set it to track and match the colour content of the image your watching.

Turning our attention to the rear, we’re pleased to note the appearance of a couple of unusually potent-looking speakers and a strong selection of connections. Four HDMIs dominate, while multimedia features are supported by three USBs, a D-Sub PC connection, a LAN port and built-in Wi-Fi. The Wi-Fi abilities extend to Miracast, the new open source wireless mirroring standard that’s an alternative to Apple AirPlay.

Although Philips has sold both passive and active 3D sets in its TV ranges for a couple of generations now, it continues to take the view that the active 3D system is the premium solution. So it’s this one that’s found inside the Philips 46PFL8008S, supported by two free pairs of active shutter glasses.

As well as using a different 3D system to the recently tested Philips 55PFL7008, the Philips 46PFL8008 uses higher level picture processing to that provided on its cheaper sibling, switching to Philips’ top-line Perfect Pixel HD engine. This is significant, as we’ve consistently found this much more powerful system able to deliver much cleaner and satisfying pictures than Pixel Precise HD.

Also potentially critical is the use in the 46PFL8008 of a native 200Hz panel, which joins forces with image processing and a scanning backlight system to deliver a claimed (using Philips’ own terminology) 1400Hz Perfect Motion Rate. This is twice as high as the PMR of the PFL7008 series, and should deliver a significant performance boost, especially where motion reproduction is concerned.

All this talk of picture processing will likely be putting some of our reader’s teeth on edge. After all, video processing has a nasty habit of disturbing the purity of incoming images that some AV enthusiasts crave so much. 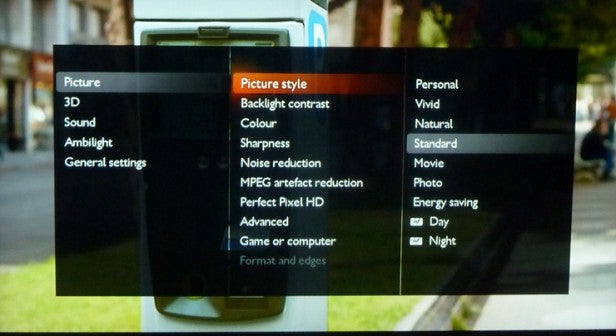 However, to us it seems undeniable that some elements of the Perfect Pixel HD processing system can make pictures look palpably better. Admittedly not all elements are helpful; the noise reduction and edge enhancement features in particular cause more problems than they solve. You should also generally only use other elements of the processing on their low ‘power’ settings, and we’d also recommend using a few features – especially the Perfect Natural Motion HD circuit – only with some sources rather than all the time.

While this makes the Philips 46PFL8008S more labour intensive than many TVs, though, it entirely justifies Philips’ decision to give you control over so many picture elements.

It’s worth adding here, too, that the huge array of picture adjustments at your disposal has enabled the Philips 46PFL8008S to receive the backing of the Imaging Science Foundation, leading to the appearance of an ISF-approved setting for Ambilight and two ISF picture preset slots where a professional calibrator could store separate day and night image settings.

Used as the main TV for the review period
Tested for more than a week
Tested using industry calibrated tools, discs and with real world use
Tested with broadcast content (HD/SD), video streams and demo discs
Next
Features and Performance Review