The 43-inch 43PUS6501 is Philips’ latest attempt to dominate the budget 4K TV market. Available from Currys for just £499, it offers a two-sided version of Philips’ unique Ambilight technology, as well as HDR playback and the Android TV smart platform.

Ultimately, though, a poor choice of core LCD panel stops it from being a truly irresistible bargain – but compelling rivals are hard to find.

Philips tries to cling to the glamour of its more expensive 2016 TVs with the 43PUS6501, but it doesn’t really succeed. 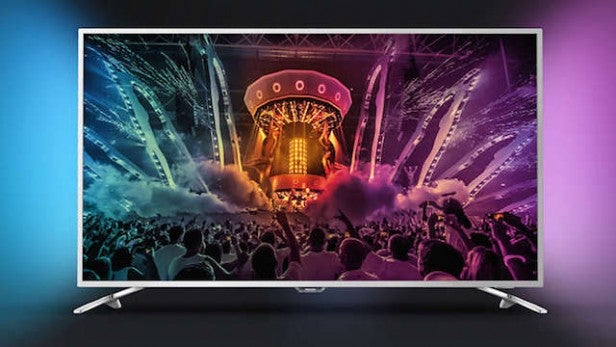 The light-grey colouring of its screen frame highlights its plasticky finish versus the metallic sheen used so effectively further up the Philips range. Its rear is chunky (77mm), and while its arched desktop feet enjoy a gleaming metallic finish, this again emphasises the relatively cheap look of the main TV.

The 43PUS6501’s best design feature is a two-sided version of Philips’ unique Ambilight technology. This casts coloured light from the TV’s rear left and right sides to match the colour content of the pictures you’re watching.

The 43PUS6501 ships with one of Philips’ two-sided remote controls. On one side you get the usual array of buttons, and on the other you get a full QWERTY keyboard to make it easier to type text into search fields and the like.

The 43PUS6501’s relatively low-contrast IPS panel and surprisingly hefty video-processing engine for such a cheap TV makes it complicated to get the best out of the TV.

My main tips would be to set the screen contrast to Standard, turn off all noise reduction, set the dynamic contrast system to low or medium, and set the Perfect Natural Motion setting to minimum or off. 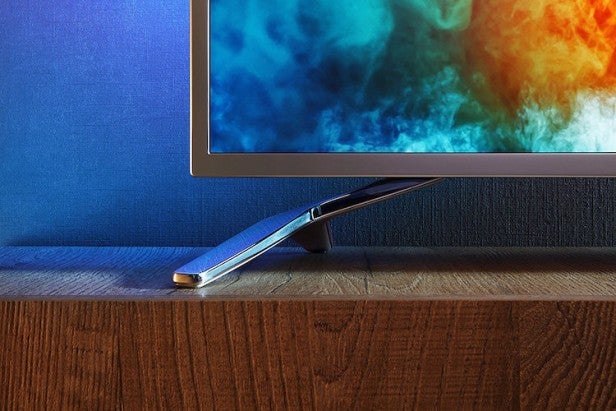 Choose a relatively gentle mode for Ambilight too, since it can go from being immersive to distracting if run too hard.

Finally, use the Enhanced colour mode for HDR but not standard dynamic range viewing, and leave the Ultra Resolution feature on – even with native 4K content – except for when you’re watching something that’s particularly grainy.

The 43PUS6501 scores big on shelf appeal with its “holy trinity” of a native 4K resolution, HDR support and a remarkably cheap price – even though its 43-inch screen won’t be as impactful as larger screens when selling the benefits of 4K.

Its meagre listed brightness of 400 nits doesn’t inspire much faith in its HDR abilities, and it achieves only around 70% of the DCI-P3 colour spectrum versus the 90% recommended for truly convincing wide colour spectrum performance.

For me, however, the single most troubling thing about the 43PUS6501 is its use of an IPS panel. These are notorious for struggling with contrast – a problem that’s become particularly difficult to ignore in these high-brightness days of HDR.

The 43PUS6501’s smart features come courtesy of a combination of Philips’ own in-house system and Android TV. Android TV continues to feel cumbersome and dictatorial, however, and the strain of handling it may explain why the 43PUS6501’s menus run rather sluggishly.

Available apps include the 4K-capable versions of Amazon and Netflix, but currently neither of these apps supports HDR. Also, the only one of the “big four” UK catch-up TV apps currently supported is the BBC iPlayer.

Connectivity is respectable by budget TV standards, thanks to the inclusion of four HDMIs, three USBs plus both Wi-Fi and hard-wired network options. Only two of the HDMIs support HDR, though.

The first thing I had to check on the 43PUS6501 given its IPS panel was its contrast. And the news is… mixed. 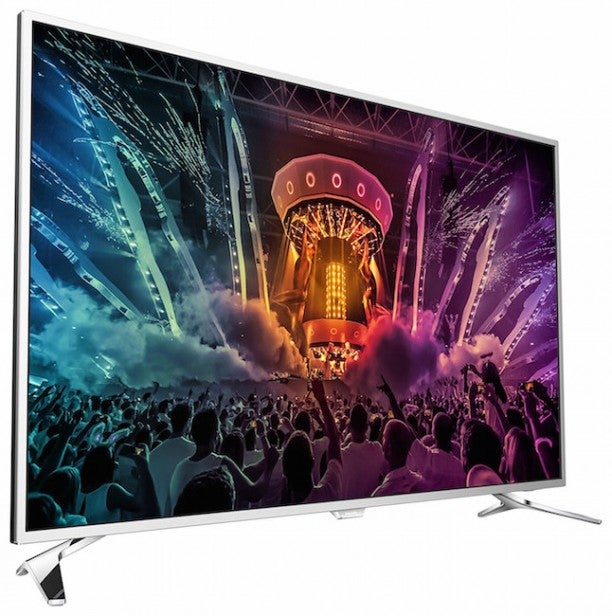 On the one hand, the 43PUS6501 delivers dark scenes with more authority and deeper blacks than its previously tested 55PUS6401 sibling. This proves once more the advantages of using direct LED lighting.

However, the 43PUS6501’s black levels are still distinctly average by the standards of the TV world at large. There’s also extensive backlight clouding and edge bleed during dark scenes – especially if you’re watching an HDR source with black bars above and below it.

The Ambilight system reduces the impact of the light clouding, but doesn’t get close to hiding it completely.

While its backlight issues make the 43PUS6501 below average with dark HDR scenes, it actually outperforms its price with bright ones. Despite having only 400 nits to play with, it produces at least a sense of HDR’s extra brightness range and colour intensity. Bright peaks look brighter, dark areas look darker, and colours look richer.

Sometimes this extra richness results in some rather orangey-looking skin tones, while the brightest parts of the picture can lose detail. For the most part, though, the 43PUS6501 does a surprisingly good job of hiding its inherent colour range limitations.

I was also pleasantly surprised by the way it manages to avoid the tendency to over-exaggerate blacks in HDR mode, a common issue with most low-brightness HDR TVs. 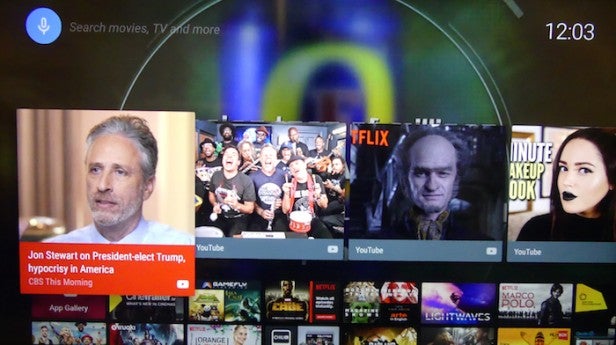 If you want the best HDR images from the 43PUS6501 then don’t partner it with a Panasonic Ultra HD Blu-ray player. Since these usually brilliant decks output 12-bit video rather than 10-bit, they can cause the TV to suffer extreme colour banding in skies and richly coloured backdrops. This banding disappears with the Samsung K8500 or Xbox One S UHD BD decks, however.

The 43PUS6501 outguns almost all the similarly priced opposition with its sharpness (provided you have the Ultra Resolution feature on). Native 4K and upscaled HD sources look phenomenally detailed, despite the screen’s relatively small size.

The 43PUS6501’s backlight issues mean it isn’t surprising to find it better suited to playing standard dynamic range (SDR) than HDR. With SDR you get all the sharpness of HDR, but with a more consistently natural (if not so rich) colour palette and less-compromised black levels.

However, even in SDR mode, backlight clouding in the corners proved routinely distracting.

Partnering the 43PUS6501’s hit-and-miss pictures is similarly hit-and-miss audio. The set is capable of reaching quite loud volumes for such a small screen without distortion or cabinet rattle.

However, at high volumes with dense soundtrack moments the sound becomes harsh, due to a lack of bass and a congested upper mid-range. The speakers don’t cast a particularly wide sound stage, either. 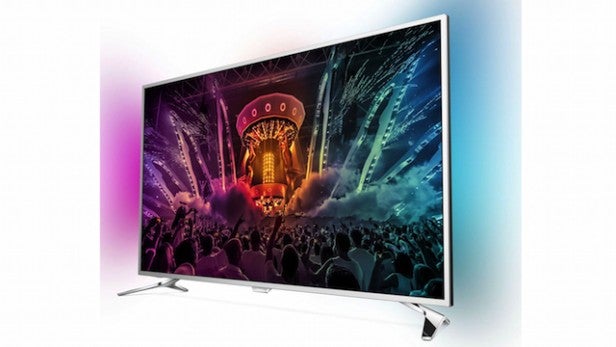 For anyone considering buying the 43PUS6501 for gaming, I measured its input lag at around 30ms on average. This respectably low figure applies in both HDR and SDR mode, which is good. However, the amount of lag can vary significantly around that 30ms average: between lows of 10ms and highs of 51ms.

The 43PUS6501’s use of an IPS panel leads to some distracting backlight flaws during very dark scenes, and it doesn’t have the colour or light range to really do HDR justice.

That said, if £500 is as far as your budget can stretch then there isn’t really anything else around for the same money that performs as well and offers so many features.

The 43PUS6501 clings to just enough of Philips’ traditional processing, colour and clarity qualities to stand out from the budget crowd. To be clear, though – if it was priced even £50 higher, you’d be looking at an overall mark of 3 stars only.