To be honest, I’m approaching the Philips 42PFL7404 today with a degree of trepidation. For while every model I’ve seen from Philips’ all-singing, all-dancing 9000 TV series has proven suitably impressive, I wasn’t entirely blown away by Philips’ attempt to step downmarket a little, in the shape of the 42PFL8404.


It wasn’t by any means a bad TV; it just didn’t seem quite good enough to justify its price versus some of the cheaper things currently being offered by Samsung and Sony.


The 42PFL7404, as its model number suggests, takes things down yet another step. So I can’t help but wonder if the concerns raised by the 42PFL8404 will also apply to the 42PFL7404, with knobs on…


Happily, the early signs are good that this actually won’t be the case, for Philips has stepped down its pricing for the 42PFL7404 really quite dramatically. The 8404 model clocked in at the best part of £1,100, but I’ve found the 42PFL7404 going online for as little as £770 – a saving of more than £300 that puts the set much more in the ball park of those Sony and Samsung rivals that troubled me so much when considering the 42PFL8404. 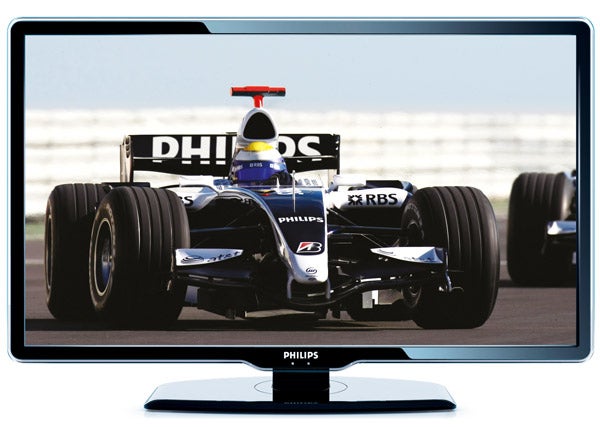 At which point, of course, we need to get to the bottom of what makes the 42PFL7404 different to its more expensive sibling. And here again, the news is arguably pretty good, for the only immediately obvious feature changes are that the 42PFL7404 doesn’t have the Ethernet port or Ambilight functionality sported by the 42PFL8404.


Of course, there will be people out there for whom the 42PFL7404’s missing features will appear serious. Multimedia fiends will doubtless decry the missing Ethernet port, for it denies you access both to files on a DLNA PC, and Philips’ online service – complete with full Internet access.


Similarly, people who see TVs as enhancements to their decor will undoubtedly miss the Ambilight system, with its ability to cast pools of coloured light from the sides of the screen. For me, though, the only thing that really matters is that nothing has been taken away from the 42PFL7404 that should affect its core picture performance.


Things might not be quite so clear cut when it comes to the 42PFL7404’s audio, though. For in another spec change, it uses ‘hidden’ speakers rather than the visible ‘bar’ noted along the bottom edge of the 42PFL8404. But we’ll reserve judgement on how much this matters until we’ve actually heard the set in action.


Despite the talk of hidden versus visible speakers, the 42PFL7404’s design is actually pretty similar – and similarly pretty! – to its costlier sibling. The main bezel is finished in the same gloss black and is equally slim (under an inch across). Plus it benefits from a similar eye-catching transparent outer frame. There just isn’t that strip of silvery speakers hanging under the bottom edge.


Connections-wise, the 42PFL7404 appears the same as that of the 42PFL8404, bar the missing Ethernet port. Which means you get highlights of four HDMIs, a USB port and a VGA jack – all very respectable for a sub-£800 42in TV. Closer inspection of these connections reveals that the 42PFL7404 plays back the same multimedia file formats as the 42PFL8404 too (MP3s, LPCM, JPEGs, MPEG1/2, H.264/MPEG-4 AVC, WMA, MPEG-Programme-stream PAL and WMV9/VC1).

As noted earlier, the 42PFL7404’s pictures enjoy the same key specifications as those of the 42PFL8404. The screen is Full HD, the claimed contrast ratio is the same 80,000:1 figure, and image processing comes courtesy of the same Pixel Precise HD engine.


Having gone into some detail about the difference between Philips’ top-line Perfect Pixel HD system and Pixel Precise HD in the 42PFL8404 review, I don’t intend to go over the same ground again here. Suffice it to say that, simply speaking, Pixel Precise HD is roughly half as powerful as Philips’ flagship processor.


The 42PFL7404 also shares the same decent if slightly sluggish onscreen menu system as the 42PFL8404, complete with the sort of extensive picture tweak lists – taking you deep into the workings of the Pixel Precise HD engine – that are now becoming standard with Philips TVs. 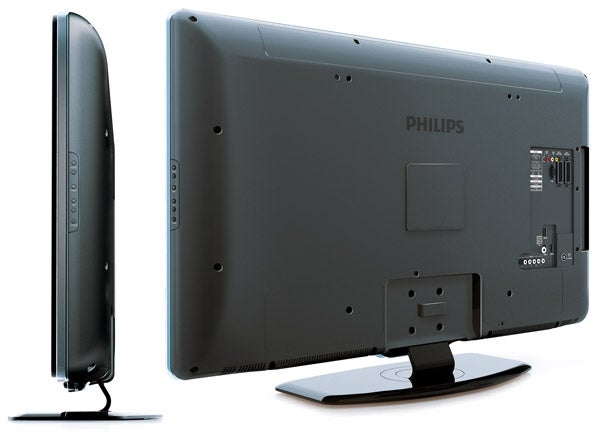 As regular readers will know, with the 42PFL7404, as with all of Philips’ processing-heavy TVs, you’ll need to make regular trips to some of the set’s picture features – especially HD Natural Motion, noise reduction and Advanced Sharpness if you want to continually get the best performance out of the set. But the results of this extra effort really are worth your while on the 42PFL7404.


And since we’re freed of the price concerns I had with the 42PFL8404, the 42PFL7404’s overall performance is raised from feeling pretty good to feeling quite excellent.


To be clear on this, I’m not saying the 42PFL7404’s pictures are actually better than those of the 42PFL8404. Clearly this can’t be the case, given that their picture processors and screens are identical. What I most definitely am saying, though, is that the 42PFL7404’s pictures compare much more favourably with the competition around at the much lower sub-£800 price point and so this raises the set’s value significantly. 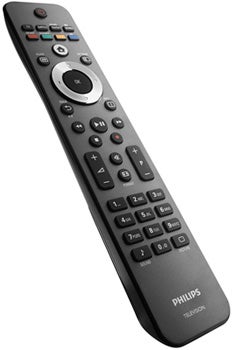 Getting into more detail on why the 42PFL7404’s pictures are rather excellent for a sub-£800 TV, let’s start with how stunningly sharp and detailed they are. This is obviously most gloriously apparent when watching HD. The still (for me) unmatched levels of detail evident in Gears of War 2’s Xbox graphics are done full justice to by the 42PFL7404, and then some. Similarly, the terrific levels of clarity and sharpness evident in the Blu-ray of Baz Luhrmann’s faintly silly ”Australia” are reproduced in all their glory.


As I noted in my review of the 42PFL8404, the 42PFL7404’s Pixel Precise HD system doesn’t make standard definition pictures look quite as sharp as they do on Philips’ Perfect Pixel HD TVs. But they certainly hold up very well indeed when considered against the £800 competition.


It’s a similar story with the set’s motion handling. For while the 42PFL7404’s motion handling doesn’t remove blur as completely or with as much freedom from side effects as Philips’ Perfect Pixel HD engine, its results in terms of fluidity and motion sharpness still look pretty tasty versus the immediate competition.

The 42PFL7404’s colours also make an impact in comparison with much of the direct competition. They are explosive in intensity, unusually expressive, and usually quite accurately toned.


Sure, there’s a slight grey cloudiness to proceedings that you don’t get with Philips’ 9000 series or, more tellingly, Samsung’s cheaper Samsung B650/B550 LCD models – or any number of Panasonic’s plasma TVs, come to that. The dynamic contrast system occasionally causes noticeable brightness jumps, too. But generally things are perfectly good enough to let you watch even darkness-dominated films without feeling distracted. 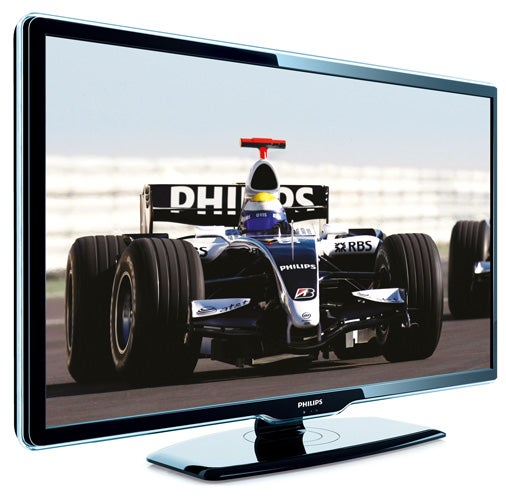 There are a few issues, though, that even the 42PFL7404’s significantly cheaper price can’t quite excuse. The set’s viewing angle is alarmingly limited, for instance, presenting a potentially big problem to living rooms with seating positions down the sides of the TV rather than directly in front of it.


Also, the Pixel Precise system can cause a little grittiness and edge over-emphasis with some standard def sources, especially if they’re of a low native quality. There’s sometimes shimmering, too, around large moving objects if you leave the HD Natural Motion system on with high-octane sources the system can’t keep up with.


The 42PFL7404 isn’t quite as accomplished with its sound as it is with its pictures. As with most ‘invisible’ speaker systems, there’s a distinct lack of bass in the mix, which can leave action scenes sounding rather shrieky and thin. With this in mind, it’s a shame Philips couldn’t run to the rear-mounted subwoofers found on some of last year’s sets.


But at least voices generally remain clear and believable, even under duress, and there’s a surprising amount of width and detailing to the soundstage produced during action scenes.


While the 42PFL8404’s higher price held back it’s value score and indeed it’s overall one, the 42PFL7404’s aggressive pricing turns things neatly on their head. In fact, the shift engendered by the cheaper price is here so dramatic that it’s persuaded me to give the 42PFL7404 a TrustedReviews Recommended award even though both sets use the same picture engine.