Today we have to start with a question: exactly how green are you? Does the extent of your conscience only run to recycling a few cans and bits of cardboard, or are you actually willing to pay more money for ‘green’ AV products?


Quite possibly you haven’t thought about this before given how few genuinely green products have so far appeared. But it’s a question you definitely need to ask yourself for this review, as the aptly named Philips 42PFL6805H ‘Econova’ is far and away the greenest TV we’ve ever seen. 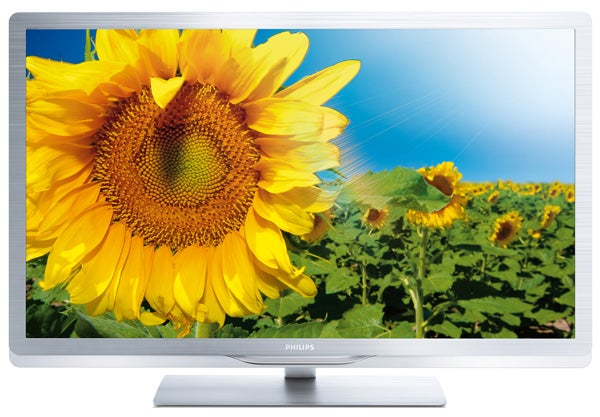 However, while we obviously try to be as green as the next man, we also love our AV quality. So our job today is to find out if going green for your next TV requires you to take massive hits on your AV features and quality – and whether its eco credentials are really extensive enough to justify a sum of £1,200 for a 42in LCD TV.


First impressions of the TV are very promising. For remarkably it completely rewrites the traditional eco product rule book by looking positively extravagant in its glistening brushed aluminium bezel and ultra-slim chassis. Even though the majority of the metallic chassis is made from recycled aluminium using less than 10 per cent of the energy you’d need to make fresh aluminium.


What’s more, one of the reasons the rear is so slim is that the Econova doesn’t actually have a back. Not in the usual way, anyway. Instead, the rear of the TV is the rear of the screen mounting plate; there’s no extra ‘bolt on’ bit, with all the wasteful material use such a cover would entail. 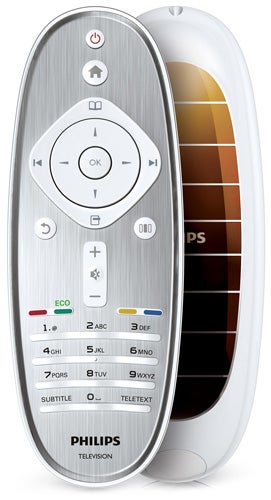 Philips has also cleverly saved on materials with the TV’s stand. For as well as being made again from mostly recycled aluminium, this stand can also rotate backwards to form the TV’s wall mount, so there’s no need to manufacture a separate wall mount. Ingenious.


Even more ingenious, though, is the TV’s remote control. For this lovely looking little chap actually runs on solar power, with the necessary solar panel sitting on the remote’s rear. Obviously, this might be problematic if you intend to install your Econova into a perpetually darkened room. But we didn’t have any problems during our week-long test period, and there’s a USB cable provided should you need to top the power up when light levels let it down.


Yet another headline eco feature of the Econova is its running power. For thanks to a specially designed edge LED lighting system, the set can run on just 40W. This is obviously a best-case scenario, with the screen’s brightness output at its lowest. But even so, it’s still more than twice as economical as the best efforts of the previous greenest TVs we’ve come across, Sony’s WE5 series.


Elsewhere, you can turn the TV completely off via a zero-power switch; you can ‘mute’ the screen if you only need to hear the audio; there are all sorts of light meter and auto-off settings; and finally you can call up a simple onscreen display of how much power you’re using with your current settings at any given moment.

Perhaps the most ultimately remarkable thing about the Econova’s eco credentials, though, is just how all-encompassing they are. For aside from the mostly obvious things we’ve already mentioned, Philips has also used less cabling inside the TV than usual; the circuit boards, cables and the power supply are all totally halogen-free; and there’s remarkably little plastic in its body compared with your average TV. Even the set’s packaging is green to the core, using cardboard pads rather than the usual polystyrene ones, and paper bags instead of plastic ones.


The Econova’s eco ambitions mean it lacks Philips’ usual Ambilight feature, so you don’t get the usual eye-catching and immersive coloured lights pouring from the TV’s sides. But there are also a couple of missing features less easily explained by eco concerns, namely a Freeview HD tuner and any online or DLNA PC connectivity. 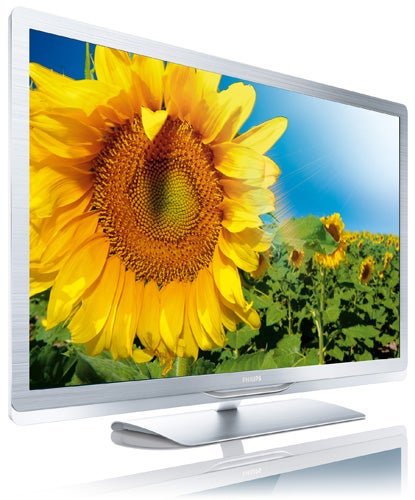 Philips hasn’t actually included Freeview HD tuners in any of its current TV range, mind you, and has knocked a couple of hundred pounds or so off its original retail prices to compensate. But the missing DLNA and online features are more of a surprise given Philips’ usual prowess in both these areas.


Despite not having an Ethernet port, though, the Econova can’t be considered light on connections. For it’s got a component video port alongside a healthy roster of four HDMIs and a USB port, the latter of which can play video as well as photo and music files.


The set also boasts some fairly heavy-duty picture processing, combining 100Hz with Philips’ Pixel Precise HD engine. This isn’t actually Philips’ most powerful video processor. That honour goes to the Perfect Pixel HD engine sported by the brand’s flagship 9000 Series of TVs. But Pixel Precise HD is still more powerful than the picture engines of most other brands, and sets about improving most of the key elements of a video picture – but especially standard definition upscaling.

As a result of this, standard definition pictures often look sharper than they do on any other TV we can think of beyond Philips’ own 9000 Series. Admittedly, there’s a price to pay for the extra sharpness in the form of slightly elevated picture noise levels. But provided you’re careful to avoid pushing the contrast too high and don’t use the Advanced Sharpness feature, the pluses of the set’s processing with standard definition far outweigh the negatives in our opinion.


That said, the Econova predictably shifts up multiple gears with HD material. The noise vanishes – unless it’s there in the source – and you’re left to enjoy an HD picture of much more clarity, detail and intensity than you would probably have thought possible from a TV driven by green concerns.


The set’s black level response is decent enough, though there’s certainly more greyness around during dark scenes than you get with Philips’ higher-end sets, especially the direct LED 9000 Series.


It’s a similar story with the Econova’s motion handling too, in that while it’s actually very good – especially where judder removal is concerned – by general TV world standards, it’s not as good as the best Philips models. Particularly when it comes to the amount of processing side effect noise that can occur if you set the HD Natural Motion circuitry higher than its lowest power level.

Colours, meanwhile, are decently dynamic by the standards of typical 42in TVs without, again, hitting the retina-searing extravagance of Philips’ higher-end sets. Also, while they generally look natural, they lack the extreme finesse and range of Philips’ performance-focused models.


Now for the confessional bit. The impressive overall picture quality described above wasn’t achieved while using the TV in its most economical running mode. The AV fanatic in us just had to be satisfied first, so we initially just calibrated the TV to deliver what we felt was the optimum picture performance.


However, this isn’t to suggest that the Econova’s pictures collapse when you do emphasise its eco settings. In fact, the more reined in, less aggressive look to its eco-driven pictures might actually suit some tastes better than the more dynamic look we settled on. Especially as the reduced brightness output and colour saturations are joined by a noticeably less noisy overall picture feel. 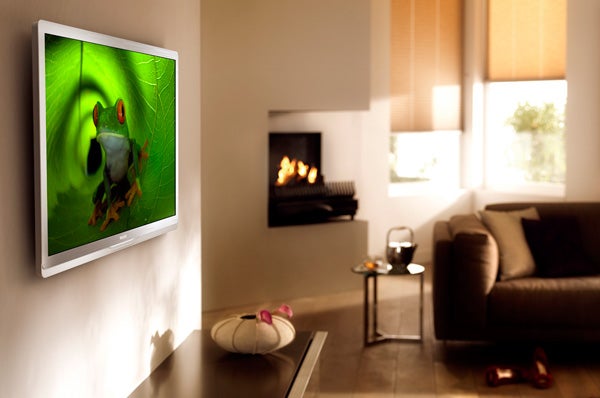 The only thing to warn would-be green viewers about is that the brightness reduction is sufficiently extreme when the TV’s at its most economical that we could probably only recommend you to use those settings in a pretty dark room, otherwise the picture could look flat and uninvolving.


But then what, really, did you expect? It was never going to be the case with the Econova that the only thing you’d have to pay to follow your ecological obsessions was a price ticket premium. Clearly some aspects of the TV’s performance would have to take a hit too.


Let’s wrap up our generally very positive feelings about the Econova by stressing that Philips hasn’t apparently felt the need to compromise the set’s audio performance in its energy-saving quest. In fact, while the Econova’s sound is no match for the exceptional power and dynamics of Philips’ quality-oriented premium TVs, it’s got more than enough presence, clarity, range and raw power to compete with most ‘normal’ 42in flat TVs.


With the Econova, Philips really has made extraordinary efforts to prove that you don’t have to wear recycled paper underpants to show your love for your home planet. It’s hard to think of any aspect of TV design that Philips hasn’t lavished its green-minded attentions on, yet the set also looks gorgeous and can perform very well too.


Yes, performance levels take a hit when you run the screen using its most environmentally friendly settings. But even then pictures are nothing if not enjoyable, at least in a relatively dark room. And let’s not forget that there’s so much other stuff about the Econova beyond ‘mere’ picture quality matters that mark it out as a truly green TV.


The only potential catch is its relatively high (by 42in standards) £1,200 price. If we’re brutally honest, we’d probably still spend that sort of money on getting as much raw performance quality and/or screen size as we could, rather than paying for the Econova’s eco sensibilities.


But that doesn’t make the set any less worthy, or mean that it won’t still find an audience among well-heeled heroes with stronger eco convictions than we can currently muster.