One thing the Philips 42PFL5008T definitely is not is the Dutch brand’s eagerly-awaited, EISA-winning, IFA-wowing 4K/UHD TV. In fact, the 42-inch 42PFL5008T sits at pretty much the opposite end of the Philips 2013 TV spectrum, being available for a reasonably aggressive £700. Even so, it still boasts 3D and Smart TV features, so it’s certainly not been stripped down to brass tacks in the bid to make it affordable.

Philips has developed a handy knack in recent times of making even its relatively cheap TVs look cute. And this trend continues with the 42PFL5008T, which combines a slender, high-gloss black bezel with a sleek metallic trim on the bottom edge angled to catch the light and a fetching, well-built open-framed stand for the TV to sit on. 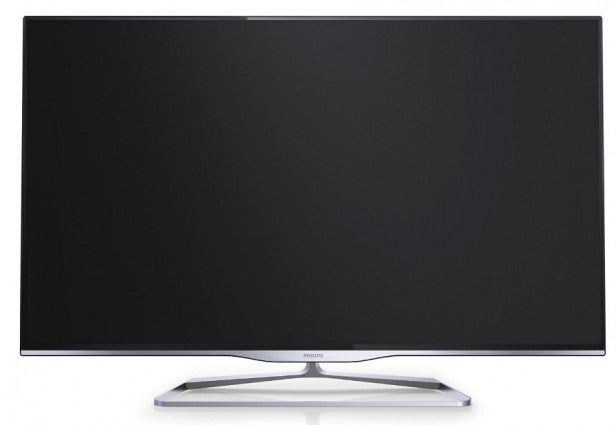 This being a Philips TV, there’s also Ambilight to consider. This finds LED lights ranged down the set’s left and right rear sides pumping out coloured light that can be set to match surprisingly accurately the colour content of the image being shown.

As well as enabling the TV to create a truly unique physical presence, Ambilight can also make viewing in a dark room less fatiguing and your viewing experience more immersive.

There are a couple of potential issues with the 42PFL5008T’s design if you’re thinking of wall hanging it, though. For while it certainly CAN be wall mounted, you need to be aware that a) the set’s rear sports a woofer speaker that we won’t react too well to being pressed against a wall, and b) the majority of the TV’s connections stick straight out of the TV’s rear, rather than being positioned for side access.

These connections include three HDMIs, two USB ports for playback of video, music and JPEG photo multimedia files, and the increasingly inevitable LAN and built-in Wi-Fi network connections.
The HDMIs are built to the v1.4 spec, reflecting the fact that they’re designed to receive 3D signals. The 3D system employed is a passive one, with two pairs of passive 3D glasses included free. 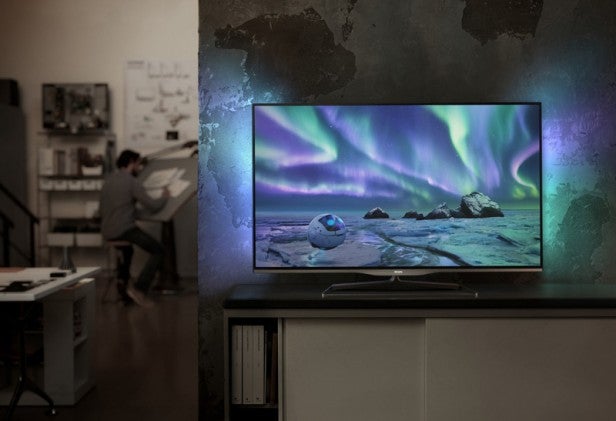 The Philips Smart TV service doesn’t go a bundle on other, non-video apps either, with just a handful of social media, informational and gaming apps versus the dozens now sported by some rival online TV platforms.

The system also runs sluggishly, and on our test sample the picture-in-picture box that lets you keep watching the TV picture when you hit the remote’s Smart TV button didn’t resize the picture, so all you could see in the PIP window was a small corner of the image. Very odd.

In the plus column, the Smart TV platform is pretty easy to use and built on bold graphics, and the Twitter app is more useful than most on-TV Twitter apps in that it automatically tracks down the hashtag Twitter feed associated with whatever you’re watching. Though the fact remains that social media tools still seem much better left to external smart devices.

As usual with a Philips TV, the 42PFL5008T needs more care with its set up than most TVs. This is chiefly because Philips tends to be heavier on the video processing than most if not all rival brands, meaning you have to subdue some of the processing elements if you don’t want the picture to start looking unnatural. 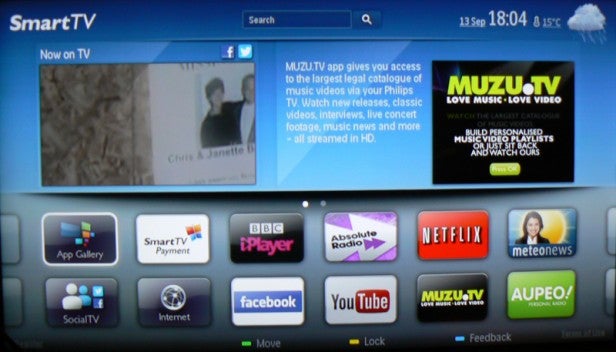 In particular, when watching Blu-ray or any HD source, come to that, we’d recommend that you turn the set’s noise reduction systems off completely to avoid softness; turn off the Advanced Sharpness feature in the Pixel Plus HD menu as this can lead to some pretty unpleasantly over-stressed object edges; select Standard for the Dynamic Backlight feature (as ‘Off’ causes black levels to take a really painful hit while the other two options cause the image’s brightness to leap around too distractingly); and set the backlight contrast to between 75 and 80.

If you’re a real purist you may want to opt for the Movie preset on Philips’ long list of preset options, since this essentially turns off the majority of Philips’ processing systems. But personally we didn’t feel this mode delivered by any means the 42PFL5008T’s maximum image potential, especially where contrast is concerned.

For standard def viewing you can experiment with the lowest settings of the noise reduction modes, but other than that our standard def set-up advice remains broadly the same as for HD.

We have to say we found ourselves revisiting the 42PFL5008T’s set-up menus more regularly than we would those of most TVs. But at least the results of your efforts are mostly worthwhile.