What do you call a fully loaded TV that’s not fully loaded? The Philips 40PFL9705H. For while on the one hand this TV has arguably the most extensive suite of features ever seen on a TV, it also lacks one of the most basic: a Freeview HD tuner.


It’s aggravating to have to talk about this yet again in a Philips TV review, but with such tuners now de rigueur in every other mid- to high-end TV – not to mention a few budget ones – the absence of one in the 40PFL9705H really does look even more unfortunate now than it did before.


The argument could be made that anyone with enough AV ambition to be thinking of forking out £1,400 for a 40in TV will likely have or be able to afford to get a Sky HD subscription. But if even one potential buyer would have liked to use the Freeview HD tuner, then not having one has to count as a bad mistake.


Let’s move swiftly on, then, to features the 40PFL9705H does have, kicking off with its 3D readiness. The necessary external 3D transmitter is now included in the price of the TV, along with two pairs of Philips’ active shutter 3D glasses, making the £1,400 price tag suddenly look much more palatable. 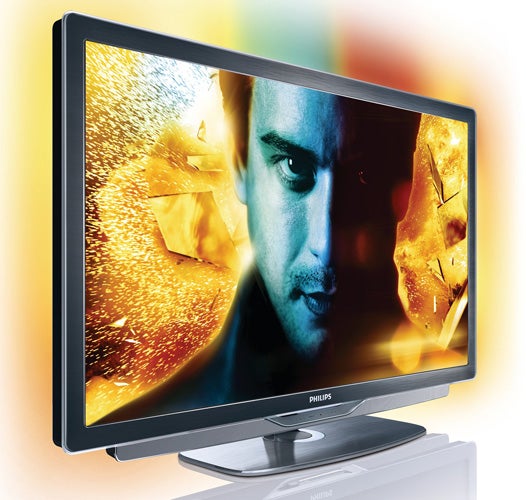 Another dominant 40PFL9705H feature is its video processing. For it boasts the latest, most comprehensive iteration of Philips’ Perfect Pixel HD system, which applies huge amounts of processing power to improving every picture facet, from contrast through sharpness to noise reduction, motion and colour.


What’s more, Philips has placed control of pretty much every facet of this processing engine into your hands, so people worried about images looking unnatural can tweak or deactivate the power levels of individual processing elements to their heart’s content.


Clearly this makes the 40PFL9705H an unusually complicated TV. Especially as we’d recommend that you regularly revisit some of the processing options quite regularly to suit different sources. For instance, while you might well want to set the HD Natural Motion facility on for watching relatively static sources, you most likely won’t appreciate its uniquely powerful judder-removal capabilities when there’s lots of motion going on, as its processing can generate distracting side effects – especially if you set HD Natural Motion to anything higher than its lowest power level.


The 40PFL9705H adds 400Hz (actually 200Hz plus a scanning backlight) to its processing features too, and features the most sophisticated version yet of Philips’ gimmicky-sounding but actually rather impressive Ambilight technology. This can produce coloured light from the TV’s edges that matches, with uncanny accuracy, the colour content of the image being shown.


Probably the 40PFL9705H’s biggest selling point to the AV cognoscenti, though, is its use of direct LED lighting with local dimming. We’ve consistently found this approach, which places an array of individually controllable LED light clusters directly behind the screen, to produce the best LCD picture quality.

This is chiefly because the ability to control the screen’s illumination locally allows TVs like the 40PFL9705H to have deep black levels within the same single frame as really bright whites – a combination you otherwise have to turn to plasma for.


There are potential downsides to the direct LED/local dimming approach in the form of haloes around really bright objects, and lost shadow detail in the dark areas. So we’ll be looking out for these issues when we start testing its picture performance. 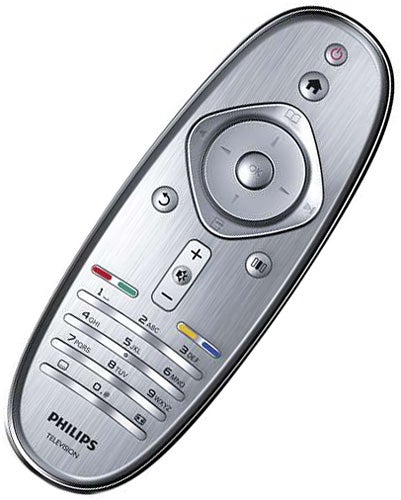 The 40PFL9705H’s multimedia capabilities, meanwhile, are terrific. They include built-in Wi-Fi for accessing either multimedia files on a DLNA PC, or Philips’ NetTV online platform. The quantity of file formats supported via DLNA is huge, covering most standard – and a few not so standard – video, photo and music types, while NetTV is beautifully presented and very ‘app’-focused in its approach. It also offers open Internet access via an Opera browser, complete with a surprisingly OK text input system via the superb remote control.


NetTV’s content levels aren’t up there with the best online platforms right now though, especially as a bit too much of its video content is only available via subscriptions.

It takes all of a couple of seconds to find the 40PFL9705H’s pictures making the most of all the tricks Philips has thrown at the TV. Starting with a 2D Blu-ray or two, the 40PFL9705H’s pictures are often nothing short of dazzling. Black level response, for instance, is so profound that we had to pinch ourselves to be sure we were still watching a real LCD TV. In fact, there are times when the 40PFL9705H seems to achieve black levels deeper even than Panasonic’s plasmas. Seriously.


Even more non-LCD like is the way you can have pristine, almost scarily intense whites sitting right alongside those exceptionally dark blacks we mentioned. Provided you’re sat pretty much opposite the TV rather than down its sides, moreover, this combination of bright whites against dark backgrounds is hardly ever accompanied by any significant trace of that haloing phenomenon we were concerned about earlier. 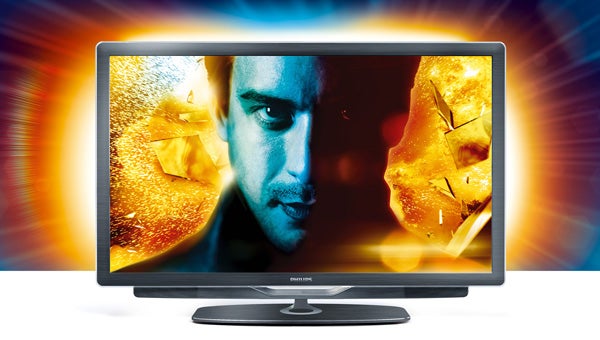 The 40PFL9705H’s approach to colours, meanwhile, is to turn them to 11. Even after calibrating the screen to get the best contrast and brightness balance, the intensity with which the set drives out its colours is a sight to behold. Especially as somehow it’s achieved without reducing blend subtlety.


The sheer dynamism and range of the 40PFL9705H’s tonal palette also does a great job of making colours look natural and believable, at least in relation to each other. And anyway, if you want to tone colours down, then the tools are there to allow you to do so.


The most controversial aspect of the 40PFL9705H is its motion handling. For whether you actually like the effect or not, the fact remains that the HD Natural Motion circuitry is uniquely good at smoothing away judder and sharpening away image lag and blur.

For people who hate it, though – and we must confess that despite what we just said, we only use it on its lowest setting, and not at all with Blu-rays – the good news is that the 40PFL9705H doesn’t suffer badly at all with judder or motion blur even with the Natural Motion circuitry completely deactivated.


One last trick of the Perfect Pixel HD processing that we personally have a lot of time for but some people apparently don’t like is its impact on standard definition pictures. For us, the upscaling component of the system is capable of making standard def pictures look sharper than they do on any other TV. Sure, this aggressive detail enhancement and the screen’s natural tendency to be bright and bold can lead to standard def pictures looking noisy. But taking such simple measures as ensuring the TV’s artificial sharpness booster is turned off and reducing the contrast and brightness can improve the noise issue no end, leaving you with a standard def picture that’s more often than not quite outstanding, especially if the source was of a decent quality in the first place. 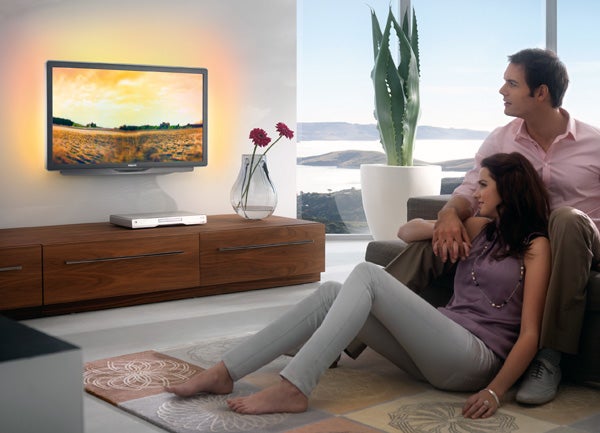 As must have become apparent by now, we weren’t over-stating matters when we said earlier that you really need to regularly revisit the 40PFL9705H’s picture settings to always get the absolute best from them. Other 2D issues to be aware of find the appearance of haloing around bright objects increasing markedly if you’re watching the screen from an angle, and a slight loss of shadow detail in very dark areas. Though really this is less of an issue than we’d expected it to be.


The 40PFL9705H’s 3D pictures aren’t quite as good as its 2D ones. On the upside, the screen’s fearsome colour intensity and extreme brightness and contrast levels help it compensate superbly for the inevitable dimming effect of donning Philips’ respectably comfortable 3D glasses.


On the downside, there’s enough evidence of crosstalk to make the ghosting issue something we couldn’t stop ourselves looking out for after a while, to the point where it becomes potentially quite distracting. To be fair, the crosstalk isn’t nearly as aggressive or common as it is on many other LCD TVs, but it’s certainly more of an issue than it is with the 3D plasma TVs out there. Especially Panasonic’s.


Enabling us to finish on a high, though, is the 40PFL9705H’s audio. Philips has cleverly integrated some dedicated mid-range drivers onto the screen’s rear, which work in tandem with separate dome tweeters to produce a soundstage of such range, accuracy and power that it’s hard to believe it’s coming from such a slender TV.


The 40PFL9705H won’t be for every one. Its relatively high price, lack of a Freeview HD tuner and rather demanding nature see to that. But if you can get past these initial ‘barriers to entry’, we’re confident that you will end up falling hook, line and sinker for the occasionally mind-blowing AV and multimedia skills of what has to be one of the most technically advanced TVs of its generation.