Philips’ latest mid-range TV, the 40in 40PFL7605, doesn’t have a Freeview HD tuner. Sorry to start so abruptly, but we really need to get this bare fact out there right away, just so there can be no confusion about it later, and so that people dead set on having a Freeview HD tuner built into their next telly have the option to stop reading now and move along to something else. 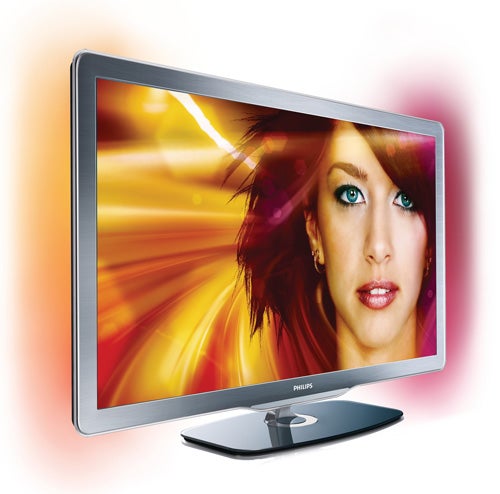 Just before all you Freeview HD lovers out there pop off, though, it’s worth pausing momentarily to consider whether Philips’ unquestionably short-sighted omission of Freeview HD tuners on all of its current and upcoming TVs really ought to be considered an instant deal breaker.


For as we’ll discover, in many ways the 40PFL7605H is a startlingly accomplished TV, considerably better in picture and sound terms than arguably any of its rivals. So dismissing it for the missing tuner might actually be cutting off your nose to spite your face, especially as external Freeview HD tuners aren’t exactly megabucks these days.


Anyway, we’re getting way ahead of ourselves here. So let’s get right back to basics by saying that the 40PFL7605H is a startlingly attractive TV for a mid-range model. Its distinctive grey frame with neatly rounded corners and fashionable outer transparent ‘shroud’ differs pleasingly from any other ‘look’ right now.

The screen is also extremely slender – under 30mm deep for a good portion of its rear – a result of using edge LED lighting. This makes it the first mid-range Philips TV to adopt this trendy tech.


Even better, despite the screen’s slenderness Philips has retained a ‘stereo’ incarnation of its increasingly clever Ambilight technology. It’s worth noting, too, that the Ambilight system features the newly introduced wall colour adaptability, where you can tell the TV what colour the wall behind your TV is so it can ‘remix’ its colours accordingly.


The only problem with the 40PFL7605’s exterior materialises while you’re fixing it to its stand or the wall. For it squeaks and ‘scrunches’ quite alarmingly while being manhandled, raising questions about its underlying build quality. 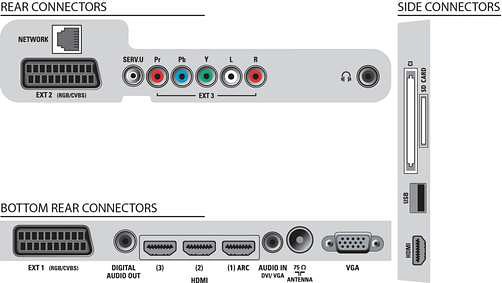 Connectivity is outstanding, however. Given the need to add an external HD tuner, it’s nice to find things leading off with a healthy four HDMIs – one built to v1.4 spec for Audio Return Channel functionality.


The set also sports a USB port that can either take Philips’ optional USB Wi-Fi adaptor (the PTA01), or else play back a wide variety of photo, music and video codecs. These include JPEG, WMA, AAC, H264/MPEG-4 AVC, MPEG-1, MPEG-2, MPEG-4, WMV9/VC1 and the AVI and MKV containers. All of which really highlights the inadequacies of the multimedia ‘support’ reported with the Toshiba 40SL753 a couple of days ago.


Impressively for a mid-range TV, the 40PFL7605H also allows you to play the same sorts of codecs from networked, DLNA PCs via Wi-Fi or Ethernet. And even better, we’re pleased and surprised to find that the TV gives you access to Philips’ Net TV platform.

As we’ve noted before – such as in our recent feature on the best TV Internet platforms – Net TV is currently unique in the mainstream TV world for offering both ring-fenced, streamlined online content and access to the wider Internet via an integrated Opera browser. 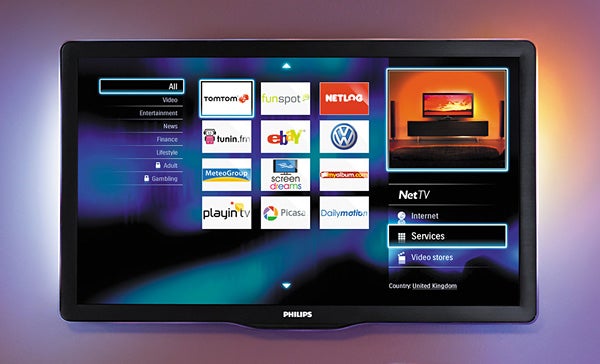 This full Internet browser has its limitations, such as not handling video content and being cumbersome to use when it comes to inputting web addresses. But we still would rather have the option to surf at will than be left with ring-fenced content alone.


One final rather cool trick to mention is that the 40PFL7605 ships with an SD card slot, which you can use to store videos downloaded from Philips’ online services.


As usual with Philips TVs, the 40PFL97605H is pregnant with picture processing. It doesn’t boast Philips’ latest, most powerful Perfect Pixel HD engine, but it does get Pixel Precise HD. This has around half the power of Perfect Pixel HD, but is still powerful versus many rival processing systems. And it works on many of the same picture quality areas as its ‘bigger’ brother, including colour, motion clarity and, especially, sharpness. 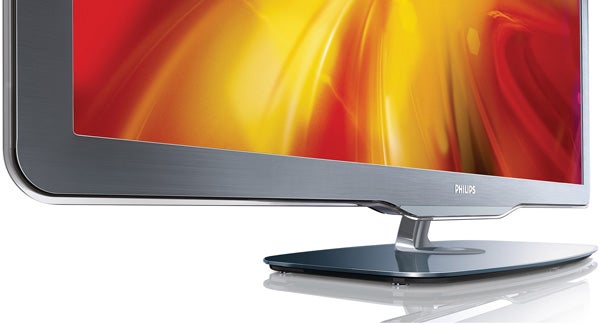 The extensive onscreen menus of the 40PFL7605H allow you to adjust the ‘strength’ of many of the components of the Pixel Precise engine, as well as secondary processors like the 100Hz system and noise reduction routines. The flexibility on offer is admirable in many ways, but it undoubtedly makes the set more demanding on your time than many rivals.


Just as well, then, that when you have the pictures firing on all cylinders, they can look excellent.


The first thing we looked for after our recent troubles with Toshiba’s 40SL753 was signs of obvious backlight inconsistency. But we couldn’t see any tell-tale light pools at all, especially with brightness levels kept down to a sensible (‘50’ max) level.


This allows us to fully appreciate a generally hugely likeable black level response from the edge LED system. Sure, blacks look more milky than they do with the best plasma or direct LED TVs, but they look more natural and deep than those of most CCFL and other edge LED sets. 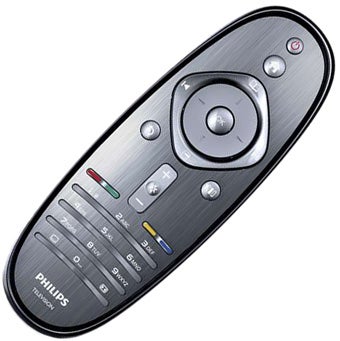 The 40PFL7605H’s intense natural brightness also helps the reproduction of dark scenes by ensuring there’s always an impressive amount of shadow detail on show. A particularly good example of this can be seen in the first big poker scene in ”Casino Royale” where, even with the picture calibrated to a contrast point suited to movies and a darkened room environment, the black suits of the players look textured and natural rather than one-dimensional black hollows, as can happen with many other LCD TVs that try to deliver a black colour as deep and believable as the 40PFL7605H’s.


Another massive string to the 40PFL7605H’s bow is its sharpness. This is at its most obvious, naturally, when viewing HD material, as the screen effortlessly pulls out every tiny detail, from individual pores and hairs to whatever grain the HD source might contain.


Even more startling, in a way, is the immense crispness the set delivers with standard definition sources, thanks to the power and cleverness of the pixel interpolation element of the Pixel Precise HD processing. What’s particularly excellent about this is that the extra sharpness isn’t accompanied by a nasty increase in grain and other picture noise, as is often the case with standard def resolution boosters – including older versions of Philips’ own processing systems.

Yet more great news concerns the 40PFL7605H’s colours, which benefit from both the extra intensity kick edge LED frequently delivers and Philips’ own unusual talent for reaching saturation levels other brands struggle to reach. Though they do this without becoming overblown and unnatural.


We were mostly impressed with the 40PFL7605H’s motion handling too, with a few cautions we’ll get to in a moment. The 100Hz engine reduces motion resolution loss while causing practically no artefacting, while the Natural Motion system can pretty much eliminate judder, even at its lowest setting. 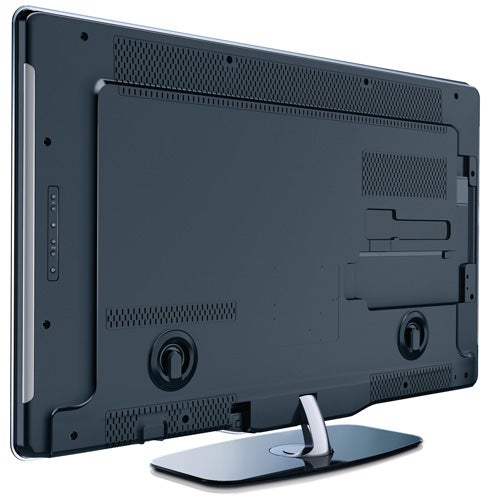 However, it’s also the Natural Motion system that introduces our first issue with the 40PFL7605H. For even at its lowest setting it can produce noticeable artefacts, such as the occasional halo around moving objects, or flickering with fast moving edges.


These issues are much reduced with Philips’ more powerful Perfect Pixel HD engine models, and in the end were sufficiently troublesome to cause us to turn Natural Motion off when watching Blu-rays. But the key point here is that you can choose whether to use Natural Motion or not; it’s not forced upon you. 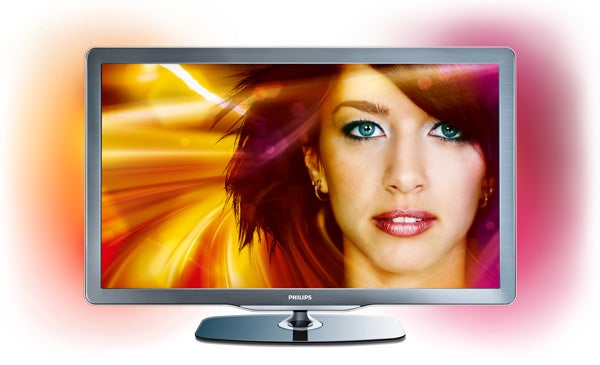 Actually, the occasional subtle flare or halo around bright objects in predominantly dark scenes remains no matter what settings you use. But this is a very minor point versus our main one, which is that nearly everything that can go wrong with the 40PFL7605H’s pictures can be put right via the multitudinous options at your disposal.


The 40PFL7605H even outguns most of its skinny rivals with its audio. There’s not quite the same outstanding clarity, bass punch and dynamism you get with the brand’s flagship 9000 series, but the two woofers mounted on the set’s rear certainly produce a bigger, more open and thus clearer sound than the paper-thin sound stages commonly witnessed with edge LED TVs.


As usual with a Philips TV, you can royally screw the 40PFL7605H’s pictures up if you’re not careful with its processing options. But honestly, it’s really not that difficult to learn your way round. And once you’ve figured out what works for your personal tastes and what doesn’t, and what works for certain source types and what doesn’t, you’ll frequently be left staring agog at arguably the best edge LED picture we’ve seen for under a grand.


So yes, the 40PFL7605H doesn’t have a Freeview HD tuner. So yes, aggravatingly you’ll have to add an external HD tuner of some sort. But for us, a TV’s heart and soul lies in its AV performance, and in this respect the 40PFL7605H is a TV you dismiss at your peril.